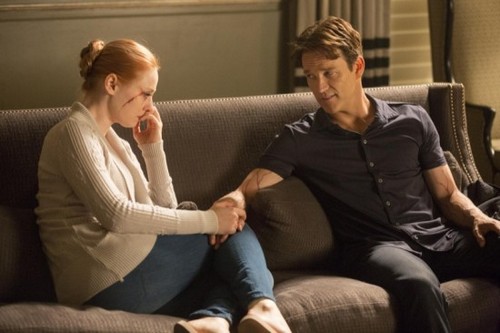 Tonight, TRUE BLOOD returns for its sixth episode of season 7 called “May Be the Last Time.” On tonight’s episode, Sookie looks for a miracle; Eric and Pam zero in on Sarah Newlin; Adilyn and Wade seek protection from Violet.

On the last episode, a shocking discovery forced Sookie (Anna Paquin) to reassess her recent involvement with Bill (Stephen Moyer). In Dallas, Eric (Alexander Skarsgard) and Pam (Kristin Bauer van Straten) forged an unlikely alliance in their hunt for a shared nemesis. Andy (Chris Bauer) bickered with Holly (Lauren Bowles) about their children’s behavior; Lafayette (Nelsan Ellis) shared a vision with Lettie Mae (Adina Porter); Jason (Ryan Kwanten) owned up to his true feelings about Violet (Karolina Wydra); Sam (Sam Trammell) found himself in a quandary regarding Nicole (Jurnee Smollett-Bell). Did you watch the last episode? If you missed it, then we have a full and detailed recap, right here for your enjoyment.

Tonight’s new episode is going to be a bloody exciting one and you’re not going to want to miss it. So be sure to tune in for our live coverage of HBO’s True Blood’s seventh episode of season 7 called “May Be the Last Time” tonight at 9PM EST! Remember to also bookmark Celeb Dirty Laundry and check back here for our live True Blood recaps, reviews, news, and spoilers! In the meantime, check out a sneak peek of tonight’s episode below.

Tonight’s episode opens up where we left off last week with Eric and Pam visiting Sarah Newlin’s sister.  Sarah’s sister is refusing to answer questions.  Mr. Gus asks her if she likes money.  She tells Mr. Gus that her sister is a good person and she is the cure.  Eric tells her that her sister Sarah or newme as Sarah is called now killed her man Jeremy.  Pam tells her to stop wasting time and tell them where she is.

She screams F YOU! and Eric Stakes her as Pam and Mr. Gus look on horrified.

Andy and Holly show up at the tree house looking for Adilyn and Wade but they are not there.

Bill is with Jessica and Sookie and she does not understand why the virus is spreading so fast on Bill.  Sookie is worried it is because she is fey.

Andy calls Bill he is looking for Jessica – he asks Jessica if she has felt Adilyn being in trouble.  Jessica lets Andy know that she has not felt anything, she promises to call Andy if she feels anything.

Andy is relieved that Adilyn is alive but wonders where they are.  Holly thinks maybe they went to Brian’s Lake House in Oklahoma.

Meanwhile Adilyn and Wade are at Violet’s house and Violet is working it being all sympathetic.  She takes them into a room with lots of sex toys.  Adilyn thanks Violet and Violet tells her she just likes to see, “love flourish.”  She then grabs Adilyn and plants a big kiss on her lips.  She leaves the room with a, “have fun f*cking.

Sookie is upset that Bill is sick and refuses to accept that there is no cure.

Arlene is turning the lights out at Bellefleur’s and she hears a noise and Keith (vampire who saved her) is there.  He does not think it is safe for her to go home alone and he has come to walk her.

Arlene lets him know she is not a fangbanger and he walks up and kisses her and asks her if, “that feels wrong.”  That all it took Arlen and Keith start ripping off each other’s clothes.  They end up on the table making out.

Oops Arlene wakes up and it was a dream…

Meanwhile back with Pam and Eric, Pam is not pleased that Eric killed Sarah Newlin’s sister.  Pam asks if he wants to die, Pam tells Eric that Sarah is the cure and they need to capture her.   Mr. Gus comes in, he has a proposition he wants them to help him find Sarah Newlin they will take her blood and synthesize it.  They will make NuBlood and distribute it to all the infected.  He wants Eric to be the spokesperson for the NuBlood.

Mr. Gus tells them his word is oak.  Eric finally agrees and tells Mr. Gus he gives his work, Mr. Gus has trouble believing him.

Jessica is going to watch over Bill but Sookie suggest that she crawl in bed with Bill because she sees Jessica is tired.  Jessica asks Sookie what she is going to do because Sookie refuses to believe Bill is going to die.  Sookie tells Jessica she knows there is a miracle out there waiting for Bill and she is going to go and find it.

Flashback: Bill is having a flashback when he was human and his father insists he marry someone of his choosing.

Current time: Hoyt and his girlfriend Bridgitte are back in Bon Temps he walks into Bellefleurs (old Merlottes) with his girl.  Arlene gives Hoyt her condolences.  After talking to Hoyt Arlene realizes that Hoyt does not remember Jason she runs over to call Jason.  Jason tells her to not tell Wade anything.

Adily and Wade are looking at all Violet’s lotion, potion and toys – the both realize that they are not interested in any of those things.

Flashback: Bill is remembering when he met his wife Caroline.  Caroline tells Bill he is not what she expected she is pleasantly pleased and so is Bill upon seeing her.

Sookie has brought Doctor Ludwig to see Bill.  Sookie is not pleased by Doctor Ludwig’s bedside manner.  She tells Sookie she has seen the virus accelerated when the person who infected the vampire was fey but not like Bill’s virus is accelerating.  The Doctor asks Sookie who her family is.  Once she finds out that Sookie is related to Niall she hightails it out of the room.

Meanwhile Hoyt is with his girlfriend and he is broken up because he has just seen the body of his mother Maxime.  Bridgitte asks Jason to go and talk to Hoyt because he is so upset.  Jason tells Hoyt how his mother died.

Sookie goes to the graveyard and tries to speak to her grandpa Niall – she tells him she has not called on her fairy godfather until now.  She has always thought of herself as strong but she isn’t.  She wants him to materialize.

He does not show up and she leaves but when she gets home Grandpa Niall is there.  She wants him to help her to save Bill and then she finds out that he has been watching her.  Then she realizes that he saw her infect Bill and wonders why he did not stop her.  He tells her it is because he does not like Bill for her.  Sookie begs him to help her and he agrees to do what he can.

Meanwhile over with Sarah Newlin she is walking and she sees what she thinks is Jason and she is glad to see him.  Jason tells Sarah that she is going to die that night because Eric is coming for her.  Sarah tells Jason he is not real.  She is hallucinating.

Sam is at Bellefleurs talking to Arlene.  Sam wants to know if Nicole is right and the town is crazy.  He does not want to leave the town like Nicole wants him to, he wonders at what point does, “the guy whose house keeps getting hit by a tornado leave?”

Andy and Holly are at the Lake House but Wade and Adilyn are not there.  Andy is upset and Holly promises him that everything will work out.

Niall wants to channel nature to get help with a solution for Bill.

Flashback: Bill is remember when he was human and when his wife gave birth.

Niall and Sookie see the flashback and Sookie gets mad at Niall and tells him she wants a miracle for Bill.  Niall tells Sookie that he wants to give her advice that there are some things that can be fixed with magic but Bill cannot be saved.

Sookie is upset she thanks him for the life lesson and asks him to leave.

Lafayette and his Aunt are digging in their old yard.

Arlene is at Bellefleur and she is drinking and listening to music and Keith walks in.  He felt her pain.  He takes her hand and starts to dance with her.  She is confused because she thought he would only be able to feel her if she was in danger.  Keith tells her that her pain was dangerous.  Arlene informs Keith that she is Hep V positive and they cannot have sex.  He replied, “fine lets dance.”

Violet is sleeping and she wakes up and goes into Adilyn and Wade’s room.  Adilyn tells Violet they did not use any of her toys.  Violet tells her it is okay because they are going to use them now.  She slaps Wade into a wall and puts handcuffs on Adilyn.  Jessica wakes up from her sleep and feels Adilyn is in danger.

Eric wakes Pam up and they go into the room Mr. Gus asks if they are ready they found Sarah.

Sookie runs to Bill’s place and goes in, she tells Bill she is going to stay with him until the end.  They kiss.

Sarah is having hallucinations – she is seeing her husband, her yoga instructor.  they are fighting to have her die as a Buddha or a Christian.  Sarah tells them she chooses her because she is the cure.  Then she sees Jason who tells her death is coming for her.

Mr. Gus, his men, Eric and Pam show up outside where Sarah is.

Sookie and Bill are making love.