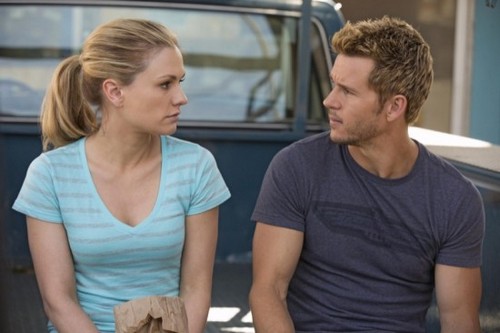 Tonight, TRUE BLOOD returns for its sixth episode of season 7 called “Karma.” On tonight’s episode, Eric and Pam find a new ally in their search for a common enemy; Sookie makes a startling discovery that forces her to rethink her recent involvement with Bill; Lafayette shares a vision with Lettie Mae; Jason realizes how he really feels about Violet; and Sam isn’t sure what to do about Nicole.

On the last episode, Eric and Pam went to Dallas for a fundraiser, but they were also on the lookout for an elusive foe. Meanwhile, Sookie was a reluctant host for a mainstreaming party in Bon Temps; Andy carefully considered an important decision; and Bill recalled his human history. Did you watch the last episode? If you missed it, then we have a full and detailed recap right here for your enjoyment.

Tonight’s new episode is going to be a bloody exciting one and you’re not going to want to miss it. So be sure to tune in for our live coverage of HBO’s True Blood’s sixth episode of season 7 called “Karma” tonight at 9PM EST! Remember to also bookmark Celeb Dirty Laundry and check back here for our live True Blood recaps, reviews, news, and spoilers! In the meantime, check out a sneak peek of tonight’s episode below.

Pam and Eric fight the Yakuza. The Yakuza capture Pam and Eric and take them to Yakonoma Corp. They’re thrown in an interrogation room, one that apparently has windows. “Our first sunrise together,” says Eric.

Bill wakes up and is attempting to cope with the recent news: He’s contracted Hep-V. He calls someone on the phone and Jessica overhears that he’s contracted the disease.

Lafayette returns home and James is waiting for him. He returns with Lettie Mae. She continues rattling off about how she wants vampire blood to reconnect with with Tara. James agrees to give her some of his blood, as he believes substances can elevate one’s consciousness.

Jason returns home after his scandalous affair with Jessica. Violet has prepared the house for a romantic night in. She says, “When I told you that you were mine, I forgot to tell you that I am yours.”

Meanwhile, Pam and Eric are locked up, left to meet the True Death at the hand of the rising sun. The president of the Yakanoma Corp comes into visit them, and he’s seeking information regarding Sarah Newlin. He asks if they have any information. Pam says that she’ll tell him all they know in exchange for their freedom. Eric adds tot he conditions: he’ll be the one to kill her.

We see Sarah on the run.

She sneaks into her sister’s house. Her sister attacks her but then gets sick and passes out.

Jessica calls Jason to ask for a favor. She wants him to go get Sookie and bring her over to Bill’s house. She says it’s very important. Jason says he’ll be there as soon as he can. Violet overhears everything and, once Jason leaves, grows outraged.

Andy wakes up in the morning and catches his daughter and Holly’s son having sex. Andy gets pissed and chases him out to the lawn. Holly, protective of her son, tells Andy that he better not hit him ever again or there’ll be consequences.

Jason delivers Sookie to Bill’s house. There, Jessica reveals that she overheard Bill tell someone that he’s Hep-V positive. Sookie is understandably shocked. Sookie realizes that maybe she was exposed to Hep-V when the Hep-V vamps attacked her recently. She demands Jason to take her to the clinic immediately.

Meanwhile, Bill waits patiently at the office. His veins are doing something interesting, and the man next to him reveals that he’s never seen Hep-V behave like that before.

Sookie gets tested for Hep-V.

Jason wants to take her home but Sookie doesn’t want to return home.

Lettie and Lafayette continue parading through their vision. Tara leads them to their old house and begins digging in the yard. The Minister arrives and pulls Lettie Mae out of the vision. Both she and Lafayette are angry that their connection was severed. Lafayette now believes Tara is trying to contact them. He wants to visit their old house to see if there might be something there.

Andy and Holly attempt to reconcile after the situation with their two children.

Jason and Sookie sit outside a minimart and she reveals that she can still sense Bill. Later, Sookie gets a phone call from the clinic. It appears as if she’s positive for Hep-V.

Meanwhile, Bill’s Hep-V is progressing unnaturally quick. At the law office, Bill tries to pass over his estate to Jessica, but current inheritance laws are proving to be a barrier.

Sarah’s sister didn’t die, but she wakes up to a whining Sarah Newlin. Sarah tries to convince her that she’s a new person, but her sister isn’t really having it. Eventually, Sarah reveals that she possesses the antidote to Hep-V. When her facility was attacked, she drank the antidote and now, it seems, the cure to everyone’s troubles runs through Sarah’s veins.

Jason returns home and prepares to break up with Violet. He checks all over the house for her; he goes down into the basement and finds a note that says she’s left him.

Next, we see Violet arrive at Fort B. She tricks the kids into coming with her before Holly and Andy can arrive to bring them home.

Eric, Pam, and the Yakuza show up at Sarah’s sister’s house. She answers the door. She’s been cured of Hep-V.

Meanwhile, Bill isn’t doing so hot. He returns home to find both Sookie and Jessica crying up a storm. He shuts the door.