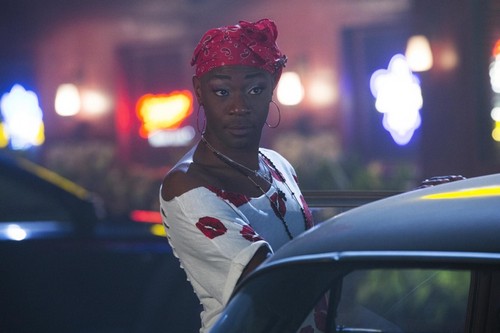 Tonight, TRUE BLOOD returns for its ninth and penultimate episode of season 7 called “Love Is to Die.” On tonight’s episode, Hoyt’s reminded of the past; Bill pushes Sookie away; Sam makes a difficult choice; Eric faces a dilemma when he’s caught in a lie.

On the last episode, with his prey in sight, Eric reconsidered his end-game strategies against Sarah. Sookie put her life at risk in hopes of saving Bill. Lettie Mae (Adina Porter) and Lafayette (Nelsan Ellis) urged Reverend Daniels (Gregg Daniel) to join them in their V-fueled search for Tara (Rutina Wesley). Violet (Karolina Wydra) eyes payback against those who betrayed her, while an old love was reborn for others. Did you watch the last episode? If you missed it, then we have a full and detailed recap, right here for your enjoyment.

Tonight’s new episode is going to be a bloody exciting one and you’re not going to want to miss it. So be sure to tune in for our live coverage of HBO’s True Blood’s ninth episode of season 7 called “Love Is to Die” tonight at 9PM EST! Remember to also bookmark Celeb Dirty Laundry and check back here for our live True Blood recaps, reviews, news, and spoilers! In the meantime, check out a sneak peek of tonight’s episode below.

Tonight’s episode opens up where we left off last week with Bill refusing the cure because he has accepted his fate.  Sookie tries to convince him that he cannot hide behind fate that Sarah Newlin is his fate and his destiny.

Sookie tells Bill he is making a choice that Jessica and her will have to live with.  Bill agrees that he is making a choice, he is choosing the True Death.  Jessica tells him to F off.  Sookie slaps him and asks him why.  Bill tells her, “he can’t.”  Sookie slaps him again and then goes to do it again and Eric stops Sookie and tells them they should leave.  He warns them not to say anything about Sarah.

Jessica asks Bill to release her.  Bill tells Jessica he is proud of the vampire she has become and he knows she will stand on her two-feet when he is gone, he releases her.  Jessica sobs, Pam comforts her.  Bill leaves….  Eric comforts Sookie..

Jessica and Sookie goes to Sam’s place and his place is empty.  There are two envelopes on the table.  One is for Sookie, Sam left her a note telling her he has left.  Sam loves Nicole and he is not going to miss his baby growing up and since Nicole wants to leave so is he.  The letter is a goodbye to Sookie, he is moving to Chicago and he wants Sookie to come out and visit him and Nicole once the baby is born.  His final note from Sam, “Know that I love you!”

Jessica and Sookie head over to Bellefleurs.  Arlene has decided she is going to open up because she cannot keep waiting till people come back.  Sookie tells everyone at Bellefleurs that Sam is gone.  She asks to speak to Andy in private.  She gives Andy a letter Sam left him.  The letter to Andy is simply Sam’s resignation letter.

Meanwhile James apologizes to Jessica.  Jessica admits to James that she does not know much about him and she apologizes for not asking and not caring.  Jessica wants to know if James is happy with Lafayette.  James replies, “I think we are going to be.”  Jessica is happy for them and asks James to make sure Sookie gets home safety.

Hoyt’s girlfriend, Bridget is upset because Hoyt said he did not want to have children.  Bridget is jealous of Jessica and lets him know she is.  Hoyt tells Bridget that he knows Jessica’s maker, Bill and not Jessica.  Bridget apologizes for being jealous.

All of a sudden Jessica knocks on the door and Bridget answers and wants to know what Jessica wants.  Jessica has come to tell Hoyt that they use to be together and they were so happy.  Jessica tells Hoyt she messed up.  Bridget tells Hoyt she does not want to listen and if Hoyt wants to listen then he should go outside and then Hoyt and Bridget are through.  Hoyt leaves and goes after Jessica and Bridget sobs.

Jessica tells Hoyt that Bill released her and that Bill decided not to take the cure.  Jessica does not understand why Bill did not take the cure.  Jessica hoped that Hoyt would understand because he was the first man she ever loved.  She apologizes for ruining Hoyt’s relationship with his girlfriend and tells him that she is the most selfish person.

Hoyt tells Jessica to catch her breath and tell him the story of them.

Back with Jason, Bridget calls him and asks him to come and get her.  Bridget tells Jason that Jessica showed up and Jason tells her he is coming.

Back over at Bellefleurs everyone is sitting to eat and Sookie is apart she is upset.  Arlene tells Sookie that she and Keith are dating and they are taking it slowly.  Sookie tells Arlene that Bill is dying because of her and he is going fast.  Sookie wants to know how Arlene keeps going on.  Arlene says, “It helps when your dead husband comes to you in a death vision.”

Bill is upset because he had a dream that Sookie was rocking his baby and when he went over to look at the baby it was a voice.  Sookie had given birth to death.  Bill feels that is all he is too her.  Bill wants to set Sookie free.  Bill wants Eric to ask Sookie if he will see her that night so he can explain to her.  Bill tells Eric it is the last favor he will ask for.  Eric promises to do it.

Jason shows up where Hoyt and Jessica are talking and Hoyt punches him and knocks him out.  When he wakes up he is in the squad car and Bridget is driving she wants to take him to the hospital.  Jason convinces him not to, he convinces her to take him to his house.  Jason warns her they are not having sex.

Bridget is trying to get a plane ticket back to Alaska without much luck, she would have to pay $1,200.  Jason takes the phone and tries to sweet talk the agent and is successful.

Jason goes back to the living room and tries to convince himself he is not going back into the room to see Bridget.

Over with Hoyt and Jessica, Hoyt has ice on his hand.  He clarifies that when Jessica and Hoyt broke up she was not ready.  Jessica agrees she was too young, not grown up and home-schooled she had not figured out who she was or what she wanted.  Hoyt tells Jessica she can heal his hand.

Meanwhile Pam has foils in Sarah’s hair and she tells the men that are guarding her that she needs to take the gag off.  Pam tells Sarah not to start screaming or the men will kill them.  Sarah asks Pam if they are going to sell her.  Pam agree they are going to and if Sarah plays her cards right she could become the highest paid trollop in history.

Over at Jason’s Bridget comes in to see Jason, she is starving.  Jason tells her he only has beer, she replies, “beer is good.”  Bridget tells Jason he is a good man but Jason tells her he is not and starts telling her about Jessica.  At the end he tells Bridget that Jessica erased Hoyt’s memory and he does not remember her.  So Hoyt never lied to her.  Jason then tells Bridget that Hoyt and Jessica belongs with each other.

Over at Hoyt’s he is kissing Jessica and they are making out.

Bridget asks Jason to come to bed she is going to teach him how not to have sex with someone.

Sookie is leaving and Eric calls out he wants to talk to her. Eric asks Sookie to speak to Bill, Sookie is scared. Sookie wants to know what Bill will say, Eric says, “That he is doing it for you.”

Jason and Bridget are lying in bed apart from each other and Jason tells her it feels weird. Bridget asks him one thing that no one knows about him. Bridget decides to start, she says she cheated on an exam once. Jason replies, “Oh no, you’re a stone cold criminal!” LOL Jason’s turn, Jason tells her he likes pink. Bridget asks for something else. Jason tells Bridget he really, really wants kids but he is afraid if he has a girl she might meet someone like him.

Eric gives Sookie a lift home. Sookie invites him inside but Eric wishes him goodnight. Sookie’s phone is ringing and it is Bill he wants to call on her. He is on his way. Bill walks through the Compton graveyard.

Eric shows up at Fantasia and Ginger bitches him out for not telling him he was cured. Eric apologizes and tells her he is going to make it up to her by F**king her.. He asks where she wants to and Ginger replies, “on the throne.” Eric agrees on the throne it is. Eric sits down and Ginger straddles him… he bites her and she asks what about her Hep V and Eric tells her he is immune. All of a sudden about 2 seconds later Ginger starts screaming and tells Eric it was fantastic. Eric gets up, asks her if she is okay and walks out.

Eric goes to find Pam and she is not there. He runs to the basement. Pam is tied to a table and she has silver around her throat there is a stake above her. Mr. Gus is furious because he feels Eric betrayed her.  Mr. Gus asks Eric if Sookie Stackhouse knows?  Eric refuses to answer Mr. Gus tells his henchman to cut the rope and Pam will be staked.  Eric screams, “stop!”

Meanwhile Bill arrives at Sookie’s house and he stands there and looks in at her.