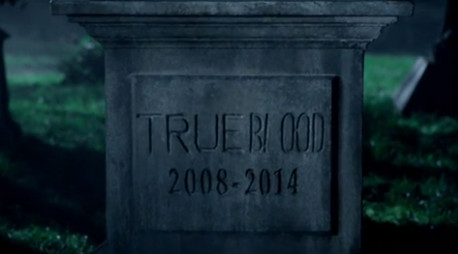 True Blood has filled our summer evenings with some of the most exciting, WTF paranormal moments over the past years and, once the upcoming season 7 concludes, that’ll be it for the powerhouse HBO franchise. Sookie, Bill, and all our other fave (and slightly crazed) supernaturals will return on June 22nd. You better sharpen those fangs and prepare yourselves. This is definitely going to be a season you won’t want to miss.

The first promo trailer released for True Blood season 7 doesn’t give much away in terms of actual footage; rather, it just makes you feel extremely saddened by the fact the show’s ending. The vid takes us to the Bon Temps cemetery and shows us all the gravestones of those who’ve passed away. “True Blood, 2008-2014” reads the last tombstone. Ah, so many feels!

It will be interesting to see what takes center stage this season and with whom Sookie will end up: Will it be whiny-brat-annoying Bill Compton or the-man-who’s-always-secretly-loved-her Eric Northman? When HBO announced that the series would be concluding, HBO head Michael Lombardo released this statement:

“True Blood has been nothing short of a defining show for HBO. Alan Ball took the books by Charlaine Harris, assembled a brilliant cast led by the magnificent Anna Paquin in the role of Sookie Stackhouse, and crafted a show that has taken its many devoted fans on an unforgettable journey. Alan passed the baton to Brian Buckner, who led our fantastic writers and crew in crafting a spectacular sixth season, and he will lead us through the seventh and final season of this amazing show.”

What are you most looking forward to this season?