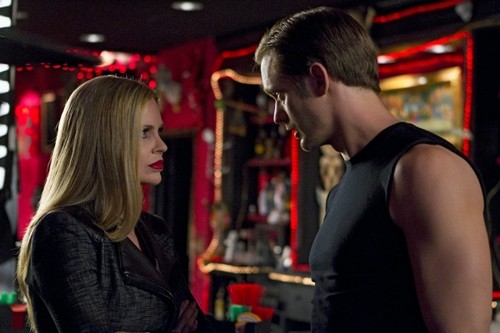 True Blood was back tonight and it was intense, Bill finds out he is Hep-V and started to put his affairs in order. Sookie found out that she was infected and she was the one who infected Bill.  So much more happened and if you are like me and you are anxiously awaiting each episode, we have managed to get our hands on a sneak peek video and some spoilers to whet your appetite for next week’s episode 7 called “May Be The Last Time.”  So sink your fangs in and enjoy!

On tonight’s episode, a shocking discovery forced Sookie to reassess her recent involvement with Bill. In Dallas, Eric and Pam forged an unlikely alliance with the owner of the The Yakamoto Corporation in their hunt for Sarah Newlin. Andy bickered with Holly about their children’s behavior; Lafayette  shared a vision with Lettie Mae; Jason owned up to his true feelings about Violet.  Sam found himself in a quandary regarding Nicole who wanted him to move from Bon Temps.  And lot’s more happened — did you watch the episode?  If you missed it we have a full and detailed recap, right here for you.

Spoiler alert: If you’re one of those people who doesn’t like spoilers, stop reading now! We have some juicy spoilers for you about the season 7 episode 7 of HBO’s “True Blood.”

Official HBO synopsis of next week’s episode: “Sookie is going to look for a miracle. Eric and Pam are going to zero in on Sarah Newlin. Adilyn and Wade will seek protection from Violet.”  Guest stars will include: Noah Matthews as Wade, Nathan Parsons as James.

On next week’s episode Eric and Pam know that Sarah Newlin is the cure and they try to get Sarah’s sister to tell them where she is.  Meanwhile Sookie is so guity about infecting Bill that she is determined to save him.  Violet has Adilyn and Wade at her place.  Andy enlists Jessica to help him locate Adilyn.

True Blood episode 7, “May Be The Last Time” airs on HBO on August 3rd, 2014.   Check out the preview video below of episode 7 below and let us know in the comments below what you think!  Are you enjoying season 7 of True Blood?  I am loving it and next week’s episode is going to be so intense! Make sure to check out the preview clip below!