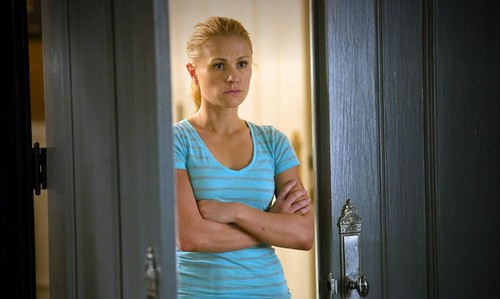 True Blood was back tonight and it was all kinds of intense can you believe next week is already the penultimate episode.  It seems like the season just started.  So much more happened tonight and if you are like me and you are anxiously awaiting each episode, we have managed to get our hands on a sneak peek video and some spoilers to whet your appetite for next week’s episode 9 called “Love Is to Die.”  So sink your fangs in and enjoy!

On tonight’s episode Eric found Sarah Newlin and just as he was about to kill Sarah Pam stopped him.  Eric did not kill Sarah but fed off her and was cured. Sookie put her life at risk in hopes of saving Bill. Lettie Mae (Adina Porter) and Lafayette (Nelsan Ellis) urged Reverend Daniels (Gregg Daniel) to join them in their V-fueled search for Tara (Rutina Wesley). Violet (Karolina Wydra) eyed payback against Jason & Jessica for betraying her, but it did not end like she expected.  And lot’s more happened — did you watch the episode? If you missed it we have a full and detailed recap, right here for you.

Spoiler alert: If you’re one of those people who doesn’t like spoilers, stop reading now! We have some juicy spoilers for you about the season 7 episode 9 of HBO’s “True Blood.”

On next week’s episode both Jessica and Sookie are shocked that Bill will not feed off Sarah Newlin.  Bill feels it is his fate that led him to the point he is at and does not want to drink Sarah’s cure.  Bill is feeling like he and Eric are death and that is all they can give Sookie.  So much more is going to happen, check the video below!

True Blood episode 8, “Love Is to Die” airs on HBO on August 17th, 2014.   Check out the preview video below of episode 7 below and let us know in the comments below what you think!  Are you enjoying season 7 the final season of True Blood?  I am loving it and next week’s episode is going to be so intense! Make sure to check out the preview clip below!