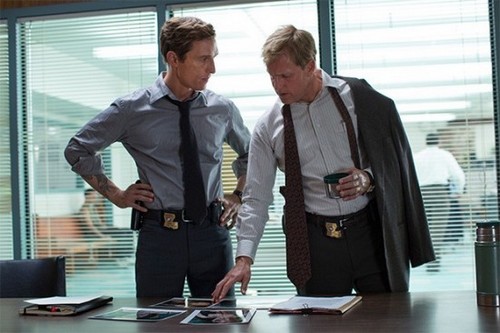 Tonight on HBO their new crime drama TRUE DETECTIVE airs a new episode called, “Seeing Things.  On tonight’s episode with his marriage to Maggie already strained by work, Hart finds respite away from home.  Did you watch last week’s premiere episode?  We did and we recapped it right here for you.

On last week’s premiere episode investigators took another look at a 1995 murder when a similar case occurred in 2012 in this drama, which began with Martin Hart and Rust Cohle, former partners in Louisiana’s Criminal Investigation Division, looking back on the original crime and its effect on their personal and professional lives.

On tonight’s show under pressure to land a suspect in the Lange murder, Quesada warns Hart and Cohle that they might be replaced by three detectives from a new task force. The pair lobbies for extra time to follow up on a lead that takes them from a rural cathouse to an incinerated church. With his marriage to Maggie already strained by work, Hart finds respite away from home.

We will be live blogging True Detectives episode 2 with all the up-to-the-minute details at 9PM EST so make sure to come back to this spot and watch the show with us.   Make sure to refresh often so you get the most current info!  While you wait for the episode you can catch a sneak peek of tonight’s episode BELOW!

RECAP: Rust mentions that he often thinks about his daughter and wife; he says that sometimes when he drinks he talks too much. Rust takes a smoke and we go to the past seeing this weird bird trap thing sitting on his desk; Martin brings him over a cup of coffee. Martin and Rust go to talk to a woman about her dead daughter; she is shocked that it was her child that has died. The woman says her husband died in a car accident in 1984; she mentions how her daughter has always got in trouble and went to some church. Martin asks about the church and she says she doesn’t know, the woman starts getting this little attack and doesn’t answer the question.

Martin and Rust are in the car now driving off, Martin asks about Rust’s mom and Rust mentions she might be alive. Martin now in the future mentions that Rust never spoke about his parents and that Rust tend to not admit to things at times; Martin and Rust go to meet another woman questioning the dead girl. The woman says that the girl was always loopy and high talking about a church she went to, Martin asks where the church is and once again no leads. They are told that she used to stay at a shelter for girls.

Martin mentions seeing a man kill a girl and regretted chopping her up and pieced her back together; Rust believes that this murder isn’t like that at all it was something planned like a ritual.

Rust now gets flash backs of his daughter and wife while he is sitting in his room alone; we then see Martin waking up happily with his whole family.

Martin asks why Rust didn’t leave dinner when he went to take a call; Rust says that he sobered up a little and it wasn’t as bad as he thought to be around Martin’s family; Rust liked talking to them. Rust mentions his wife and that his daughter died at 2 year old in an accident and his wife couldn’t handle it; Martin says that he is sorry about his child’s death.

Martin calls someone and tells them he wants to meet and it’s a woman; he says he has a surprise for her and she says she can’t wait for his surprise. Martin drives up to this apartment with some alcohol and meets with another woman, he brings her some hand cuffs. The woman uses the hand cuffs and has him cuffed to the shelf behind him; they then start going at each other.

Rust is on the road by himself and mentions about visions he used to get; he would get memories of his time under cover for 4 years in a drug trafficking. Rust is in some room and she is taking pills; Rust hands her some money and pays for a bottle. She offers to sleep with him and then Rust declines her; she asks him what he does but then says never mind. Rust says he is not interested in her, she thinks he’s dangerous; Rust mentions he is a police officer and can do really dangerous things.

Martin is with the woman and mentions how he wanted to stop by on another time but she was out with some friends; Martin explains that there is a man who is killing girls and that she should be careful. He also tells her about there are more girls who have been killed and that he has been doing it for a while; martin tells her to stay home and take a drink instead.

Martin says good morning to Rust at work and Rust tells Martin he has found a lead down South; Rust even knows that Martin was with another girl. Martin says that he should keep his nose out of his business; Martin slams Rust against the locker. Rust tells him he knows that he saw another woman because he is wearing the same clothes as yesterday and is very aggressive when questioned; which makes it obvious. Martin lets him go and Rust just goes ahead and gets dressed.

Martin and Rust are in the car and drive out to a garage; they ask about where they could find a whore house somewhere in the woods. The men say they don’t know but as Martin walks back to the car; Rust walks in and beats the two guys till they tell him what he wants.

The two arrive at some sort of ground where there are a bunch of woman around; Martin and Rust walk up to a woman mentioning they are part of the police. Rust calls it a hillbilly ranch and they show the woman a picture of the girl that is dead; a girl who was friend with the dead girl says they were close. Rust asks if she has any idea where the dead girl was staying for the last couple of weeks, the friend mentions she was going to church; Martin says they will have to question any girls who knew her. The friend goes ahead and gets a bag the dead girl left there; Rust goes with her.

Martin mentions to the owner of the loft because he knows the friend of the dead girl is not 18 and much younger; Rust comes back and says they have been very helpful and the two leave but Martin hands some money to the younger; telling her to do something else.

In the bag Martin and Rust read the dead girls diary; inside they find a poster for a church and they decide that they should go check it out. In the future Rust talks about his daughter Sophia and that she was on her tricycle; a car hit his daughter and then his marriage completely failed after it all. Rust then talks about his time in the cartel and that he killed 4 men; he was offered a pension after his time but he decided to just get a transfer to homicide.

Martin is walking around with Maggie’s father and talk about work; Maggie his wife is talking to her mother. Martin tells Maggie that there is a lead he wanted to check up on it; he then mentions that they should leave soon because of it.

Rust is going around questioning people about the dead girl on his own time, he goes up to random girls on the street asking if they know the dead girl. Martin at home tells Maggie that there is nowhere else he wants to be; Martin starts getting upset because he worked so long and wished that going home would be his place of peace. The two fight and Martin starts to drink; Martin is walking to his daughters room and tells them that dinner is ready.

At work Rust says to some other co-workers that they can look at all the evidence they found and tells them to pretend to be good cops. Rust is told by a superior that he has to keep his opinions to himself; he doesn’t watch Rust and says that he is only there because of Martin. He tells Rust to shut up, they want more leads and believe they are stalling. Rust says they have leads but their superior tells hi mto screw off; Rust raises his hand and says that they have a lead on a church and they believe their victim spent a lot of time there.

Martin says that they should get the rest of the month before anything happens; Martin and Rust walk out.

Martin and Rust are on their way to the church they found on a flyer they found in the dead girls diary;they see some weird building up ahead and start driving up to it.