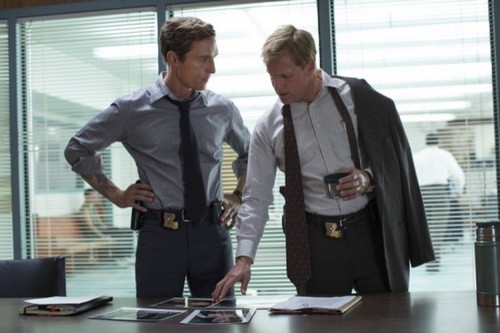 Tonight on HBO their new crime drama TRUE DETECTIVE airs a new episode called, “The Locked Room.  On tonight’s episode Cohle pores over old case files, finding a connection with a woman assumed to have drowned years earlier..  Did you watch last week’s premiere episode?  We did and we recapped it right here for you.

On last week’s episode under pressure to land a suspect in the Lange murder, Quesada warned Hart and Cohle that they might be replaced by three detectives from a new task force. The pair lobbies for extra time to follow up on a lead that took them from a rural cathouse to an incinerated church. With his marriage to Maggie already strained by work, Hart found respite away from home.

On tonight’s episode a hidden image at the burned-out church leads Cohle and Hart to Joel Theriot, a tent-revival minister whose parishioners finger a scarred “tall man” seen with Dora Lange. Brought in for interrogation, a sex offender matching the description is quickly dismissed by Cohle, despite offering a confession. Hart gets sidetracked after Maggie sets Cohle up with a friend at a C&W bar. Looking to establish a pattern of murder, Cohle pores over old case files, finding a connection with a woman assumed to have drowned years earlier.

We will be live blogging True Detectives episode 2 with all the up-to-the-minute details at 9PM EST so make sure to come back to this spot and watch the show with us.   Make sure to refresh often so you get the most current info!  While you wait for the episode you can catch a sneak peek of tonight’s episode BELOW!

On last week’s episode a hidden image at the burned-out church leads Cohle and Hart to Joel Theriot, a tent-revival minister whose parishioners finger a scarred “tall man” seen with Dora Lange. Brought in for interrogation, a sex offender matching the description is quickly dismissed by Cohle, despite offering a confession. Hart gets sidetracked after Maggie sets Cohle up with a friend at a C&W bar. Looking to establish a pattern of murder, Cohle pores over old case files, finding a connection with a woman assumed to have drowned years earlier.

The week’s episode begins with Cohle and Hart listening quietly watching the parishioners as they hang on every word that comes out of their leading minister’s mouth, as they shout in agreement while in a cult-like trance. Cohle’s cynical side comes through as he comments on the IQ and social status of the members, sharing his belief that they are very simple-minded folk who would believe anything. Hart calls him on his skepticism and they move on to talking with the minister and a couple parishioners about the church and the whereabouts of some followers. Theriot, as the minister, encourages Cohle to speak to one of the followers, who happens to be mentally-disabled. While Hart thinks they may be upon a lead, Cohle quickly shares that the boy could not possibly be involved as they drive away with Cohle sharing his belief that there must be more victims based on the way the murder was played out.

Later, while pondering over a meal, Cohle shares his desire to go back and pour over more files that may include related cases that could provide a clue.

Cohle ends up in Hart’s kitchen as Maggie provides some life advice to him after mowing the lawn. Cohle asks Maggie to set him up with a friend to cure his loneliness. Hart walks in, visibly upset upon seeing the two talking. With his insecurities getting the best of him, Hart demands that Cohle never come to their home when he is not present and to never “mow his lawn” ever again. Shortly after, Maggie and Martin confront their daughter about the inappropriate pictures she drew at school and showed friends. Later, with the kids off to bed, the couple discuss their relationship issues again as Maggie shares her unhappiness about the distance between them and the amount of time he works. They end their disagreement with a night of passion and “making up.”

As Hart stands back and watches him in action, Cohle questions a young man, banking on the fact that he can likely get anything he wants out of him, bringing the questioned to tears offering a confession. Walking away, Cohle looks at Hart and confirms, it is not their man. Later, Cohle begins to review old case files in hopes of finding a related case that could off some clues, leaving, however, once he gets a call to join Maggie and Martin at a local bar where he is being set up with one of Maggie’s friends.

While at the bar taking a couple shots..Martin runs into Lisa who is on a date with a man. Hart seems to stew as he and his wife dance as he sees his former love, who has obviously moved on, having a good time with another man.

Later, he cannot take the agony of wondering what the two were up to and shows up at Lisa’s home and despite her refusal to open the door, Hart breaks in and pummels the half-naked man she was entertaining while threatening to have him arrested. Maggie, home alone, calls Cohle for some information and some comfort as she agonizes over her crumbling marriage.

Hart walks in, looking worse for the wear, as Cohle pulls his in and tells him he found another dead woman that is connected to the case. As they discuss their plan, Quesada walks in and questions why they have not let the case go as it is supposed to be with the task force. They get a little more time. In the car, Hart asks Cohle if he believes a man can love two women, obviously still feeling scorned about his mistress.

Hart gets information, while Cohle questions a church staff member about Reggie Ledoux that gives both detectives cause to follow this lead as they’ve been able to establish connections between Reggie and Lange. The 2012 Rust continues to offer his wry wisdom to his captivated audience of two as he describes the “locked room” held in our head as a dream. As he reflects on the monster at the end of the dream, the episode ends with a cut to an almost naked man walking with a machete, wearing a gas mask, presumably Reggie Ledeux, one of the many monsters in this addictive series.

Meet us here Feb 7th for the next installment – salacious details and all.