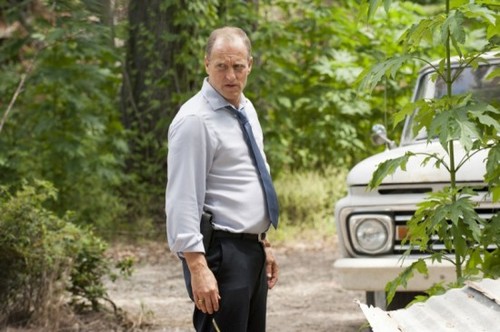 Tonight on HBO their new crime drama TRUE DETECTIVE airs a new episode called,”After You’ve Gone.”  On tonight’s episode Season 1 ends with Hart and Cohle finding a new lead in their 17-year-old case thanks to a detail that was overlooked.  Did you watch last week’s episode?  We did and we recapped it right here for you.

On last week’s episode Hart (Woody Harrelson) and Cohle (Matthew McConaughey) forged a truce to probe a murky string of disappearances that tie to the symbology of the Dora Lange murder and the Tuttle family.

On tonight’s show an overlooked detail provides Hart and Cohle with an important new lead in their 17-year-old case.

We will be live blogging True Detectives finale with all the up-to-the-minute details at 9PM EST so make sure to come back to this spot and watch the show with us.   Make sure to refresh often so you get the most current info!  While you wait for the episode you can catch a sneak peek of tonight’s episode BELOW!

Much anticipation has been building for the season finale of True Detective. There are many theories and variety of speculation about how the first season will end.

Season 1 ends with Hart and Cohle finding a new lead in their 17-year-old case thanks to a detail that was overlooked. The opening scene is a creepy one where we see Errol, with the scarred symbol we now have seen many times, talking nicely to “daddy” explaining that someone should give him a good hosing, but that if he’s good, he’ll bring him back some water. He walks off and we see his victim chained to the bed.

Late, he walks in to his lady cooking for him and suddenly develops a British accent. She upsets him and he shoes how quickly he turns violent. She asks him to make flowers for her and he says he does not have time. She feels sad she says because he hasn’t made her flowers in so long. He tells her to come sit on his lap and he begins to pleasure her and asks her to tell him about grandpa again.

Meanwhile, Cohle and Hart are still with Steve on the boat and they force him to watch the video that Cohle had in his possession. Hart waits outside. Steve tells more about what happened. He tries to blame Sheriff Childress telling the boys that when he brought the report to the Sheriff after noticing there was a change to his original, the Sheriff claimed to know the familt and tell him not to question the change. Cohle does not believe him. Cohle and Hart let him go, but not before giving him a stern warning, along with something they have over his head, that he is not to say anything about the little boat excursion.

Sick Errol is painting at the school and is watching the little girls play as he whistles his creepy tune. A little boy approaches him and stares at him. Cohle gives the word and his henchman starts shooting at Steve’s car as a little “extra warning” to him.

Back at Hart’s office, Hart seems like he is on to something and pulls up some 1995 files. Hart finds a small detail in a paint job that was overlooked previously. They compare pictures of the shack house with and without the new paint job and take off to investigate further. In the car, Hart opens up to Cohle about what Maggie told him after she and Cohle had sex. Hart says that Maggie was careful to say that Cohle should not have been blamed. Cohle tells Hart that Maggie came to see him to check on Hart to make sure he is not in any danger.

Cohle and Hart arrive at the shack from the pics and find the owner in 1995 is now in a senior home. They visit her to ask about whether or not her house was painted at the time. She says that it was and that some nice men from the church did the paint job. She notes that one of the men had scars on his face. The boys confirm this back at the office because the husband of the lady they met with claimed the paint job on his tax return. Form that, they track down the maintenance company who did the work.

Hart meets with Papania to try to to see if he can get any information and asks him whether or not he’ll do the right thing if he and Cohle call him when they finally solve the case. Papania asks why he only met with him and shares that he knows the two have been pulling files all over the state.

As Cohle tries to search for answers back at the home of Errol , he is caught be Errol and ends up stabbed as Errol demands he takes off his mask. Hart is close behind while Cohle and Errol struggle and Hart attempts to shoot Errol. Errol, in turn, throws an ax at him that brings him down. As Errol walks over to Hart, standing above him ready to go in for the kill, he is shot from behind by Cohle. Cohle is barely moving, but saves his former partner. Moments later, police and the detectives arrive at the scene as Hart yells hoping they’ll find them.

In the hospital, Hart is recalling all he can remember. Papania and Gilbough explain that Errol is dead and the women found dead in the home who we met in the first scene is actually Errol’s half-sister. Maggie and the girls come to visit Hart in the hospital. A news report tells that Errol was linked to dozens of missing persons they found at the scene. Cohle is shown in the hospital bloodies and out of it. A few days later, Hart visits Cohle in his room and the two are still at it and Hart rolls out on his wheelchair as they flip each other off.

As Hart is released, and Cohle is still wheelchair bound at the hospital, Hart tells his former partner he’s arranged for a place for him to stay after he is released. Cohle relays a strange feeling he had when he was taken out by Errol, where he says he felt his daughter there, that he could feel her waiting there for him. He explains that he felt her love. He is reduced to tears and Hart reminds him of the stories he used to tell him about the stars. Light versus dark, Cohle says, is the only story there is. Cohle gets Hart to pull him out of the wheelchair and walk him away from the hospital. Hart tells Cohle he seems “unkillable.” Cohle tells Hart of the light and dark story, that while once there was only dark, the light is now winning. And so the first season ends, but we are happy to see Cohle and Hart survived and the evil Errol is no longer.