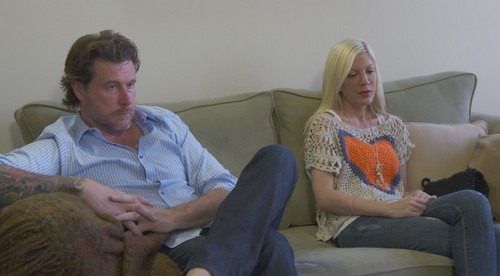 True Tori returns on Lifetime tonight with the final episode of season 1.  On  “Stay or Go”  the marriage of Tori Spelling and Dean McDermott is chronicled, as tabloids speculate about the couple’s future.

Last week, we were in store for another drama-filled episode of True Tori! Dean and Tori were seen in their bedroom where Dean was crying “I don’t deserve any of this, I don’t deserve this beautiful family.” Tori agreed that Dean doesn’t deserve it, but yet, he has it. Dean asked Tori what he needs to do, she told him, he needs to do it right for a change. Tori was sitting there, her heart was ripped out and she was begging Dean to do something. Dean was completely clueless on what he has to do to get Tori back.  Did you watch last week’s episode?  If you missed it we have  a full and detailed recap, right here for your enjoyment.

On tonight’s episode the drama continues when Tori and Dean try to put some normacy into their lives by having dinner with friends but the conversation quickly turns to how the couple is torn about whether Dean should host Chopped Canada again. Tori doesn’t want Dean to go because she feels that her family needs to heal and it will only be disrupting. Meanwhile, Dean doesn’t want to leave his family, but he is torn because he has obligations and a career to sustain. Will Dean return to Chopped and loose Tori for good?

We hope you stop by to watch the finale of season 1 with us! We loved Tori & Dean: In Love and are really excited to see how this season ends. Make sure to come back here later tonight at 10 PM EST for your LIVE recap. In the meantime hit up our comments section and tell us your thoughts on the about this new show.

Tonight’s episode begins with Tori’s friend at her house doing a photo shoot. Tori says she is waiting for some grand gesture from Dean to make up for what he’s done. She is hoping he will decide to stay home instead of going off to film Chopped Canada.

The photographer is also taking pictures of the kids and Dean is on hand as well. Liam refuses to take pictures with the family. He says everyone is making him feel stressed. Tori understands that he is going through a tough time but encourages him to be in the photos with the family. He finally comes around and they finish the family photo shoot.

Tori and Dean have Jess and her husband over for dinner. Tori explains that they have such momentum going that she doesn’t want Dean to go to Canada for two and a half months to film because she is worried it will take away from what they’ve built back up. Jess’ husband gets on Dean about continuing to push and push to get through to Liam because he needs him. Dean complains about how Liam is acting out, but it is obvious he is just scared. After Dean and Tori get the kids to bed, they lay down and hug one another in their room. Likely due to Liam not feeling too secure with everything going on with his family, he doesn’t want to be away from his parents and gets up, followed by his siblings, to go knock on mom and dad’s bedroom door.

On their 8th anniversary, Tori and Dean are going on their first date in months. At dinner, the couple talks about their past anniversaries. Dean reminds Tori about how he used to get her a ring every year, She tells him not to this year, mainly for financial reasons. Dean chokes up as he thanks Tori for giving him a chance. Tori brings up the Chopper Canada issue again, somewhat already knowing his response. He confirms her fears by telling her that he does have to go. He tries to reassure her by telling her he feels in love again and doesn’t want to lose that. He tells her he’ll do whatever it takes to make her happy and prove his love.

The next day, Dean is a master at making the kids laugh while playing tea party. Meanwhile, Tori, Jess, Courtney, and Kate are having lunch together and she is updating them about their relationship and the fact that Dean will have to go. When Kate brings up making Dean sign a contract not to cheat, the talk gets to tattoos to permanently document his love and Tori shares that Dean has her name tattooed very close to his package. Wow. Courtney shares that she is concerned that once the cameras are gone and she is left alone to deal with everything, she might break. Tori seems to agree and tears up at the thought of it.

Dean and Tori see their counselor. Tori seems optimistic in the session, but she is still nervous about his trip. Dean shares that he is happy about the show, and feels it is up to him to prove to Tori that he can be the husband she deserves. The doctor and Tori question what the kids will say when they find out he is leaving. The underlying problem is Tori is upset that she feels that she and the kids are not important enough to Dean to stay.

At home, Dean texts his manager to find out if he can quit Chopped Canada, but is told he cannot break his contract. Tori shares that she wishes he could feel the pain she is experiencing. She is not sure their relationship can survive him being gone.

The next morning, Tori comes downstairs. Dean is reading the paper and they greet one another. He tells her that he has been thinking…and he just can’t go. Tori has come around, however, and tells him he needs to go because he cannot give up his career. She tells him that they cannot let one huge mistake define them. Tori is relieved that Dean offered to stay because he felt he needed to be there for his family. They talk about communicating every day. Tori shares that as much as she doesn’t want him to go, there are too many reasons why he needs to go. It is really sad when Liam hugs Dean goodbye at the airport. He just doesn’t want to let go. Tori tries to keep it together as she says goodbye to Dean. She seems optimistic on the way home as the kids make her smile by begging her to all go home, get in her bed, and eat breakfast in bed. Everything seems to end on a positive note, but previews for next week show there will be one special night in LA when Tori and Dean reunite. Supposedly, questions will be answered, we’ll find out if they will remain together, if the affair was fake, etc. The promise is that all questions will be answered. We can’t wait to watch and s