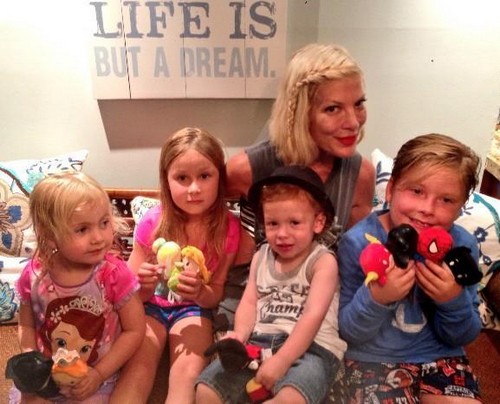 On the last episode, Tori decided to purge a massive warehouse of belongings in order to provide for her family amidst financial turmoil. Meanwhile, an unexpected discovery prompted Tori to reach out to her ex-husband, Charlie; and Tori and Dean wrestled with their relationship as they contemplate a life-altering medical decision. Did you watch the last episode? If you missed it, we have a full and detailed recap right here for you.

On tonight’s episode Tori Spelling pursues her past in an effort to control one aspect of her life; Dean McDermott battles his demons.

We hope you stop by for this cool show! We loved Tori & Dean and are really excited to see how season 2 of True Tori further explores Tori and Dean’s relationship. Make sure to come back here later tonight at 10 PM EST for your recap. In the meantime hit up our comments section and tell us your thoughts on the about this show!

After 8 years of marriage and starting a family with Dean, Tori thinks she still needs some form of closure from her ex-husband. The same man she left in order to be with Dean!

Currently, her marriage is still on the rocks.  And that’s even with Dean going to both joint and individual therapy to deal with his demons. However, lately, Tori has been kind of riding him about his sessions and whether or not they’ve been actually helping. She’s at the point in her life where she doesn’t want to hear that he’s still struggling with his “demons”. She just wants him okay and enough is enough. Tori doesn’t want to be the only one shouldering the financial burden anymore.

And when she’s not angry about that then she’s picking fights over the littlest things. Like the way he can swoop in and quickly cook the kids’ dinner. She says he doesn’t give her chance to work it on her own so him coming in to save the day so to speak makes her feel like she’s inferior in their relationship.

Although, to be fair, the argument while silly did stem from a bigger issue than baked potatoes. Tori says Dean has always criticized her in the kitchen. He thinks he’s helping when really his condescending way of talking her sometimes makes her feel guilty about not being overall better. A better wife and a better mother.

But then the producers of the show did something they don’t normal do. They asked her why she was more or less sticking around. And to put it simply – her kids. She’s already been married and divorced. So theoretically she knows that she can walk away from her marriage to Dean. Though this time is different because she has kids to think about and so they make her want this marriage to work.

Yet things aren’t looking too good for them. Tori feels like she has to hound Dean to attend therapy sessions and his AA meetings for his addictions. Then they attend a joint session and she finds out that he hasn’t been attending the meetings. Instead he’s been off doing something else while she merely believes he’s at the meetings.
Then Dean, now caught in a lie, says what he always says. He’s goes on a self-loathing monologue where he tears himself down so much – his wife feels guilty about wanting to berate him.

Afterwards, Dean asked Tori to go to an Al-Anon meetings. Al-Anon was created for families of alcoholics. Their meetings are supposed to help the family understand and support their family member. And so Dean feels it would help in his AA meetings if Tori were to go to Al-Anon.

As for Tori, she originally didn’t want to go. She only changed her mind after she felt like she was being pressured into it and that in the end if she didn’t go then Dean wouldn’t go to his meetings. It was as a result of that – she caved.

And, subsequently, Tori heard a few things Dean ended up wishing she hadn’t. She was warned that Dean might be using her meetings as an excuse for himself. He already knows the odds of relapsing so he has yet gotten to the point in his life where he truly wants to get better.
Instead of taking his sobriety seriously, he’s been essentially playing around when it comes to his treatment. And making Tori attend Al-Anon as a threat for him to go to his

AA meetings is just another example of him not taking his disease seriously. Tori was warned that Dean might have never hit rock bottom.

Dean was furious when he heard that. He said those people didn’t know him or his situation but he was slightly off base. He allegedly sent Tori there in order for her to hear from other people that have gone through supporting someone with addiction. And the whole point of being there was so she could gain some knowledge from people like her.

But the part Dean didn’t like is that Tori was then worried he would relapse. And he didn’t want her worrying herself into a frenzy like him messing up would be a forgone conclusion.

Tori doesn’t deal well with stress. She had arranged to meet her first husband and because of her nervousness she had physically made herself sick. Even creating flu like symptoms. Thus she had to reschedule their meeting. Yet when she did finally went to see Charlie – she walked away with a lot of regrets.

She regretted the way she ended her marriage and there was a part of her that remembered how safe Charlie used to make her feel. But Tori doesn’t regret not staying with him. She told Dean that if she had stayed married to Charlie then she wouldn’t have her babies.

Though Tori does now feel angrier at Dean. And he in turn had to pick up on the fact that without their kids – Tori would have regretted leaving Charlie!