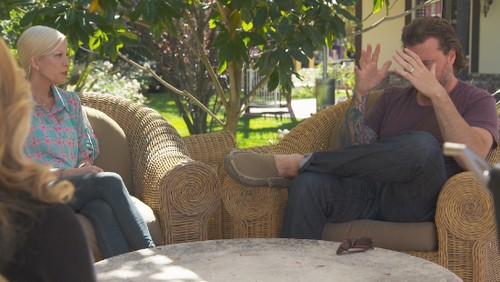 True Tori returns on Lifetime tonight, the episode is called “The Truth Comes Out” and in this episode, Tori Spelling continues to rely on her friends for support while she continues to deal with her husband, Dean McDermott’s cheating on her.

Growing up as part of Hollywood royalty, Tori had always lived her life in the public eye. The world watched as Tori and Dean fell in love and became parents to four beautiful children. But Tori’s fairytale life came crashing down when reports of Dean’s infidelity hit the tabloids last December, throwing their marriage and family into crisis.

Last week, Tori found out through her publicist that her husband cheated on her with a girl from Toronto. At first Dean denied the allegation, but once the information became public, he admitted it and enrolled himself into a treatment facility.  Did you watch last week’s episode?  If you missed it we have a full and detailed recap, right here for you.

On tonight’s episode the truth continues to come out and when Tori chats with her friend, Andy, about the revelation of Dean McDermott’s affair, this is what she has to say; “Because this affair is so public, I guess I just assume that everyone’s like, ‘Okay, we know what’s going on,’” she explains. “So to hear my friends day to day say, ‘You’re not dealing with stuff,’ it’s just shocking to hear that and it puts it all in perspective.”

We hope you stop by for this cool new show! We loved Tori & Dean: In Love and are really excited to see how this show further explores their relationship. Make sure to come back here later tonight at 10 PM EST for your LIVE recap. In the meantime hit up our comments section and tell us your thoughts on the about this new show!

This week is Tori and Dean’s son’s birthday and so Dean is getting special permission to come and visit. This is the first time that many of Tori’s friends will be seeing Dean since the whole affair came out in December. And Tori is worried about how her husband will be received.

Her friends are very opinionated and they’re pushing Tori to make a decision. Preferably the same decision they came to a couple of months ago, but Tori doesn’t feel like they understand. She has small kids and they need their father. Especially her oldest whose birthday they’ll soon be celebrating.

Liam has acted out since his father left to go to rehab. He and his dad were very close and Tori trying to fill in the gap isn’t helping. Sometimes Liam’s attitude gets so bad that Tori starts to wonder if her son blame her for his dad not being there.

But she’s not the only one he takes it out on. When they were leaving a store and some paparazzi spotted them – Liam tried to use a stick to beat them up. So there is a lot of aggression there.

Tori started to see a therapist for a one on one session. Usually she’s sees the couples’ therapist in order to work on her marriage. This time though she sees a therapist to work on herself. Tori feels like she lost pieces of herself throughout her marriage and she doesn’t want her daughters growing up to be like her or think that’s ok.

Tori has been worried about the impact of her marriage on her children. Whether it fails or not is still up in the cards, but what she is sure of is that she doesn’t want a repeat of what happened last year. When Dean’s affair came out it was all over her kids’ school.

And that made it hard for her hang it out with the other moms. She was only just starting to like them and feel like several of them could be honest friends when the news spilt. After it did she then kind of went underground.

Tori was refusing to go out to coffee for the longest because she was afraid to answer questions. But she recently changed her mind and decided to go.

It was good for Tori to go out with her school mom friends. They offer the support she needs and they also make her laugh. Tori was able to joke with them about the rumors and they made her situation with the sex tape seem funny.

Dean had asked his wife a few years ago to make a sex tape and she agreed. Only she didn’t know that he was still holding onto the tape after all this time. So when his “mistress” claimed she saw it – that hurt Tori more than anyone could ever know.

Tori wants to express her anger with him, but she’s afraid to. Dean had a nervous breakdown when his affair came out and Tori thinks he’s still too fragile to hear what she has to say. She also thinks he’s not ready emotionally or physically to truly return home. Though Dean is of a different opinion.

Dean knows that he was in a dark place. Neither the camera crew or the therapist knew that Dean was suicidal prior to this, but Dean swears everything has changed now. He says he’s stronger and he keeps asking to come back home.

However Tori had to take him away from the cameras to discuss his suicidal past. She wanted him to know that he didn’t have to reveal his past to the cameras. That it was ok if he didn’t want to talk about it. He said it ok though the production crew wanted to play it safe.

This was the first they heard about Dean’s mental condition and so they brought in an outside psychologist to determine if Dean was mentally equipped to handle filming. Until that happened then all production was halted.

When production did come back, it started right when Dean returned home. His kids were happy to see him. And Tori was glad for the assistance. But she still wasn’t up to sharing a room with Dean just yet.

The next day at Liam’s party – Dean was left feeling awkward around Tori’s friends. He didn’t know how they would react and so he was shy. Then when one of the guys didn’t approach him about his affair it was to tell him that he personally didn’t understand where Dean was coming from.

Still, Dean was able to keep talking to him till the two guys did agree on one thing. If Dean loves his wife and his family then he’s going to have to fight for it. Dean can’t expect Tori to get over what it did, but he has to make their relationship worth it.