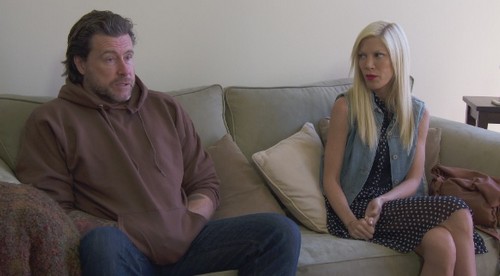 True Tori returns on Lifetime tonight with a special called “Confessions” Tori reflects on the most explosive moments from the season and reveals exclusive new footage shot behind closed doors.

Last week, in an intimate interview session hosted by Brooke Anderson, Tori and Dean faced each other for the first time since Dean left the family for work in Canada. They updated viewers on their road to reconciliation and answer the questions that had hounded them since news of the affair first broke.  Did you watch last week’s episode?  If you have a full and detailed recap, right here for you.

On tonight’s episode it will be interesting to see what more there is to confess. Tori previously stated that she will not ask Dean if there were multiple affairs on TV – so that we won’t see, but we will see Dean storm out of a therapy session that he was having with her. Tori, clearly hurt by his departure, proceeds to tell the therapist that her hubby wasn’t making any sense because at one point he blamed them not having sex the night before he went on his trip, for his having the affair. “We’ve never had sex the night before he’s left for a trip…Maybe he just f–ked up and f–ked somebody. Maybe the truth is that he’s been doing this all along and this is the one time he got caught. I don’t know,” said Tori.

We hope you stop by to watch the special with us! We loved Tori & Dean: In Love and are really excited to see if the couple stays together. Make sure to come back here later tonight at 10 PM EST for your LIVE recap. In the meantime hit up our comments section and tell us your thoughts on the about show.

Six months ago my fairytale marriage fell apart. She explains how she made the decision to document her family’s struggle as they go through the counseling and healing process. Tori says that tonight she will share some footage that has not yet been shared and expose some personal confessions tonight.

Tori shares that she has been seeing Dr. Wexler for ten years, and decided to see her again when their marriage was falling apart. The first scene they look back on is when Dean got upset in counseling, sharing that they no longer have sex before he leaves on a trip. When he storms out, Tori shares that they never usually do that so she is not sure why he was lying. She tells the doctor how she did things for Dean, sexually, that were new to her and things most couples with four children don’t do. She stops at “ladies don’t tell.”

The next scene they discuss is the night when Tori was scrapbooking and falls apart into tears after thinking of the memories as she talks with Stella about how she and Dean fell in love. The kids leave and Tori cries and the two open up about their feelings. Next, Tori narrates through the famous kitchen scene where they argue about Liam’s haircut and Dean feeling like he can’t go anywhere without Tori knowing about it. She tells him to stop yelling and to speak to her like a human in the clip.

Tori says that hearing Dean say he is not sure he wants to stay in the marriage because she is too controlling was the hardest thing about the whole thing. Tori then recounts another counseling session where she tells Dean how she trusted him in the beginning and how she kept herself down in the beginning to put him up and make him feel good about himself.

Tori then recalls the counseling session where Dean shares that he considered ending his life. In the session, Dean explains how he knows he deserves to get help. Shortly after, Tori remembers the night Dean coming home after getting out of rehab and how good she felt to see him. She then talks about her hurt while recalling the counseling session where she pulled the details of Dean’s night out. She asked for details like whether or not they “spooned” and cuddled. She shares that she was more worried about Dean and Emily having a connection through cuddling, more so than them having sex.

Tori shares that at this point she still didn’t really know how to communicate. She tells about the time Dr. Wexler told them to write letters to one another to share their feelings. She says how disappointed she was because Dean’s letter was all about his feelings rather than focusing on her and how she feels. Dr. Wexler points out how he seems to make things about himself as a way to relate to her. She says it is normal but this is where their disconnect is.
Tori talks about how she loves seeing her kids grow up but it is also very hard because she wishes they could be her babies forever. She says she could never regret being with Dean, because if it weren’t for him, she wouldn’t have her kids.

Later, Tori recalls that she didn’t know until seeing the footage that Wolf came over one night to talk with Dean to be a friend. She says it told her what great friends they have and how concerned they were. Tori then recalls telling her friends about Dean’s tattoo that he got in Canada. She talks about how she felt that the tattoo made her feel a little better thinking that another woman would not want to have sex with a man whose got his wife’s name tattooed right about his manhood.

Tori then talks about how horrible she felt about Dean going to Canada and how hard it was to have him leave again. She then recalls a counseling session where she shared her feelings about him leaving. She remembers how Dean said she is stronger than 10 men and thought she’d handle his absence well. She says she still gets mad seeing that footage again because she says that just because Dean thinks she is so strong, shouldn’t be the green light for him to put her through more. They then show some unseen footage of the two talking by the fire and Dean sharing that he sees the error of his ways after Tori tells him what she needs in a partner. Seeing the footage, she shares that that is the first time she felt like he finally heard her.

Tori then talks about the day she came home after being in the hospital for 9 days. They share the footage of her homecoming. Tori says that Dean is a very good dad and she doesn’t always give him credit for that. Just then, they show footage of Dean interacting with the kids. They do seem much more close to him than to her. Tori then explains how terrified she was still feeling about Canada because there is so much work to do between them. She says she feels Dean is naïve about feeling so confident about their relationship shortly after they started to get back on track.

Footage of the counseling session where Dean tells Dr. Wexler he is going to Canada is shown. The doctor calls him on it in the previously unseen footage when she tells him that a marriage cannot possibly be repaired in three weeks.

Tori then talks about how she had the desire to get a tattoo with her children’s initials with an arrow. The arrow represents pulling back, aiming, and moving forward. She shares that she is hopeful looking forward. She talks about how important anniversaries are to her and they show unseen footage of the couple on their anniversary dinner date where Tori is actually worried about eating because she doesn’t want to get food stuck in her teeth! This man has seen her give birth to four kids and she is worried about him seeing parsley in her teeth? They probably should have left that footage as “unseen.”

Tori again says how hard it was when Dean was preparing to go back to Canada. She says that in looking back at the footage, how sad it was to see Liam’s face because he looked so sad. She recalls that she thought she would have had more clarity at the time, but did not.

Tori says that in seeing all the footage, she sees something in him. He has gone through this journey with her. She has much more confidence now. She says that Dean stuck in there with her because he loves her and helped her go through the healing process the way she needed to. She ends the episode by saying that she won’t let the past define her or them even though she doesn’t know what the future holds for them.