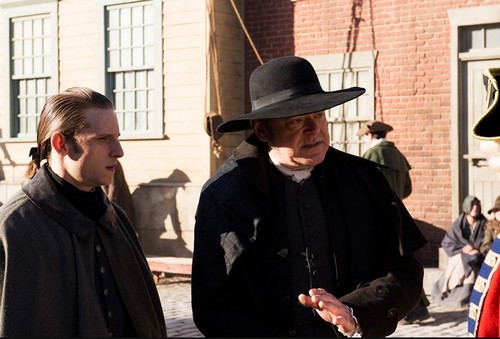 AMC’s brand new series Turn returns tonight, this episode is called “Of Cabbage and Kings” and on it Ben is betrayed by his own militia while on the run from the British. Meanwhile, Abe and Richard travel to New York to spy, and Mary confronts Anna.

If you have never watched the show before it is based on Alexander Rose’s book Washington’s Spies, AMC’s TURN tells the untold story of America’s first spy ring. A historical thriller set during the Revolutionary War, TURN centers on Abe Woodhull (Jamie Bell), a farmer living in British-occupied Long Island who bands together with his childhood friends to form the Culper Ring — an unlikely team of secret agents who not only went on to help George Washington turn the tide of the war but also gave birth to modern spycraft.

Last week, the murder of a royal officer has Abe seeking the killer’s identity before Anna is framed for the crime. Meanwhile, Ben and Caleb brutally interrogate Simcoe.

If the last week’s episode was any indication, then tonight’s episode of TURN is one that you won’t want to miss and we’ll be recapping it live right here. While you’re waiting for our updates you can hit up the comments and let us know what you think of TURN so far, don’t forget to check out the preview below!

Tonight’s episode begins in Northern New Jersey where Simcoe is being transported via wagon. As Ben and Caleb lead the way, they begin to hear something in the distance. When they stop to look around, they see wounded members of the Continental Army walking by them. They share the news that there are several others who have been killed or have been taken prisoner. Simcoe overhears this, stands up, and with a smile shouts, “By all means, let’s head to New York!”

Abe is saying goodbye to Mary and Thomas. Mary states that she feels jealous that Abe is going to New York. Meanwhile, General Scott, Ben and Caleb stop at a farmhouse and request to stay for the night. Tallmudge agrees to scout the area after a stern discussion with General Scott where he is told that he faces disciplinary charges unless he can find a way to make sure he behaves well on this trip. In response Tallmudge then boldly orders Caleb to get to Abe.

Stopped at a checkpoint at Oyster Bay, Richard and Abe have a discussion while on their way to New York. They are questions about their trip and are told to wait. Richard suggests stopping at Abe’s alma mater. When Abe seems to recoil at the idea, Richard brings up the thought of paving the way for his son Thomas. He shares that he wishes he took more interest in Abe when he was younger.

Caleb prepares to leave when the militia question him. They believe he is not coming back. That gives them the idea that they should do something about this and want to take matters into their own hands. Later, Caleb is met by someone at the shore who helps him pulls in his boat.

In the dark night, Anna notices something is wrong with her clothesline and heads into the dark barn where she discovers Caleb hiding in the straw. He pops out from hiding, laughing and loud and scares Anna. She offers to help him get information from the drunken soldiers who frequent the tavern. After she shares her interest in helping the Culper Ring, Caleb tells her this is man’s work and dismisses her offer and she gets upset. She yells at him to get out. He obliges and leaves.

Meanwhile, in New York, Richard and Abe have a business meeting with the same officer they spoke to on the street earlier. As Richard and the officer begin to negotiate, it doesn’t seem they’ll reach a compromise. Abe steps in and negotiates a better deal between the two and everyone seems happy. When the officer begins to go off topic, Richard steps in and shares that they should end the meeting and stop talking business.

Simcoe, Tallmudge, and Scott are eating dinner at the farmhouse when Simcoe is scolded for being antagonistic. Just then, they are told militia is outside. As Tallmudge and Scott go outside, they militia pull their guns on them. When Scott claims that this is a mutiny, Caleb replies that “This is New Jersey.” After a small gun battle, Scott is wounded. Simcoe boldly offers to take over as the leader of the militia, but the response to his offer was a hit with a gun which knocked him to the floor.

Mary is trying to clean the stain of the boarder’s shirt and talks to him about Abraham.

Back in the barn, Anna and Caleb are talking and Caleb is much calmer. Anna agrees to help him since he asked so nicely. Caleb wants her to go to the wharf to look for unattended boats.

Back at the farmhouse, the farmer’s wife is upset upon hearing her husband may die if he doesn’t get help soon. The entire situation is tense when Ben begins a speech in which he hopes to convince the militia members who have turned their loyalty to remember their oaths, and stand against the British and King. It doesn’t go as planned and they respond by giving an ultimatum to the people inside that they surrender to them.

Richard and Abe have a blow-up after Abe feels his father is questioning his manliness and his abilities as a father and husband. Very upset, Abe storms out and head’s over to his alma mater. Once there, a Redcoat confronts him and tells him to get home. Abe seems dazed and in another world as he looks down and walks off to a nearby fire where a couple of other Redcoats are, and shares that he is a cabbage farmer. They give him some food and Abe shares that he has a lot of cabbage to sell. They discuss how Abe can get it to them when Abe inquires about where he can deliver the goods. From this, he obtains information about their military positions before he walks off into the night.

At the tavern, Mary confronts Anna. Anna is surprised to see her and asks her why she is out so late. Mary replies that she came to see her. Mary offers to let Anna continue to see Abraham but Anna responds that she is not having an affair with him and hasn’t had feelings since the engagement was broken because of his father. Mary was surprised to learn about this and Anna tells her to ask Abraham about it…or better yet, “ask his father.”

The militia threatens to enter into farmhouse unless those inside give up and come out. Ben and Scott come out while begging them not to shoot. Ben pulls out his gun and shoots one of the militia in the head. Simcoe shouts “Well done, Captain! Well done!” Meanwhile, Abraham arrives at Anna’s house with good news. He shares the information he obtained from the Redcoats with Caleb and Anna. They are very happy and Caleb assures Abraham, that he trusts him. Anna tells Abraham that Simcoe is dead. Caleb, about to tell the truth, is stopped by Anna.

Meanwhile, at the farmhouse, Scott orders Tallmudge to shoot one of the militia. He is visibly bothered knowing he had told the man he’d be safe. Scott tells him that he will face a court martial if he disobeys him. Ben replies,“I’ll take the court martial.” Scott takes matters into his own hands and shoots and kills the man himself.

Caleb comes out from hiding, pointing a gun at each of the oarsmen in the boat demanding they row to get away from the Redcoats who are shooting at them. He avoids being shot as they continue on.

Tune in next week for another action-packed episode!