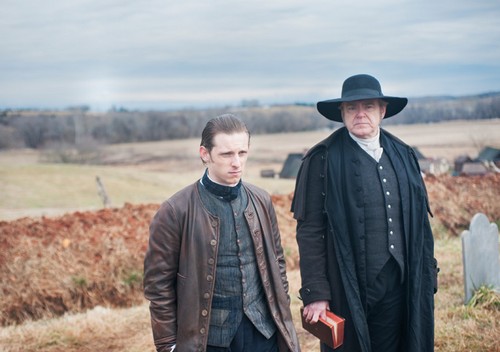 AMC’s brand new series Turn returns tonight, this episode is called “Eternity How Long” and on it Abe and Richard struggle with British orders to dig up local gravestones. Meanwhile, Ben and Caleb conspire to get their intelligence to Gen. Washington.

Last week’s episode Ben was betrayed by his own militia while on the run from the British. Meanwhile, Abe and Richard traveled to New York to spy, and Mary confronted Anna.  Did you watch last week’s episode?  If you missed it we have a full and detailed recap, right here for you.

On tonight’s episode Abe and Richard have some problems when they are ordered by the British to dig up local gravestones. Ben and Caleb conspire to get their intelligence to gen. Washington

Tonight’s Turn Season 1 episode 4 is going to be another great episode, and you won’t want to miss it. So be sure to tune in for our live coverage of Turn — tonight at 9PM EST! While you wait for our recap, hit the comments and let us know how excited you are about this new series, Turn.  Check out a sneak peek of tonight’s episode below!

RECAP: Abe is standing in front of his brothers graves; he remember being with Thomas when their mother died and that he helped him get past it. Major Hewlett tells of his men and that their defenses are pathetic; he tells them how he wants things done. Hewlett then goes ahead wanting to use the grave yard as a quarry; Richard says it’s not morally right to do such a thing. Richard mentions his wife and son are buried in this grave, Hewlett tells him that they have no choice; Richard said that he can’t allow this to happen. Hewlett sees Appleton with his survey of how many stones they can use; Hewlett then says that they can’t use no more than ten. Richard offers to go ahead and help choosing names of people who won’t protest much to secure the cannons; Hewlett says Richard has three days.

Abraham says that he is trying to save Richard and if he signs the list than he will have the town turn on him, Abraham says it’s an act of evil for anyone to remove a grave stone; Richard tells Abraham to start being a loyal son for starters to help him. Richard plans to keep it all a secret so the town won’t hear a single thing.

Simcoe plans with a woman to catch a general by her acting as a wench to surprise him, the woman blind folds the man and has him chase her around the room; he calls Marco and she says polo as he chases her. The general says Marco and Simcoe answers polo; the man removes his blindfold and sees Simcoe in front of him.

Abraham is rubbing his child’s face and starts to kiss Anna after; Anna and Abraham get on the bed and Anna says she can be all that he wants. Abraham says if he tell Anna what troubles him then she will have to promise to be quiet. Anna is sewing with a bunch of women the next day, they are all starting to gossip; when Anna accidentally lets it slip something about the mayor not always having the town to love him. Anna then completely spills it all to them. Simcoe tells the capture man that he is a deserter; Simcoe then says he wants to hang him right here. The woman is begging for help as she is taken away from the room; Simcoe then tells the general that he is in the position to stop what he’s planning to do to the woman. The general spills how he provided the location of a safe house; Simcoe knows he sold them out and isn’t happy to lied to about him not knowing anything. Simcoe guesses that the general met with John Andre.

Abraham looks outside and sees a bunch of the townsfolk out late, Anna says that they are on to his fathers plan; Anna says she let it slip and that she is sorry. The towns folk all walk over to Richards house, Richard comes out telling his guards to wait; he mentions having invited the people and that it’s fine. The people ask about how he is planning to pull out the grave stones, Hewlett tells one of his men to slip out the back. Richard says the stones of the founders, women and the people who protected the crown; Abraham comes over saying that they don’t know anything. Richard says no stones will be taken without consent; he hopes that the heads of the families can rise to the occasion. Richard pulls out the list and believes he’s made his tasks impossible now.

Richard is asking people in the town to give a grave stone to him, but they are all not trying reasoning with his requests. Abraham sees a man come over asking to see Richard his father; the man claims judgement will come if Richard tries to take their stones. Abraham says that his father is reasonable, the man claims Richard is the devil and starts getting very hostile with his words threatening him of possible murder or robbery. Abraham knocks the mans hat off and pulls out a knife; threatening to kill him if he ever insults his father Richard again. The man says that Abraham is damned just as much as Richard and has become a problem.

Hewlett is sitting inside eating and asks Richard to sit with him and enjoy a nice meal; Hewlett says that Richard shouldn’t be surprised the towns people are childish. Richard says that the people think this is a sin against God to pull out of stones, Hewlett says that he does as his king wants; Richard asks for more time and Hewlett says if he doesn’t have a list of names than Appleton will choose the best ones.

Abraham is sitting at a table in the middle of the night alone, he goes and takes his jacket; deciding to go out. Anna catches him and asks where he is going, Abraham says he’s going to see his father and needs to tell him something that can stop this all; Abraham says it’s something he should have said three days ago. We now see Simcoe once again forcing more information out of the general, he starts reading a letter of the general saying he is a more fitting commander than Washington. Simcoe offers the general a drink and believes he can be the next commander in chief.

Abraham arrives at his fathers house and goes to sit with him; Richard asks if Abraham believes hell exists in other places. Richard says there is no answers to his question, Abraham says there is always an answer and tells his father that if Major Hewlett was convinced there was no threat he’d change his mind. Richard is angry at Hewlett and thinks it’s completely wrong what he wants to do and that he’s acting like a king; Abraham says he is compelled to do something unjust and you either submit or rebel. Abraham says that they should rebel against Hewlett and his soldier since there are more people; Richard doesn’t want to lead a revolt. Abraham says it’s show that he is with the people; Richard realizes what Abraham is saying and they shake hands.  Abraham helps is father to lay down on the couch. Now day light, the soldiers are taking shovel to dig up the grave stones; a big crowd of people gather near the grave and they have weapons. Abraham joins the crowd and Richard turns around to the crowd; Richard says he has no stones to give Hewlett. Richard believes they failed to see what is most important and that they should do as God wants; Richard goes and takes a shovel. He starts to dig up his own sons grave, the people then follow taking shovels to join in; seeing how he is willing to sacrifices his own sons grave stone.