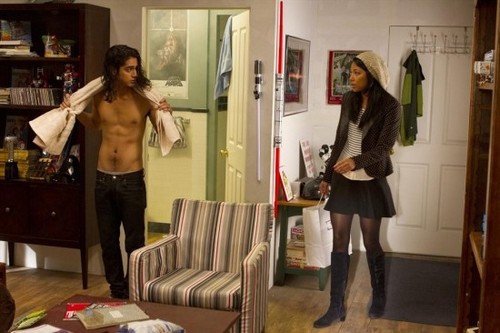 Tonight on ABC Family TWISTED returns after its winter hiatus with a new episode called, “Dead Men Tell Big Tales.”  On tonight’s show Startling truths are revealed and new secrets are shared.  Did you watch the last episode? If you want to get caught up, we did and we recapped it here for you.

On last the summer finale a confrontation between Danny and Archie at a soccer team party revealed treachery lurking among the in-crowd. Lacey had to make a choice to keep her popular friends, at Danny’s expense, or speak out for what she thought is right. Tyler continued to pursue Jo and Jo made a decision she might regret. Lacey also discovered that Phoebe might hold the key to unlocking new clues about Regina’s mysterious past. Meanwhile, Kyle’s suspicions rose when private investigator Marilyn (guest star Stacy Haiduk) unearthed shocking new evidence to refute Karen’s confession. And Tess realized it’s time to call on the help of an old friend. Joe Lazarov directed the episode written by Debra J. Fisher.

On tonight’s episode Jo is still struggling with her conflicted feelings about Danny when he turns to her for help while hiding out from the police. Danny overhears some surprising information about his father, which leads him on a quest to find out if his father is indeed alive. Lacey brings some information to Kyle regarding Regina, which she doesn’t realize points to a surprising new suspect in Regina’s murder. And Danny shocks Jo and Lacey when he finally reveals the details of what happened with his Aunt Tara all those years ago.  Meanwhile, Karen turns to an old friend (recurring guest star Ivan Sergei) for help in locating her presumed dead husband, not realizing Tess may hold the key to his whereabouts. And while searching for Danny, Lacey encounters new Green Grove resident Charlie (recurring guest star Jack Falahee), who quickly ingratiates himself into her life.

Jo is falling apart over her decision to sleep with Tyler and she’s blaming Danny and Lacey for her stupid mistake. It’s alright for her to be angry with in the beginning because they were secretly seeing each other behind her back but she never had a claim on Danny. All of three of them were supposed to be friends and even though two of them renegade on the deal; they hadn’t expected Jo would abandon them.

It’s as if she doesn’t care that Danny is on the run. Jo returned home around the same time Lacey showed up at her house. She wanted to tell Jo about a new piece of information she found on Regina but Jo doesn’t want to hear it. She tells Lacey that she’s done with helping Danny. He ran and if he did that then he must be guilty.

A few moments later, Joe is up in her room by herself when Danny sneaks in through her window. He told her how he overheard his mom and her daughter talking. He knows his father is alive and he wants Jo’s help finding him. He never expected he wouldn’t want anything to do with him. She had immediately called for her mom forcing Danny to escape before Tess could arrive.

Lacey on the other hand is actively looking for Danny when she runs into the new kid. His name is Charlie and at first glance she thought he was Danny. No, just an average kid that very soon appears to be drawn to Lacey. Is it a crush or something more? He does keep popping up on Lacey.

Lacey eventually finds Danny and surprisingly Rico was the one to help her. He took Danny in and was hiding him in the apartment above his garage. It seems he’s no longer at Danny and actually believes him when he said he was being framed for Regina’s death.

Meanwhile, everyone is searching for Danny’s father. Vikram didn’t disappear on his own. He got help from not only Tess, the police chief’s wife, but also from the private investigator that “found” the murder weapon with Danny’s fingerprints. The detective, Marilyn, also happens to drive the same car Lacey had described to Kyle. Lacey told him that Regina was fighting with the person inside of the car and had gotten scratched.

Kyle suspects Vikram of setting up Danny and he has his most trusted officer working with him behind the scenes. Over the course of their investigation though more signs began to point to Vikram. Vikram had an offshore account that paid enormous amount of money each month to Regina. And from the same account, someone paid a lump sum to Marilyn. Sort of like a special fee for services rendered.

Pretty convenient seeing as she used to work for Vikram. That’s also why Danny believes Marilyn is the best way to reach his father.

Jo caught on to Rico hiding Danny. She had run into a jumpy Lacy a while back and Rico who is usually OCD about his routine suddenly decided to change it. She went over to the apartment expecting to tell Danny to turn himself in when he dropped a bomb on her. She didn’t understand why he was desperate to see his father and so he explained to her that he think his father is setting him up. Why would he think such a thing? Well, because it wouldn’t be the first time. Danny never killed his aunt – his father did.

Then Vikram told his young son that he couldn’t go to jail and if Danny took the blame then he wouldn’t get in as much trouble. He told Danny that he would be taken away for a couple of days tops. Yet, as Danny began to serve a five year long sentence his father slowly stopped visiting. Until one day he was assumed dead at sea.

Danny agreed to take the blame for his Aunt Tara because his father was filling his head. He told Danny that he had to take the blame. For their family and even for Jo. Danny never understood that last part but he knows that he won’t go down again for his father’s crimes.

Tess keeps calling Vikram trying to get in touch. She told him he should return home and he’s ignoring her. He prefers to keep hiding. Karen on the other hand wants to make sure he gets found. She went to one of their old friends (who she knows intimately) and asked for his help finding Vikram. They can’t find him but Marilyn somehow can.

Jo finally chose to help her friends and to do that she went to Marilyn proposing a deal. She told Marilyn that Danny is willing to turn himself in and he’ll only do that if he gets to see his father first. Marilyn tries to deny any connection but when push came to shove it was Vikram that arrived to meet Danny instead of the police.

Danny wanted to get his father to back off and Jo felt he shouldn’t have to do it alone. She arrived prior to Vikram. Danny warned her to go and she wouldn’t. So she ended up seeing a very alive Vikram, but not like the man she used to know. This Vikram is scary and evidently without remorse towards his only child. He told Danny that no one could know he was alive. He claimed people were after him. Danny didn’t believe him and that got his father angry.

What pushed Vikram over the edge was Jo. She was making a call during the guys’ argument and when Vikram saw what he was doing he tried to attack. Danny was able to buy her time. He attacked his father giving Jo the chance the run. Although she didn’t get that far. She was running through the woods when she had to abruptly stop. Jo had run all the way to tip of the cliff.

Vikram knocked out Danny and found Jo there trapped. He demanded her phone and then tried to fight it off of her when she wouldn’t hand it over. Danny was able to intervene before Vikram got the chance to hurt her. They began fighting and he fell. Danny grabbed the first thing he could which was a branch and swung at his father. It was only supposed to stop him from attacking. He hadn’t expected his father would lose his balance and fall off the cliff. Danny did after all try to grab his dad in time.

Now Vikram is dead and Danny is officially a killer. It probably wouldn’t have been so bad if there wasn’t a second witness hiding in the shadows. Danny and Jo know what the story was but what will this witness say?