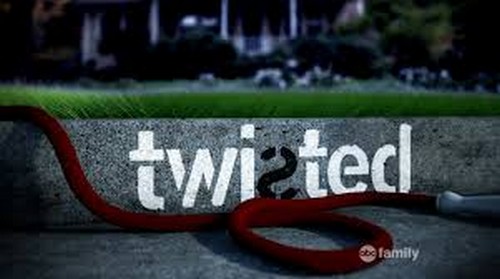 Tonight on ABC Family TWISTED returns after its winter hiatus with a new episode called, “Sins of the Father.”  On tonight’s show Danny and Karen both find it difficult to leave their past transgressions behind.  Did you watch the last episode? If you want to get caught up, we did and we recapped it here for you.

On last week’s episode Jo was still struggling with her conflicted feelings about Danny when he turned to her for help while hiding out from the police. Danny overhead some surprising information about his father, which led him on a quest to find out if his father is indeed alive. Lacey brought some information to Kyle regarding Regina, which she doesn’t realize pointed to a surprising new suspect in Regina’s murder. And Danny shocked Jo and Lacey when he finally revealed the details of what happened with his Aunt Tara all those years ago.  Meanwhile, Karen turened to an old friend (recurring guest star Ivan Sergei) for help in locating her presumed dead husband, not realizing Tess may hold the key to his whereabouts. And while searching for Danny, Lacey encountered new Green Grove resident Charlie (recurring guest star Jack Falahee), who quickly ingratiates himself into her life.

On tonight’s episode Danny struggles to come to terms with the latest development in the search for his father. While he is determined to come clean, he wonders if he truly deserves the chance to start his life over. Lacey becomes convinced of a connection between Gloria Crane (guest star Jessica Tuck) and Vikram, while Charlie (recurring guest star Jack Falahee) becomes increasingly interested in Lacey’s actions. Meanwhile, tension builds between Karen and her old friend Jack (guest star Ivan Sergei), and Karen questions the wisdom of letting the past back into her life. The hunt for Regina’s murderer uncovers an unsettling connection to Mayor Rollins (guest star Christopher Cousins). The episode was written by Executive Producer Adam Milch and directed by Executive Producer Gavin Polone.

Twisted Season 1 Episode 13 “Sins of the Father” picks up where we left off last week. Jo and Danny are standing at the top of the cliff looking down at his father’s body, they both appear to be in shock.

Jo wants to go get help from her Dad, but Danny doesn’t want them to. He thinks the police are still hunting for him for Regina’s murder. Danny announces he is going to leave Green Grove for good. Jo warns Danny that she can’t “keep this secret from her parents.” Jo tells Danny she is going to “give him a head start.” She plans to go home and pack him a bag of food and supplies, and then bring it to him in the woods, she makes him promise that he will wait until morning before he leaves town.

Rico and Lacey are sitting in the diner, Lacey is freaking out because she wants to know where Danny disappeared to. She is determined to clear him from Regina’s murder, and she thinks Regina’s Mom Gloria knows something that may help her. She found pictures of Gloria and Vikram together before he died.

At the police station Jo’s Dad, Kyle, declares that “finding Marilyn Rossi is their top priority.” Kyle tells Danny’s Mom and Jack that Marilyn set Danny up and his fingerprints were not on the murder weapon. Jack turns a box of Vikram’s old files over to Kyle, maybe it will help them determine if Vikram is really dead (Kyle has a hunch he is still alive).

Rico pays Jo a visit at her house. Rico asks Jo if she knows where Danny is, but Jo denies having seen him. Rico is really worried about Danny, and feels bad about kicking him out of his house.

The next morning Jo takes Danny the bag of supplies she promised him. Danny surprises her and tells her that he has changed his mind, and he isn’t running. He wants to go tell Jo’s Dad everything that happened with Vikram and his Aunt Tara, as her Dad, not as a Green Grove police officer.

Jack pays Danny’s Mom a visit to see how she is doing. She confesses that she didn’t sleep all night, she feels guilty that she “over looked Vikram’s flaws for so many years.” Jack points out that Vikram never appreciated her, but he did. He tries to kiss her, but she turns away and asks him to go.

At the police station Kyle is going through the box of Vikram’s belongings that Jack gave him the night before. He finds a computer disc and pops it into his computer. On the disc Kyle finds out that the Mayor owned part of Vikram’s company, and he must have lied when he recommended hiring Marilyn Rossi.

Lacey is at the horse races snooping around Regina’s Mom Gloria. She runs into Charlie, and he offers to help her get Gloria to “open up.” Lacey declines his offer and tells him to “keep it moving.”

Jo and Danny arrive at Jo’s house, and learn that Danny is no longer a suspect in Regina’s murder. Their Mom’s call Kyle, and Kyle tells them that Danny should “keep a low profile.” Danny’s Mom insists that he comes home, but he wants to talk to Kyle first. She rushes him out the door.

Kyle pays the Mayor John a visit, and accuses him of “lying to him.” Kyle reveals that he knows that Vikram and the mayor were business partners. The mayor confesses that a silent partner at Marna Inc. (Vikram’s company) encouraged him to hire Marilyn Rossi. Vikram and Mayor John’ silent partner was Regina Crane’s Mom, Gloria.

Kyle takes Gloria aside and begins questioning her. Gloria reveals that Regina found out Vikram was alive and that her Mom and Vikram were having an affair. Vikram was paying her not to tell Danny the truth. Vikram told Gloria that he saw Danny kill Regina, so Marilyn and Gloria planted Regina’s necklace in Danny’s locker so that the police oculd catch him.

Kyle has Gloria call Marilyn and tell her to meet her at the horse stable. Marilyn arrives after dark, looking for Gloria. Kyle arrests her, and accuses her of killing Regina Crane. He knows Vikram paid Marilyn $100,000.00, and that money was for her to kill Regina and set up Danny.

Lacey arrives at Jo’s house to see Danny, but Danny is gone. They rush into the living room when the news comes on, and they learn that Marilyn has been arrested for murdering Regina crane. Jo tries to call Danny and tell him the good news, but Danny doesn’t answer.

Jo sneaks over to Danny’s house after the fiasco at the police station. She wants Danny not to tell the truth about his Dad Vikram, and killing him. Since the police cleared his name as Regina’s killer, he has a second chance, she doesn’t want him to throw it away by confessing to another murder. Danny reluctantly agrees.

Jo runs into Lacey outside the diner, and Lacey is ecstatic that Danny is no longer a suspect for the murder. Jo gives Lacey her blessing, and tells Lacey that she should be with Danny, and she is okay with it.