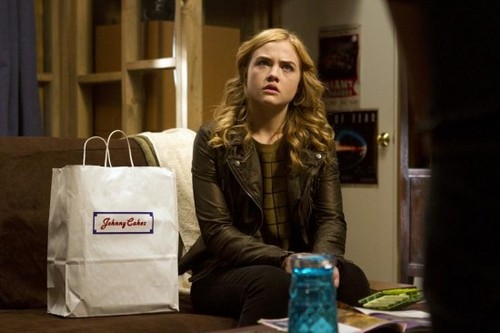 ABC Family’s popular new show TWISTED returns tonight for another great episode called “You’re A Good Man Charlie McBride”. As Jo gets closer to Charlie and learns more about his and Danny’s time in juvenile hall, Danny’s concern mounts. Karen gives Danny some powerful advice on turning his life around.

Meanwhile, Whitney’s wild side starts to rub off on Lacey, leaving Lacey uncertain about their complicated new friendship. Karen helps Tess with a personal matter and Kyle turns his suspicions on Jack. The episode, titled “You’re a Good Man, Charlie McBride,” was written by Executive Producer Adam Milch and directed by Daisy von Scherler Mayer.

Jo bonded with Charlie and realized that she need to move on with her life without Danny. Jo surprised everyone, including herself, when she decided to run for student body president, which complicated things with Rico, whose girlfriend Andie is also vying for the job. Danny is still haunted by Vikram, and Lacey, knowing something is up, confronted him about what he’s hiding. Jack’s daughter, Whitney, who has returned to Green Grove after being kicked out of boarding school, encountered Karen and struck up a quick friendship with Lacey

The episode starts off with Danny approaching Charlie about Danny wanting to kill his dad and whether or not Charlie told Jo about it. The episode then continues the next morning where Karen was asleep with Jack. When they go downstairs, Whitney is eating with Danny and they see that their parents have hooked up with one another. Karen then finds out that her son Danny has broken up with his girlfriend Lacy who is friends with Whitney. Danny told his mom that the reason why he and Lacy broke up is because he told her about how he killed his father in self-defence.

Lacy accused him of being exactly like his dad. Meanwhile at school, Jo is talking to Lacy about her and Danny breaking up. Whitney then comes up to Lacy and asks her if she is ok. Meanwhile Annie is talking with Rico about her being elected high school president. Rico asks her out on a date and she says yes. Danny is talking to his teacher and asks him if he can change his grade to and F because he earned it dishonestly. Jo was then talking to Charlie who was talking to her about Danny finding him last night.

The episode picks back up with Tess and Kyle looking for people on an adoption website. After Tess leaves, the police comes in to inform Kyle about Jack being at Karen’s house all night. Jo and Danny are talking about what Danny said to Charlie. She then asks him if he was using her that night for the money. He says no, but she doesn’t believe him. Whitney then comes up to Lacy and tells her to come clubbing in the city with her tonight. She tells Lacy to lie to her mom and try to come and get over her break-up with Danny. Kyle comes to see Jack at his boat shop while Whitney is there. While Jack is doing something, Kyle grabs one his water bottles.

He then tells a cop he is working with that he wants to test it to see if the DNA matches the DNA in the hair at the crime scene. Meanwhile, Karen walks into a restaurant and sees Tess. She is not very happy and tries to walk away, but she eventually does sit and talk with Tess. Tess says she and Vikram did not have an affair. She said that she had another baby and Vikram helped her give the baby up for adoption. Meanwhile Danny approaches Jo and tells her that it was not pre-meditated and he did not kill his father on purpose. Charlie then shows up Jo and Danny end up telling Charlie the whole truth. Karen and Jess are in Vikram’s room where they are going to find the adoption papers.

The episode continues with Charlie and Jo on a date. They talk about how they feel about what they know with Danny’s dad. Rico and his girlfriend see Charlie and Jo and go over to say hi. Meanwhile before Whitney and Lacy go out to the club, Danny comes over to talk to her about Charlie. He says that he does not trust him; she thinks that he is jealous because Charlie is with Jo. Danny then goes to do a little research on Charlie and finds that he works and lives at the horse stables. When Danny is up in Charlie’s room, he finds the picture that he has been looking for. He has a flashback of him and Charlie in juvy together where he couldn’t find his favorite picture. It turns out that Charlie had the picture that whole time which Danny found rather odd and confusing. Karen and Tess go through Vikram’s stuff to find the adoption papers. Karen does not seem t understand why Vikram would fake his own death. They then find the adoption papers which excites Tess.

The episode continues with Lacy and Whitney at a club. Whitney waves at a man and starts flirting with him so he would buy them a drink. Back at the dating scene, Rico and his girlfriend are talking, but she is distracted from all of the texts she is getting because of her new president position. Jo goes over to Rico when the girlfriend leaves to make a call; Rico says that he is worried that she might be up to something that would break his heart. Charlie then gets a pic from Danny showing him a picture of him and the picture that he found in Charlie’s room.

The episode returns with Lacy being hit on by the man who was buying them drinks. He offers to take her to a hotel; but, Whitney and Lacy escape. However, Whitney stole his phone, called his wife and put him on blast about trying to sleep with Lacy. Meanwhile Charlie and Jo are back at their date, but Charlie has to do something so he takes her home. Jess and Kyle find out that her adopted child is in Franklin Lakes, New Jersey.

Kyle then gets a call from the policeman that leaves us hanging for the answer. Karen then shows up at Jacks and gets into an argument with him about going to see Vikram. She is angry because he hid it from her. He says that Vikram was cheating on her and he was the one who found out about it. Karen then accuses Jack of killing Vikram and moving the body. He tells her to get out. Rico and his girlfriend are back at his house. He asks her if she is going to break up with him because she seems to be avoiding him. She says no, she was just nervous about the date because she was a virgin and had never done that before. He then admits to her that it is ok because he is a virgin too.

Charlie and Danny then approach each other. Danny wants to know the real reason why Charlie is here. Charlie tells Danny to leave him and Jo alone or he will tell the police what really happened. Whitney and Lacy are then walking after leaving the club. They are bonding about both having divorced parents. Whitney then kisses Lacy out of the blue. Right after, however, she gets a phone call from Jack saying that he is in jail. Meanwhile Jess drove to New Jersey and she saw her daughter from her car window. Charlie then goes to see Jo, and he tells Jo about him staying at the stables, and that he was not actually staying with a friend of a friend. He says he likes her and wants to be honest with her about why he is here. This is how the episode ends with them accepting each other for who they are, instead of trying to lie to one another which is what they have done previously.