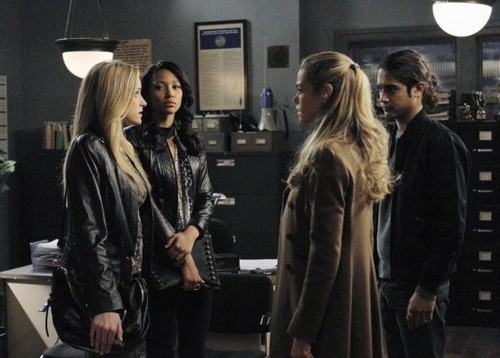 ABC Family’s popular new show Twisted returns tonight for another great episode called, “Danny, Interrupted.”  On tonight’s episode a determined Danny wants to solve the murder cover-up, so he seeks help from an old confidant. Meanwhile, Jo is suspicious of a friend’s motives; Lacey tries to be supportive of Whitney; and Tess gets some shocking info.

On last week’s episode as Jo bonded with Charlie and realized that she need to move on with her life without Danny. Jo surprised everyone, including herself, when she decided to run for student body president, which complicated things with Rico, whose girlfriend Andie was also vying for the job. Danny was still haunted by Vikram, and Lacey, knowing something was up, confronted him about what he’s hiding. Jack’s daughter, Whitney, who had returned to Green Grove after being kicked out of boarding school, encountered Karen and struck up a quick friendship with Lacey.  Did you watch last week’s episode?  If you missed it we have a full and detailed recap, right here.

On tonight’s show with his guilty conscience becoming too much to bear, Danny is determined to uncover the truth about who was responsible for covering up the murder and visits an old confidant for some valuable insight. Jo’s own sense of guilt leads her to question the motives of a friend. Lacey tries to be a good friend to Whitney while struggling to define their complex new relationship. Tess receives some devastating news as she and Kyle try to move on with their lives. The episode, titled “Danny, Interrupted,” was written by Stacy Rukeyser and directed by Executive Producer Gavin Polone.

Tonight’s episode of Twisted isn’t looking good for Jack.  He admitted to sleeping with Karen and on top of that his DNA was found all over Vickram’s crash site. One of the scenarios by itself is bad, but put these two together and Kyle has a case. Even Jack’s daughter Whitney feels like this could be the end of her dad and though she won’t say it aloud – she might be harboring doubts herself. She does knows how much her dad is in love with Karen.

Karen later offered Whitney a place to stay and the younger girl reluctantly agreed to it. She feels like everyone is keeping something from her though by the way Karen and Danny are arguing at the house; she could overhear some pretty valuable information.

Karen had gone back to the precinct to check in on Jack, but ran into Kyle. Kyle took her aside for a chat or to use the actual phrase for what it was – an interrogation. He wanted to know when exactly Jack heard from Karen that the life insurance policy was 10 million dollars. Karen  attempted to put him off by telling the Police chief that Jack only found out  after Vickram’s accident.

And then Kyle pointed out that Jack used to work for Vickram. Why yes he did! You could almost say he was known as Vickram’s right hand man. So wouldn’t he have learned about the life insurance policy prior to Karen telling him?  Also there was the fact that Jack and Karen had an affair back when Vickram was still around and Vickram did tell Tess that he was scared someone was trying to kill him.

All of the innuendos put the necessary doubt in Karen to get her to give up on Jack. And  to be honest the only person she’s ever been willing to go to bat for is her son. So she told Danny that maybe Jack isn’t as a good of a guy as she thought. He could have arranged everything for the money.

Danny doesn’t agree with her. He feels like there’s just way too much evidence pilling up and Jack would never be that stupid. And come on would he really keep Vickram’s cell after he took so much trouble to make the other man’s death look like an accident? Danny doesn’t think so and that’s why someone must be setting Jack up and he has really good guess on who’s behind it.

Meanwhile Jack knows someone is behind making him look dangerous. And because of that he’s mistakenly blaming the Desais. Once he learned that Whitney was staying with them; he told her to find somewhere else. Apparently they broke his heart.

Danny was sad to hear it. He’s been telling both Jo and Lacey that he’s got it covered, but he doesn’t. Danny thinks Charlie is setting up Jack and yet no one wants to hear him out.  Lacey just thinks he’s being jealous and Jo stopped even pretending to care about “warnings” days ago. It was when he visited Jack in the prison that he finally got someone to listen. He confessed that Charlie could be trying to steal his life and then he promised to do whatever he could to get Jack out of jail.

He confronted Charlie. He needed to get this guy to admit to something if only so he could stop feeling like he’s going crazy.

Here’s what he figured out so far:  Charlie started to follow him around him and he must have seen what happened to Vickram. And just like when they were in Juvenile Detention Center together, he used this information to his advantage. Back in their early days Danny had gotten into a fight and Charlie took the blame for it. At the time Danny thought he was simply being a good friend until he realized what Charlie was doing with their secret.

Charlie got the other dleiquents to respect him and their secret kept Danny beholden to him. That’s why Danny did whatever he wanted.  And now Charlie is repeating his old tricks. He’s holding Jack over Danny’s head to get him to confess.

Danny would get sent to prison and Jo and Lacey will then all be for Charlie.

When he couldn’t get Charlie to confess then he went and visited their old therapist. He needed the therapist, in one or another, to tell him that Charlie is dangerous.  If Danny is going to continue to tell people about Charlie then he at least wanted to be sure.

After he got that confirmed he then went to Kyle to confess everything.  As in he admitted to killing to his father (leaving out the part about Jo) and that someone move the body.

Danny told him about Charlie and that Charlie wants Jo. Though, unbeknownst to Danny, Charlie lost Jo all on his own. He staged a beat up by slamming his face into the door. And when Jo came over all concerned, he tried to get her to turn Danny in. After all he is dangerous – just look at the damage on Charlie’s face.

But Joe didn’t want to make up any lies which were what Charlie was trying to talk her into. He wanted her to say that Danny admitted to her that he killed his father without saying that she was there. So when she refused and his plan wasn’t getting him anywhere; he started to lose it. He told her that he wanted a life with her after he had dreamt about it for so long. Even before they met! Talk about creepy!!!

Jo watched him come unhinged and she knew then and there that Danny could be right about her boyfriend. She fled Charlie’s place and returned home to an upset Tess. Admittedly Tess has been missing a lot what with searching for her long lost daughter and then finding out she died only for her to realize that child could still be alive because Vickram had played around with adoption papers; so sure she could have overlooked Danny’s situation but she smart enough to know her daughter knows more than she’s letting on.

Tess asked Jo outright and her daughter told her that she was there when Danny killed his dad!