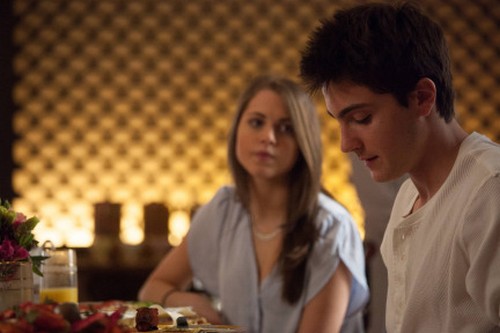 Tonight on FX their original series, TYRANT airs with the third episode of season 1. On tonight’s episode called, “My Brother’s Keeper,” new evidence is discovered in connection to the attempted murder of Jamal.

On the last episode, Barry delays his return to America when his brother was incapacitated. Later, Barry’s nephew’s wife was kidnapped by terrorists. Did you watch the last episode? If you missed it we have a full and detailed recap, right here for you.

On tonight’s episode while Barry’s decision to stay in Abbudin is met with mixed emotion, the discovery of new evidence connected to the attempted murder of Jamal threatens to drive a wedge between the two brothers. Written by Glenn Gordon Caron; directed by Michael Lehmann.

We will be blogging Tyrant’s third episode of season two with all the up-to-the-minute details at 10PM EST so make sure to come back to this spot and watch the show with us. Make sure to refresh often so you get the most current info! In the meantime, sound out in the comments below and let us know what you think of this new series.

Episode 3 of Tyrant kicks off tonight with soldiers knocking on Ahmed’s door, they show him a picture of his wife and ask if he is her husband. Before he has a chance to deny it, his son sees the picture and says it is his “mommy.” The soldiers take Ahmed away, he asks what will happen to his children, and the soldier says his neighbors can watch them.

Jamal wakes up and finds Leila in his shower, he wants to know why she slept in his bed. She explains that she didn’t want him to spend the first night out of the hospital alone. She says that it is important that they act like a couple again. He is sure her sudden interest in their relationship is because he became president, not because she cares about him. She insists she “wants this for him” and kisses him. Jamal isn’t buying it, Leila and his brother Barry are suddenly devoted to him now that he is president.

Meanwhile Barry and his wife are explaining to their kids that he is going to stay in Abuddin. His wife Molly drags him aside and says that she wants her and the kids to stay with him. He says that isn’t necessary, he will only be in Abuddin for a few weeks. He wants them to fly out on the next plane tomorrow.

Jamal’s takes his father’s chair at the head of the table full of his delegates and soldiers. Barry is also seated at the table and Jamal reveals that he has a formal title, “special consult to the president.” Barry tries to explain he doesn’t need a special title, but Jamal won’t hear it. The first order of business is Walid wants a curfew that has been placed on Abuddin tourists to be lifted. Jamal explains that Walid Rashid can have the curfew lifted when he hands over his nephew who gave the deadly syringe to the woman that tried to kill Jamal.

Samira heads to work and says she is babysitting. As she walks out the door Fauzi reminds her not to forget about the curfew.

Jamal’s first day of his presidency is coming to a close, and Barry lectures him about mixing alcohol with his pain killers. Jamal jokes that he is no fun anymore.

Samira doesn’t go babysitting, she pays Walid’s nephew Ihad a visit at his hide-out. She removes her head dress and tries to kiss him, but he pushes him off. He says that she is offending Allah and him.

Jamal and Barry are summoned back to the President’s table, the general announces that Ihab has been taken in to custody with several of his followers. They plan to hang Ihab in the central square at noon tomorrow, and once he is dead they will lift all of the curfews and travel obstructions. Barry isn’t comfortable with a public hanging, he didn’t realize they still did that without a trial in Abuddin.

Barry heads outside and returns Fauzi’s call. Fauzi wants to meet with him ASAP. He tells Barry that they are about to execute the wrong man. He says someone did put that woman up to killing his brother, but it wasn’t Ihab. He says that his daughter Samira was arrested with Ihab. And, if he brings him Samira to him safe and sound, he will tell him who really put a hit out on Jamal.

Barry frees Samira and heads to Fauzi’s house with her. On the ride there he tells her that she needs to tell anyone who asks that Ihad’s men carjacked her and tried to rape her and it was all a misunderstanding. She spits in his face. They arrive at Fauzi’s house, with Samira safe and sound, she storms upstairs. Fauzi reveals to Barry that the man that put out a hit on Jamal was actually Ahmed, the husband of the woman that tried to kill him, and the man that testified that Ihab was responsible.

Barry heads back to the prison and questions Ahmed about his wife’s attempt to kill Jamal. Barry demands to know who ordered him to give his wife the syringe. Barry discovers that there was no resin in the syringe, it was just bathroom cleaner, and he orders him to tell him who gave him the syringe and who told him to lie. Barry promises him that he will see that his children are cared for if he tells him the truth. Ahmed confesses that Jamal is the devil, and he would come to his house and sleep with his wife whenever he wanted. His wife didn’t love Jamal, he used to come to their house and rape her every day. Barry is shocked that his brother was such a monster.

Barry heads back to his room and wakes his wife up in the middle of the night, on the verge of a melt-down he tells her he needs her to stay. He can’t handle everything in Abuddin on his own. She agrees to stay, and then he goes and wakes up Jamal. Barry chokes Jamal and slams him up against the wall, and accuses him of raping Ahmed’s wife. Jamal says he knows he has done bad things, but he is the president now and he just got his brother and his wife back. He promises him that this will never happen again and he is going to be a new man. Barry tells Jamal he can’t hand Ihad tomorrow, Jamal argues that he may not be guilty of this, but he is guilty of trying to overthrow him. Jamal agrees to hang Ahmed instead of Ihad, and promises to make sure his children are taken care of. The next day Ahmed is hung and killed.