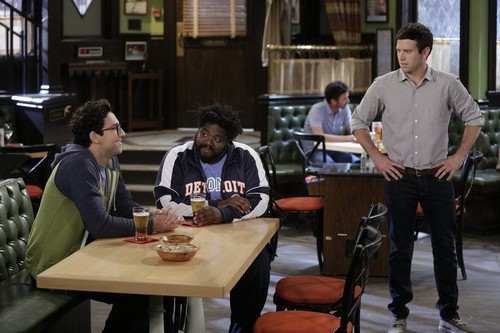 On the last episode when Danny (Chris D’Elia) sent Nicki (guest star Briga Heelan) a message on Justin’s behalf, it forced Justin out of his comfort zone and into action. Meanwhile, the group questioned Danny’s role with Justin and in the group. Bianca Kajlich, Rick Glassman and David Fynn also star. Briga Heelan Guests.  Did you watch last week’s episode?  If you missed it we have a full and detailed recap, right here for you.

Tonight’s third episode is going to be great and you won’t want to miss it. So be sure to tune in for our live coverage of NBC’s Undateable tonight at 9 PM EST! While you wait for our recap, hit the comments and let us know what your thoughts on Undateable so far?

Episode 3 of Undateable begins with Nick and Justin watching television together on his couch, and she jokes about how she can hang all over him and it won’t matter because they are “just friends.”  Justin laughs uneasily because he obviously wants to be more than just friends.

The next day Danny heads to the bar and tells Justin he needs to make a move with Nicki fast, before he is stuck in the friend-zone forever.  Danny says that whenever a girl tries to put him in the friend-zone he takes them for a ride on his motorcycle.  Justin says that he has his own move, he does the “whole cover her eyes from behind game.”

Later that day, Danny, Burski, Brett, Shelly, and Leslie sit in the apartment watching the Detroit football game.  Leslie declares that Detroit sucks, and Shelly shuns her and announces he was born in Detroit and plans to die in Detroit.

At the bar, Justin chats with Nicki.  He says he is friends with a girl and he really wants to be more than friends with her.  Nicki says she is in the same situation with a guy, and Justin knows him.  Justin automatically assumes that she is talking about him.  Five minutes later Justin storms into the apartment, furious, and announces that Nicki doesn’t like him, she likes Danny.

Burski says Danny needs to ignore Nicki because Justin called dibs on her.  Danny explains that he can’t ignore Nicki because that will just make her like him more.  Leslie tells Justin not to worry about it, Nicki just wants a hook-up, girls don’t fall in love with guys like Danny.  Justin agrees, he’s going to go take a shower and put on his gameface and go talk to Nicki.

Leslie heads to the bar and surprises Shelly with an “I Love Detroit” ice cream cake.  He refuses to accept it and excuses himself to the bathroom.  Leslie storms out, and Nicki catches Danny rubbing his neck and proceeds to give him a massage, Justin walks in on them.  Danny follows Justin into his office and Justin orders him to “keep his damn hands off his woman.”  Nicki knocks on the door and asks Danny if he will give her a ride home on his motorcycle again.

After Nicki leaves Justin says “all the puzzle pieces are falling into place,” and accuses Danny of being with Nicki all of the time.  Danny confesses that when he first arrived he was into Nicki, but when he realized that Justin liked her he backed off.  Justin refuses to accept his apology.

Danny is home playing video games and Brett pays him a visit, he says that Justin is down on the bar helping Shelley and Leslie make amends, because that’s what good friends do.  And Justin should be trying to make amends too.

Danny heads down to the bar and informs Justin he is a coward and he needs to open up more and put himself out there.  Justin confesses that he likes Nicki and she overhears everything from the office where Danny told her to wait and listen; she rushes out and jumps in his arms and kisses him.