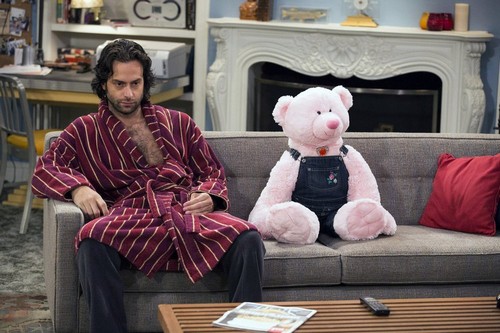 Tonight Undateable continues for a second episode on NBC called, “The Switch”.  In tonight’s episode, Danny gets dating advice from Justin.

On the last episode Justin (Brent Morin) and Danny’s (Chris D’Elia) relationship was put to the test when Nicki (guest star Briga Heelan) revealed she has feelings for Danny. Elsewhere, Leslie (Bianca Kajlich) insulted Detroit not realizing how deeply it would affect Shelly (Ron Funches). Rick Glassman and David Fynn also star.  Did you watch tonight’s first episode?  If you missed it we have a full and detailed recap, right here for you.

On tonight’s fourth episode Danny (Chris D’Elia) discovers that he’s “in like” with a girl, Sabrina (guest star Eva Amurri Martino), for the first time. To guide Danny, Justin, (Brent Morin) having had success with Nicki (guest star Briga Heelan), turns cocky and tries to give him advice on how to act. Meanwhile, Brett (David Fynn) and the gang mess with Justin so he becomes more comfortable with Brett’s sexuality. Bianca Kajlich, Ron Funches and Rick Glassman also star.

Tonight’s fourth episode is going to be great and you won’t want to miss it. So be sure to tune in for our live coverage of NBC’s Undateable tonight at 9:30PM EST! While you wait for our recap, hit the comments and let us know what your thoughts on Undateable so far?

Episode 4 of Undateable begins with Justin and Nicki making out on his couch in their pajamas while Danny watches from the kitchen in disgust.  Justin claims that “this is the most fun he has had since Space Camp.”  Nicki jumps up and prances off and says that it is “going to suck that she has to go to her parents’ house this weekend.”  Danny mentions how uncomfortable they are making him; Nicki and Justin break into song and deliver a creepy rendition Destiny’s Child “Say My Name.”

Danny heads to the bar and finds his sister in a booth with her friend Sabrina from college. She introduces Danny and Sabrina and says that Sabrina is majoring in French Literature.  After Sabrina leaves Danny asks Leslie, “Sister, may I have her?”  Leslie is annoyed; she is sick of Danny sleeping with all of her friends.  Justin thinks that Sabrina is way out of Danny’s league.

Brett arrives at the bar in a hot pink jacket, and Burski and Shelley begin cracking gay jokes.  Justin reprimands them and tells them to “lay off.”  Brett’s annoyed, ever since he came out Justin has been “taking it easy on him.”

Justin heads home and finds Danny and Sabrina hanging out in their underwear, they obviously just hooked up.  Looking defeated, he takes his pink stuffed “Nicki Bear” to bed with him to keep him company since Nicki is out of town.

At the bar the next day Leslie yells at Danny and tells him he was supposed to quit hooking up with his friends.  Danny mentions that Sabrina didn’t call him until 10:30 at night, and he left early in the morning to go see her sister.  Leslie points out that Sabrina doesn’t have a sister.  Justin and Leslie laugh hysterically and Leslie sings, “you got Danny-ed.”

Justin heads home later and finds Danny watching Pretty Woman because Sabrina mentioned that she liked romantic comedies.  Justin is shocked, Danny is opening up and “he is in like.”

Leslie brings Sabrina back to the bar and Justin, Shelly, and Brett all sit down with her and try to convince her to date Danny.  She says she likes dating grown-ups.  Justin offers her free drinks for a month, if she will go out with Danny again, she declines.  Danny walks in and catches them all trying to bribe her to go out on a date with him.

Sabrina leaves and Danny demands to know who was responsible for the intervention with Sabrina.  They all deny it, and Justin confesses that he was just trying to help and be a good friend.  Danny is furious, and he says “paybacks comin’.”

Justin arrives home later and finds that Danny decapitated his Nicki teddy bear and spread her stuffing and body parts all over the apartment.  Justin calls him a “sick son-of-a-bitch” and says he was just trying to give him advice.  Danny confesses that Justin was right, Sabrina is way out of his league.  Justin begins screaming in Danny’s face and telling him that the guy that he knows has confidence.  Danny says that Sabrina is obviously going somewhere and he’s not, and then he sulks off.

The next day Danny meest Sabrina at the bar, he says he knows that he was just a booty-call, but he thinks that they really had a connection.  He confesses that he is used to dating girls, not women like her.  He tells her that she is the kind of woman he wants to see twice.  Sabrina says “going vulnerable is a good move” she agrees to go out with him again, as long as he quits his fake French accent.  She leaves, and Justin and Danny do a victory dance.