Under the Dome LIVE RECAP: Season 2 Special “Inside Chester’s Mill”

BY CDL Staff on June 24, 2014 | Comments: one comment
Related : Recap, Television, Under The Dome 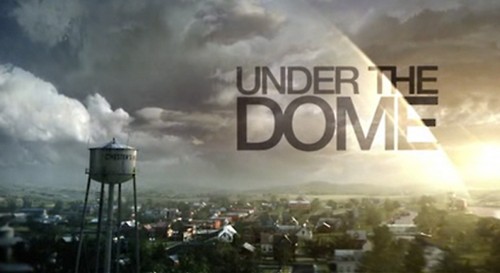 Tonight on CBS their new drama UNDER THE DOME airs with a new episode airs called, “Inside Chester’s Mill.” On tonight’s episode they will show highlights from Season 1 and a sneak peek at what lies ahead for the residents of Chester’s Mill in Season 2. Also: interviews with cast members and executive producers.

On last season’s finale show while the manhunt for Barbie continued, Big Jim got the residents of Chester’s Mill riled up and the town demanded justice for all of Barbie’s supposed crimes. Meanwhile, Joe and Norrie had to find a new hiding place for the mini dome. Did you watch the last season’s finale?  If you missed it and want to get caught up we have a full and detailed recap, right here for you.

On tonight’s show this exclusive one-hour special looks back at the premiere season of the hit summer series, featuring highlights from last season as well as new interviews with the cast and executive producers. In addition, the special will tease what lies ahead for the residents of Chester’s Mill who are still trapped under the mysterious dome with an advance sneak peek at the season two premiere.

This is definitely one series that you will not want to miss this summer. Don’t forget to stay tuned to Celeb Dirty Laundry where we will be live blogging every episode all summer long.

In the season preview of Under the Dome, the entire season one is reviewed with special commentary from the cast members. Reflecting back on season one brings back the memory of the quaint town of Chester’s Mill. As the ground shook with a rumble, a large dome was placed over the small town. Searching for answers, the town locals and visitors come together to find the truth.

In the first season, we met Big Jim. The charismatic, ruthless, and power-hungry mayor of Chester’s Mills. When the dome came down, Big Jim felt it was his duty to lead the town by any means possible. During this process, he developed a loyal following and got blood on his hands many times in order to defend his status in the town.

Junior, Big Jim’s son, had some secrets of his own. After a breakup with Angie, Junior was convinced that the dome was affecting her behavior. To protect her, he locks her up in a shelter where his dad later finds and releases her.

In this episode, we also caught up with Julia. The intuitive reporter who found herself without a husband and in love with the man who killed her husband, Barbie. Barbie was a town visitor who was sent to collect money from Julia’s husband Peter; Peter had a bad gambling addiction. Julia soon finds that Peter left Barbie with no other choice but to kill him. As the first season progressed, the town sees Barbie’s courageous and heroic side time and time again. Julia and Barbie’s feelings for each other continue to grow.

Another love story from the first season was of Joe and Norrie. Joe is a farmer boy who had been separated from his parents when the dome was placed over the town. On the other side of the spectrum was Norie, a city girl with a poor attitude on her way to boot camp. The two find comfort in one another during what they thought would be the final moments of their lives. What they found instead was that the dome protected them from a missile and was impenetrable.

Norrie, Joe, Angie, and Junior realize that their part inside the dome was more significant than any of them had realized. With a combination of their seizures, the discovery of the mini dome, and the messages they were receiving, they become torn about what their next step should be.

So, what’s next for season two? Will the propaganda led by Big Jim result in Barbie’s execution? Or will the dome’s message prevail in making Big Jim the next to go? In tonight’s preview, we saw a glimpse of what’s in store. Norrie finds her mother passed out in her home. Joe and Angie try to help Norrie but is thrown around with all of the moving furniture and objects flying around them. What’s to come for Chester’s Mill this season and will we finally learn the truth about the dome? Hopefully season two will give us some answers!