BY Amanda Austin on July 21, 2014 | Comments: 2 comments
Related : Recap, Television, Under The Dome 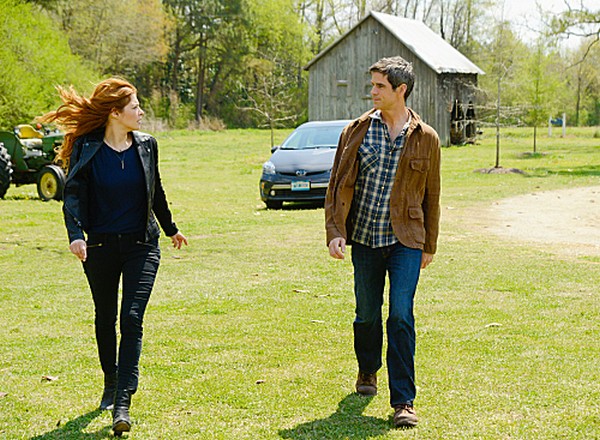 Tonight on CBS their drama UNDER THE DOME airs with a new episode called, “Revelation.” On tonight’s episode Big Jim and Rebecca consider the extreme measure of population control in order to extend resources as conditions in Chester’s Mill worsen. Meanwhile, clues to Melanie’s past and her connection to the dome are revealed.

On the last episode when tensions in Chester’s Mill continued to rise as resources dwindled, Big Jim held a census in order to forecast how long the town could continue to exist under the dire conditions. Meanwhile, a rainstorm brought much-needed water until it changed to acid rain, threatening the lives of everyone it touched. Also, Rebecca and Lyle butted heads over the reasons for the dome’s existence. Did you watch the last episode? If you missed it, we have a detailed recap, right here for you.

On tonight’s show as conditions in Chester’s Mill worsen, Big Jim and Rebecca consider resorting to the extreme measure of population control, which drives a wedge between Barbie and Julia. Meanwhile, clues to Melanie’s past and her connection to the Dome are revealed

This is definitely one series that you will not want to miss this summer. Don’t forget to stay tuned to Celeb Dirty Laundry where we will be live blogging every episode of Under the Dome’s second season all summer long.

Tonight’s episode of Under The Dome begins with Big Jim going over the Chester’s Mill census. Rebecca comes in and reminds him that their food supply is dwindling and he has to make a decision, it’s not that easy for him though because he grew up with the people of Chester Mill. When Jim isn’t looking, Rebecca steals a card from his wallet and says she is headed to the school. Meanwhile Julie pays Sam a visit and fills him in one Rebecca and Jim’s plan to “thin the herd,” she says they have to stop them from killing off the residents of Chester’s Mill.

Jim runs in to Barbie, and Barbie tells him that he doesn’t want him to make any actions without consulting with him first. Jim reassures him they won’t be “thinning the herd” without him. Harriet, one of the members of the town that Jim was considering killing off arrives, and says that her daughter Alice is surrounded by so many people, it’s like they are all her family.

Lyle is in his jail cell praying, and Junior pays him a visit. He tells Lyle that his mom said he has answers, and he wants them. He agrees to break Lyle out of jail so Lyle can show him the answers, but he is making him wear handcuffs.

Rebecca pays a pig farmer a visit, one of his pigs has died from a contagious flu. Rebecca tells the farmer to go get a wheel barrow so that he can get the dead pig out of the pen and away from the others. While he is gone she takes a sample of the pig’s blood in a syringe.

Joe, Norrie, and Melanie reveal to Barbie that they received emails. They take him to the school to the exact spot that they had a WIFI connection. Barbie thinks that there might be something in the lockers in the hallway that they got signal from. Melanie opens one of the lockers, and reveals that she knew that combination because it was her locker in 1988. Norrie shows Barbie the yearbook from 1988 with her picture in it. Joe pleads with Barbie to help them figure out who Melanie really is.

Julia and Sam sneak in to Rebecca’s house, and find a text book about pigs and bloodwork tubes in the refrigerator. They realize that whatever she is up to involves pigs and decide to check out the pig farmers and see if she has paid them a visit.

Barbie takes Melanie, Joe, and Norrie to look at old newspaper clippings on microfilm. They find an article saying that Melanie Cross went missing when she was a teen, and her family had just moved to Chester’s Mill from Zenith. Barbie is shocked, because he is from Zenith too. They come up with a plan to go to Melanie’s old house to see if it jogs any memories.

Lyle takes Junior to his barber shop and gives him all of the post cards that Pauline sent to him. Junior is shocked because each post card is one of Pauline’s paintings, and they are all of things that have happened since the dome came down. One post card is butterflies, another is of blood, and one is a painting of pink stars. Lyle says that Pauline seen a lot more than people gave her credit for.

Jim finds Rebecca at her lab in the school and asks her what she is up to, since she lied and she obviously isn’t working on the windmill. Rebecca explains that the pigs have the flu, and she has injected the flu in to eggs, and that is how they are going to control the population. She has enough eggs to five a quarter of the town the swine flu.

Barrie takes Melanie, Joe, and Norrie to the house that Melanie used to live in according to the newspaper. The door is unlocked, and they walk in and realize the house has been abandoned. Melanie heads upstairs to her old bedroom and finds pink stars on the wall, she remembers drawing them because she used to see them fall outside her window. They look out the window and realize that the stars were falling where they found the mini dome. They head outside to investigate the area.

Jim argues that he doesn’t want to play God and give everyone the flu. Rebecca insists that it’s not playing God, it’s leveling the playing field, and it is survival of the fittest. Whoever survives the flue deserves to live. Meanwhile Julia and Sam arrive at the pig farm and find out that since Rebecca left earlier twelve more pigs have dropped dead. Julia and Sam put two and two together and realize that the flu that killed the pigs is how Rebecca plans to cut down the population. They rush off to stop her.

Barbie, Melanie, Joe, and Norrie go in to the woods. Melanie stands on the exact spot where the mini dome was and begins having flashbacks. In 1988 she was Sam’s girlfriend, and they found a meteor in the woods in that exact spot. When they touched the meteor it cracked open and there was a glowing egg inside. Melanie picked the egg up and tried to take it with her, but Sam panicked and pushed her because she wouldn’t put the glowing egg down, she hit her head on the meteor. Melanie gasps and says, “I am Melanie Cross, and this is where I died.”

Julia and Sam barge in to town meeting that Big Jim is holding, and announce to every one that they can’t drink the water in the pitchers. Jim denies poisoning the town with the swine flu, and Sam makes him empty his pockets, but they don’t find anything. They realize Rebecca must have the virus and run out of the meeting to find her.

Junior takes Lyle’s to Sam’s house to find his mother’s journals. He thinks that since his mom was like a prophet she might have wrote in her journals who killed Angie. Once they find the journal, Lyle hits Junior over the head with a crow bar and escapes, taking the journal with him.

Rebecca heads to the Chester’s Mill prayer meeting and after she overhears that a dozen more pigs died, she got cold feet and didn’t put the virus in to the holy water. Julia tackles Rebecca as she comes out of the church and learns that Rebecca didn’t release the virus. Julia and Sam take Jim and Rebecca to jail and lock them up, they are going to let the town decide their fate.

Sam walks Julia home and she thanks him for believing her. Barbie knocks on the door and interrupts, but Julia refuses to let him in. After he leaves, Sam tries to kiss Julia, but she pushes him off from her. After she turns around Sam pulls his shirt down and reveals her handprints on his skin, they fizzle away while Julia isn’t looking.