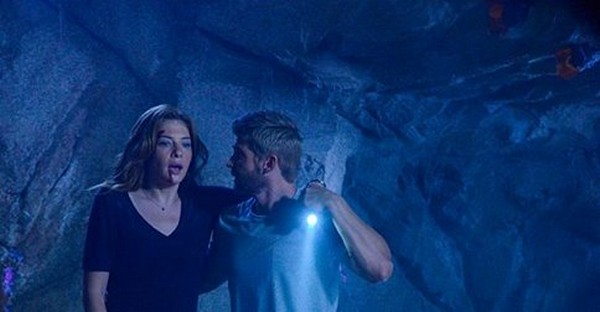 Tonight on CBS Under the Dome, based on the novel of the same name by Stephen King, returns with an all new Monday September 22, season 2 finale called, “Go Now.” On tonight’s episode season 2 ends with the discovery of a potential exit from the Dome, just as the citizens trapped in Chester’s Mill face imminent danger.

On last week’s episode a new threat from the Dome intensified, the residents of Chester’s Mill found themselves at risk of being crushed to death. Meanwhile, Melanie’s health continued to deteriorate as the fate of the egg remained unknown. Big Jim congratulated Pauline with a kiss and as they were kissing, Lyle stabbed her in the back. As Pauline was dying, Lyle told Big Jim that now he could join her in heaven, and encouraged Big Jim to stab him and finish the job. Big Jim does so in a fit of rage. Did you watch the episode? If you missed it we have a full and detailed recap, right here for you.

On tonight’s episode a potential exit from the Dome is revealed just as the walls begin closing in on those trapped in Chester’s Mill.

This is definitely one series finale that you don’t want to miss. Don’t forget to stay tuned to Celeb Dirty Laundry where we will be live blogging the final episode of season 2 Under the Dome.

The crater, the very same one Melanie disappeared into, while scary at first is later shown to be the answer to escaping the dome.

The truth about the crater came out after Pauline had another vision. It seems she didn’t die right away when her ex stabbed her last week. She was merely severely injured but, all the same, being so close to death ended up clearing her most recent psychic fogginess. The vision she had revealed the crater was the out they’ve all been hoping for. However, Julia who would have normally been given the task of leading the people of Chester’s Mill to freedom – wasn’t in the vision. Instead Pauline said a mysterious man was going to bring the townspeople to safety.

This man may or may not be a complete stranger to them – Pauline couldn’t be pushed into revealing who he was. She never saw his face in the vision. And besides she was in desperate need of medical attention at the time. Something Big Jim was going to get for her no matter what though Pauline was secretly working to thwart him.

Big Jim loves her too much, Junior needs her, and Sam could never do what she needs him to do. Not even for his sister so Pauline made sure all the men in her life was out of the room before she asked Rebecca for a special kind of favor. You see, one of Pauline’s earlier visions showed her she was going to die and despite her personal feelings on the matter – Pauline doesn’t want to actively work against the vision. Especially as she believes her visions reveal what the dome really wants. So she asked Rebecca to help ease her passing.

And Rebecca found out she couldn’t turn down someone’s last request. So she assisted in Pauline’s death and both Big Jim and Sam arrived in time to say goodbye.

But Rebecca hadn’t thought things through. She had injected Pauline with something and then foolishly held onto the evidence even as Big Jim entered the room. When Jim saw the needle in her hand – it was like flashing red in front of a bull. He neither cared nor was interested in why she killed Pauline. All he cared about was that his wife was dead and that he needed to take it out on someone.

Jim knocked out Sam when he attempted to intervene and then he killed Rebecca. Yet this was merely the start of Jim’s reign of terror. He wanted the dome to bring his wife back and when it refused to comply – he told the dome he was going to kill all those that were special to it. And he was going to target Julia next.

Julia and the rest of the gang were leading groups of the townspeople to the crater as part of their plan to escape the dome. It was a planned exodus and they were all focused on doing it as quickly as possible. Else they left it too long and the underground tunnels became too hazardous to use. But Jim had drawn Julia from out underneath her friends’ protection by using his own beloved friend and neighbor, Andrea.

Andrea called Julia asking for help and Julia didn’t even second guess it!

Once he was done with her, Jim killed Andrea. And seeing as she was a friend of his – he decided to kill her fast. He considered that to be merciful. Julia on the other hand was never his friend so he was planning on killing her differently. Slow, brutal, and with a hammer!

Julia managed to escape him and eventually it was Junior that found his dad (he was the one that found the unconscious Sam lying next to Rebecca’s body) rather than the other way around. When Jim saw his son he thought he could bully the younger man into doing his bidding like he normally would have. Yet this time that little ploy of his didn’t work.

Junior shot his dad and thereby slowed the older man down. Then he joined Julia in the tunnels but it was too late for them. The earthquakes had caused an underground rupture, like they had all feared would happen, and so the two of them were unable to join their friends.

Barbie promised Julia he was going to come back for her. He would have stayed with her too if she allowed him. But she had realized he was the man in Pauline’s vision and told him it was his duty to help everyone else first. So Barbie led the townspeople through the tunnels and they came upon what looked like a dead end.

Though after Barbie touched it – the wall that was blocking them off suddenly crumbled right in front of them. And, surprisingly, Melanie was behind that wall. She told them to follow her. She said “we’re going home”.