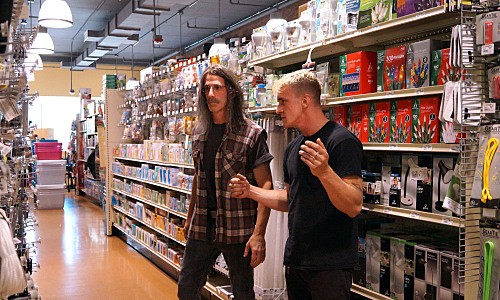 Tonight on CBS their Emmy award winning reality show, Undercover Boss returns for a new season in its season 6 December 14, 2014 episode 1 premiere.  On tonight episode season 6 begins with True Value president and CEO John Hartmann, a former FBI agent, working undercover at his hardware company and we will be recapping all the fun for you.

On last episode Jeff Platt, CEO of Sky Zone, the world’s first indoor trampoline park, jumped into action as a referee for a children’s dodgeball game. On another assignment, the 29-year-old boss – the youngest in the show’s history – had trouble hiding his in-depth knowledge of the company when working in community relations. Did you watch the last episode? If you missed it, we have a full and detailed recap right here for you.

On tonight’s episode as per the CBS synopsis, ” John Hartmann, the President and CEO of True Value, one of the largest hardware cooperatives in the world, reactivates his undercover skills from his time as an FBI agent when he investigates the state of the True Value company and employees, on the sixth season premiere of UNDERCOVER BOSS, on the CBS Television Network. During his “special assignment,” the boss is shocked by the inappropriate on-the-job pickup artist antics of one of the employees.”

Tonight’s episode of Undercover Boss kicks off with John Hartman, president and CEO of True Value hardware – he plans to go undercover and join his employees to see what is really going on inside his company.  And, he has his work cut out for him with a horrible employee who seems to have no respect for the company or customers.

John put himself through college by working several part time jobs, and after two years in law school – he was recruited by the FBI.  He has experience working undercover and with fake aliases.  After ten years in the FBI, he decided to go corporate and in 2013 he was named the president and CEO of True Value.

John gets a fake tattoo and mustache, with a wig and glasses, and heads undercover as Louis, a handy man that is trying to win $200,000 on a reality TV show.  Louis heads to Massachusetts where he is introduced to Brad – a sales associate.  Brad jokes that a normal day at True Value is “smoking some cigarettes, flirting with women, and selling some sh-t.”  While Louis straightens the shelves, Brad brags that he loves meeting women at True Value – and he always does side work for them.

John is concerned about Brad, but after getting to know him a little bit and learning that he had some legal trouble and failed out of college – Brad explains that he does construction for conservationists.  John is torn, because Brad can’t be talking about womanizing at work, but at the same time he is very knowledgeable and seems to have his heart in the right place.

The next day John goes under cover as Louis to the True Value warehouse where he reports to an employee named Terrell.  Terrell gives him a crash course on how to drive a forklift and then rushes John through the factory and explains that if their rate is faster they will get an extra $0.25 per hour.  While they are unpacking the boxes Terrell tells John about himself and reveals that his step-dad was murdered about four years ago and he was a little lost for awhile until he had a daughter and went to work at True Value.  Terrell says that he wishes he could afford to go back to college, and he would major in criminal justice for juveniles.

Next John reports to Carr Hardware, a True Value store.  He arrives at the store and is introduced to Chris, the front end manager.  They wait on a woman who is shopping for a weed whacker, unfortunately they don’t have the one she wants in stock and they will have to order it, they will have it in two business days.  She isn’t exactly thrilled, but agrees to wait.  Afterwards, Chris shows John how to do some glass work and they discuss their personal lives.  Chris explains that he just got married, bought a house, and has a daughter.

The next day John reports to another store to train to become a cashier.  He meets a girl named Lexie who gives him a quick tutorial on the cash register and explains to him that when customers arrive he always has to greet them, and multi task.  Lexi explains that the register crashes on  daily basis, and when it does he has to try and keep the customers happy.  Next, they head out to the garden center and get to know each other while they straighten up the area.  Lexi reveals that she wants to be a nurse, but she already has about $55,000 in college debt.  She reveals that she is moving back in with her parents because she can’t afford to pay her student loans off and support herself.

Now, it’s time for John to reveal his true identity to his True Value employees.  Brad is up first, John explains to him that he was disgusted by him, and their customers need to be treated respectfully.  John thinks that Brad is making too many excuses for himself and he needs to be a “better Brad.”  John says that every fall True Value has a Habitat for Humanity project, and he is going to fly Brad out to the next project and mentor him and help him get his life together.

Chris meets up with John next, he informs him he is going to get a better computer system up and running in the store and he is going to give him $5,000 to go on a honeymoon with his wife, and $10,000 to put away for his daughter’s college fund.  Chris is nearly in tears when John announces he is also going to pay $25,000 on his mortgage for his new house.

Terrell is just as shocked when John announces he is going to give him $12,000 to pay off his tickets and improve his credit and he is going to give him $10,000 to use towards his college education and another $10,000 to put away for his daughter’s college education.  John also is giving him $5,000 to take his daughter to Disney, and an additional $20,000 to buy a new car so he doesn’t need to ride his bike.

Lexi is the final employee to sit down with John, he tells her that they are going to get the cash register system at her store fixed and Lexi is thrilled.  She is shocked when he announces he is going to give her $5,000 to go towards finding a house for herself.  He also is going to give her $10,000 to finish nursing school.  When he reveals that he is going to pay off her $50,000 in student loans and give her a clean start – Lexi breaks down in tears and argues that it is way too much and hugs him and thanks him.