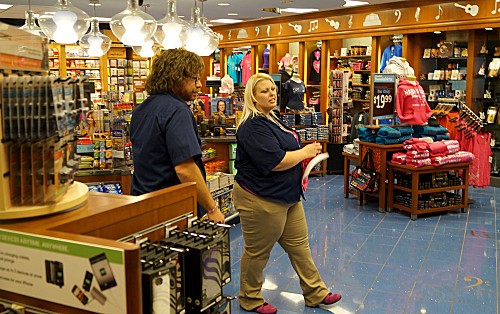 A whole new episode of the two-time Emmy Award-nominated reality series UNDERCOVER BOSS returns for another new episode tonight called “Hudson Group.”  On tonight’s episode The President and CEO of Dufry subsidiary Hudson Group will go  incognito.  Stay tuned as we live blog the episode with all the up-to-the-minute details.

If you have never watched the show before Undercover Boss is an Emmy Award-winning reality series that follows high-level corporate executives as they slip anonymously into the rank-and-file of their own companies. Each week, a different executive will leave the comfort of their corner office for an undercover mission to examine the inner workings of their corporation.

On tonight’s episode Joe DiDomizio, President and CEO of Hudson Group, the travel retailer that operates in 70 airports and transit terminals in the U.S. and Canada, goes on an undercover mission in his company.  Joe said about his experience, “Our employees are clearly the backbone of our business, and it was great to witness how their dedication to customer service is unsurpassed in the travel industry.”

Tonight’s episode of Undercover Boss features Hudson Group, a travel retailer. They have shops set up in airports, train stations, hotels, etc. Joe Didomizio, the President of Hudson Group, oversees over 700 travel stores around the country.

When Joe graduated from college he went to go work at his father’s store, Hudson News. Over the years Joe learned the business from the ground up, and now he is running the entire company.

Joe will go undercover as a “beach bum named Bobby,” to work at one of the stores he owns. The employees in the Seattle store he will be working at think that he is a contestant on a reality game show trying to win a trip around the world.

Bobby reports to his new boss Elizabeth in Seattle, who has no idea he is really running the company, and she begins teaching him how to make lattes on the coffee machine. Elizabeth gives him a quick tutorial and then leaves him to serve customers while she heads out to clean up the store. Bobby isn’t off to a good start, he can’t figure out how to swipe credit cards, he gave one customer the wrong change, and everyone is growing impatient because they have flights to catch. Finally Elizabeth comes back behind the counter and helps him finish his orders.

After the rush is gone, Elizabeth and Bobby spend some time getting to know each other. Elizabeth confides in Bobby that she supports her entire family with her paychecks. She has Carpo Tunnel and Diabetes, but she doesn’t have any sick time or personal time.

Bobby heads over to another Hudson News store in the airport, where he will be working as a books sales associate. Jason, another Hudson News employee shows him how to manage the books in the computer database. Bobby learns that Jason has to run back and forth between the two stores in the airport to make sure each of the stores have the correct amount merchandise. Bobby is impressed that Jason knows all of the books they sell, and what books sell out faster. He thinks Jason would do well in a management position.

Next, Joe AKA Bobby, heads to Nashville to go undercover in another Hudson News store. Jessica, his new boss, puts him right to work cleaning up the store. Once the store is spotless, Jessica begins training him on the cash register. One of Bobby’s customer gets a bottle of water that won’t scan, so they have to enter it into the cash register manually. Jessica explains that their registers aren’t up to date, so a lot of their products aren’t in the database.

After meeting Jessica, Bobby/Joe heads to a Hudson group distribution center, which is a warehouse full of Hudson News products. Bobby has to fill orders from Hudson News stores around the country and package them. Charity, the woman in charge of the distribution center, doesn’t think Bobby “will cut it.” Bobby is spending hours trying to fill an order because he has no idea where anything is located, and the warehouse is unorganized. Charity chats with Bobby and says that she is supporting her Mom and her sister, who has “addiction problems.” She also confesses that she doesn’t feel appreciated. Charity says that when the executives come through the distribution center they don’t even say “hi” to her.

It’s time for Joe to reveal his real identity to his employees. Elizabeth, Jason, and Charity come in to meet Joe Dimozio and discuss what he learned while working undercover at his Hudson News stores.

Joe says his time Charity in the warehouse was “eye-opening,” he is going to have someone come in and organize the warehouse she works in. He is going to promote Charity to a management position in Las Vegas, and pay for her expenses to move there. He is also going to offer her Mom a job in one of their distribution warehouses in Vegas so that she can move with her. He is going to pay off Charity’s $18,000.00 in student loans, and give her $30,000.00 to help out with her family’s expenses.

Next Joe meets with Jessica, and he tells her that he is going to promote her to customer service training manager, which comes with a 40% pay increase. Jessica also mentioned that her car needs repairs while they were working together, so Joe is going to buy her a brand new car. Joe wants to take some of the pressure off from Jessica and her three kids, so he is going to give her $40,000.00. Jessica is blown away, that money is going to “completely change her life.”

Joe sits down with Jason next, and Joe stresses how impressed he was with Jason’s knowledge of the book business. He offers to become Jason’s mentor, and offers him a promotion to a manager position which comes with a 45% pay increase. Jason also mentioned he is a fan of World War Craft, so Joe is going to send him and his wife on an all-expense paid trip to the convention. He is also going to give Jason $20,000.00 to help out with his family’s bills.

Elizabeth comes in and meets with Joe, and Joe stresses that he thinks people come to the store just to see her. He feels for Elizabeth because he also has diabetes. He wants Elizabeth to get the surgery for Carpo Tunnel, and he is going to pay for it, and make sure she gets paid sick time while she is off from work. Joe is also going to pay Elizabeth’s rent for the year, which is $1200.00 a month. And, he is also going to give her $20,000.00 so that she can set it aside for retirement. Elizabeth is blown away, she has “never seen that kind of money.” She thinks Joe is “one beautiful man.”