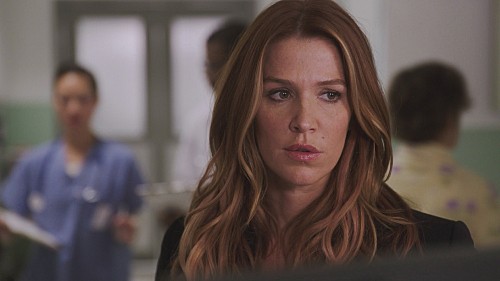 Tonight on CBS UNFORGETTABLE continues with a new episode called, “Flesh and Blood.”  In it Carrie catches an elusive assassin but then is forced to trust the woman when it is revealed she has vital information that could prevent a terrorist attack on New York City.

On last week’s episode after a wealthy couple is murdered, Carrie and Al pose as a married couple to lure in the killer, who Al believes is linked to a series of unsolved homicides he once investigated.  Did you watch last week’s episode?  We did and we recapped it right here, for you.

On tonight’s episode Carrie catches a deadly assassin who has eluded her before, but must put her personal vendetta aside when it’s revealed that the woman has vital information to prevent a terrorist attack on New York City.

Tonight’s episode 9 looks like it going to be great and you won’t want to miss it. So be sure to tune in for our live coverage of CBS’s Unforgettable episode 8 — tonight at 9 PM EST! While you wait for our recap check out the sneak peek video below of tonight’s episode!

Jackie is back! She risked her cover in order to return and murder a man in his hospital bed. If she had left him alone then Ted Muscat could have died naturally from his illness, but she went through the trouble of tracking him so Ted must be more than he seems.

Ted was a high school science teacher. One that loved by both faculty and his student which is really rare. However Carrie had a hunch about him and she made Jay dig deeper into Ted’s back ground.

Besides being a seemingly good teacher, Ted was also Alpha Five operative. At least he used to be before he was reported dead three years ago along with several of his compadres. And just when Carrie started to delve deeper into Jackie’s motive – a second operative showed up dead.

So it looks like Jackie is working her way through all the Alpha Five operatives that allegedly died.

Yet the operatives weren’t as retired as they had the world believing. Jay found highly detailed plans at one of the operatives’ homes. As in they were building a nuclear bomb.

Later on at the office, ICA approached Carrie and Al. They’ve been on to the idea that the Alpha Fives were planning a terrorist attack and they’ve also figured out that Jackie must have been a part of their team. But that doesn’t actually explain why Jackie would be killing off her partners and Carrie even says so.

The agents believe that Jackie is merely the cleaner. She’s making sure they’re plans don’t leak to the outside world before the bomb is ready. And to do so she had to start killing off the underlings.

Carrie on the other hand doubts the agents’ theories. She feels like they’re too quick to underestimate Jackie and she was right. They baited Jackie with one of the Alpha Five members they had under surveillance and still she managed to get to the operative despite the fact he was heavily guarded.

Jackie would have gotten away if it wasn’t for Carrie. Carrie broke protocol to go into the building and it was good thing too. Because she was the only one that could have and in fact did spot Jackie’s trademark ring.

But just because Carried was the one to bring in doesn’t mean her team has first dibs. The ICA agents quickly and quite aggressively quarantined their terrorist. Jackie was there’s and they weren’t so big on sharing. However Carrie was able to convince them to give her a minute alone with Jackie seeing as they were old friends and all.

Jackie wanted to tell her something but she couldn’t do it with the agents watching so she ended up lucky that she had taken precautions earlier. Without Carrie’s knowledge, Jackie had hid things in her memory.

And Carrie did find out what Jackie wanted her to, but she also found out more than what the other woman was planning on. Jackie needs Carrie’s help to get something to the elusive Viktor, a top Alpha Five operative, and in return Jackie will get her son back.

She had a little boy with Viktor and when she tried to leave Alpha Five he took her son. Jackie thought he had died with his father three years ago when the plane they were supposed to be on crashed, but once she learned the truth – she began hunting her old cronies. Though she denies killing at least one of them. What she did do was get the key the bomb needs.

Without it Viktor can’t set off the bomb.

Jackie would have told this to the ICA agents, but she knows that Viktor has men inside of the organization. And Jay even found proof that the agents on her case weren’t randomly picked – they specially volunteered for the job.

Jay also found out that the bomb and plan behind it were originally thought up by American forces working with Al Qaeda. They were hoping to set off a war in the Middle East and somehow Viktor got mixed up with that.

Carrie and Al attempted to get Jackie away from the ICA agents yet they were caught and Jackie was once again taken into custody. But the agents didn’t take her to their official office. Unless Viktor’s secret headquarters suddenly became the stopping point for ICA.

Jackie handed the USB with the key for the bomb and Viktor had gallantly given her a few seconds to see her son alive and healthy.

She saw her son before she handed over the USB and so when Viktor found out that he’d been set up – it was too late to hurt Jackie further. The task force came in one big sweep. They picked up the ICA agents along with Viktor. And though Jackie will most likely spend the rest of her life in prison – she now knows that her son is safe from his father.