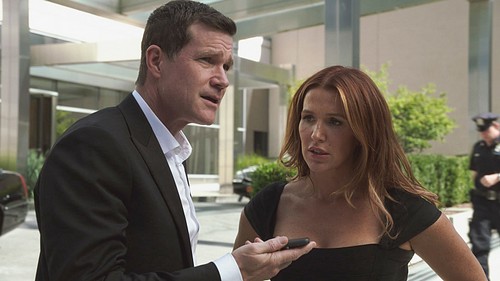 Tonight on CBS UNFORGETTABLE continues with a new episode called, “Omega Hour” and on this episode a cybercriminal traps Eliot and the mayor in an elevator, and threatens to kill them. Meanwhile, Carrie works to thwart the deadly plot.

On last week’s episode Eliot lets Carrie and Al stayed in his Hamptons beach house in exchange for help with a local murder investigation. The probe proved to be a challenge due to the tight-knit community’s refused to give up its secrets.  Did you watch last week’s episode?  If you missed it we have a full and detailed recap, right here for you.

On tonight’s episode when Carrie and Elliott are attending a party sponsored by the mayor, a group of criminals seizes control of the building, and demand a hefty ransom. It is up to Carrie to thwart their plans by playing from the Die Hard book.

Tonight’s episode 12 looks like it going to be great and you won’t want to miss it. So be sure to tune in for our live coverage of CBS’s Unforgettable episode 12— tonight at 9 PM EST! While you wait for our recap let us know how much you are enjoying this season of Unforgettable?

The Mayor went out of his way to invite Major Crimes to a grand opening and then when they arrived – he ignored them. Al who could have been counted on to come up with smart remarks had to miss out on the whole getting snubbed. He couldn’t make it because he was in a wedding party and so it’s just Carrie, Joanne and Eliot in attendance for the Mayor’s showboating.

And that scenario left Carrie without any protection. Not that she’s in any real danger per se, but she does have to deal with an aggressive flirter by the name of Ron Skinner. It’s his party so it would have been rude for Carrie to dismiss him. He’s opening up a suite of luxury apartments (unlike the city has ever seen before) and even wanted to show Carrie one of the suites… preferably alone. Though he quickly changed his mind on that front when he realized she was a joint package with Joanne.

As for Eliot, he was leaving with the Mayor when Skinner decided to join them. He had had enough of his own importance by then and wasn’t in the mood to stick around.

All three men were in the elevator when it suddenly stopped. However it wasn’t maintenance error like the Mayor and Eliot were hoping. Unbeknownst to them, they had been hijacked.

Their elevator dropped several feet and then abruptly stopped. Apparently, the masterminds behind the rigging didn’t want to kill anyone unless they have to – they’re end game is all about money. So holding both the Mayor and one of New York’s wealthiest pedestrians came in handy for them and Eliot being there as well was just the topping.

Eliot was able to connect the criminals straight to the NYPD and Al was told about the ransom demand the same time as the captives.

The man in charge is calling himself Alpha Omega. He was also at the party although his latest tactics show that he wasn’t looking to buy. It seems he was actually surveying the place for any weaknesses and guess what – he didn’t find any!

Skinner built the most technological advanced apartment building in world, but he let his paranoia get away from him. He was a security nut and he was deadly serious about it. As in he turned his apartment building into a fortress. The police can’t get in and the bad guys know that for a fact.

They had taken the last stranglers at the party as hostages thinking it would all be easy. They broke into the building’s security system and can monitor everything that’s going on outside. Yet they overlooked what could happen from the inside.

Joanne and Carrie were still at the party when the gunmen showed up. They were smart enough to take cover before getting noticed.

Carrie wants to help take down the gunmen, much to Al’s dismay, and keep her boss safe during the process. But it’s hard to do that while also protecting Joanne. Jo, for all her spunk, isn’t cut out for field work and luckily she knows it. Joanne left Carrie by herself in order to take care of one of the injured hostages. She didn’t want to drag the other woman down.

And Carrie used her newfound position to actively pursue the gunmen. She managed to take out several of them though her main concern was with what’s going on in the elevator.

Skinner can’t raise the money to ransom himself or his friends and the Mayor’s office hasn’t exactly been forthcoming. So this definitely doesn’t look good for everyone trapped inside the building. Omega is threatening to begin killing people if they don’t get their desired hundred million.

Jay thought that was rare for them. These people are known as cyber hackers. They would normally go for robbing a back rather than use hostages.

Carrie was able to work through the men guarding the hostages. And with some assistance from Joanne, they were able to release the last partygoers. Joanne went with them to make sure they would be alright leaving the building, but sadly for Carrie; she couldn’t finish of the rest of the criminals on her own.

The men that were left guarding the surveillance cameras are the most dangerous. They and their leader were in charge of that elevator and they have the power of killing 3 people with a mere press of a button. And when Carrie tried to take them; they ended up catching her instead.

Al has a plan to help the remaining the hostages though he wanted to hear from Carrie first. He needed to reassure himself that she was alright before he risked everything by turning off the power grind. In turning the power off – the backup breaks should kick in without interference.

But Al’s plan still won’t work in their favor. Carrie escaped her captors in time to give Al the go ahead and only then, when everything was said and done, did she realize that there was a bomb in the building.

Omega tied a bomb to the elevator wires and when the power shut down he then activated it.

Carrie quickly helped the men inside before the bomb could do away with all of them. Though, as it turns out, the bomb didn’t do any damage. Why? Because it was never met to.

Omega didn’t want the money. He did all of this to get the city to turn the power grind off like Jay had suspected earlier. Al had dismissed that theory, but Carrie convinced him Omega’s plan was much larger than just robbing banks. Omega wanted to crash the market.

He was a cyber-terrorist and thought the he could start the world anew by removing the ugliness of greed. It was crazy scheme and he hadn’t counted on either Al or Carrie.

They went back into the building and found Omega hiding in Skinner’s panic room. And they managed to disable him before he could release his deadly computer virus onto the world.

What did they get in return for such acts of bravery – a speech! The Mayor gave them a thank you speech. When, really, whatever happened to a key to the city?