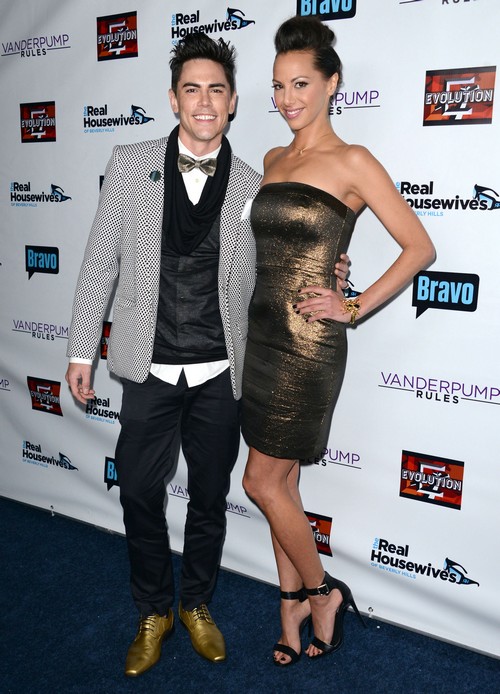 Last week on the Vanderpump Rules Season 2 reunion on Bravo, Tom Sandoval and Ariana Madix revealed that they are now dating. After the Season 2 finale of Vanderpump Rules aired, Tom finally kicked Kristen Doute and her cheating to the curb, and hooked up with long-time friend Ariana Madix. Ironically Kristen spent the majority of Season 2 of Vanderpump Rules accusing Tom of cheating on her with Ariana, in the finale we learned that Tom did actually kiss Ariana three years ago, but the real cheater was actually Kristen! She had the nerve to accuse Tom of cheating on her, when she was actually sleeping with Tom’s best friend Jax Taylor.

After the reunion aired on Bravo, and Tom and Ariana announced they were together, Kristen Doute was furious. Kristen gave an exclusive interview to In Touch Magazine and claimed that just last month Tom cheated on Ariana and made out with her in a hotel room in NYC. Oh the drama! No wonder Stassi Schroeder ran to other side of the country to get away from her Sur co-workers.

Tom Sandoval posted an interesting post on Instagram, slamming Kristen’s allegations, and denying that he never touched her in NYC. Here’s what Sandoval had to say about hooking up with Kristen in NYC. “As far as the absurd statement in InTouch that Kristen and I made out in NY, well I can tell you with 100% certainty that it is false.” Tom went on to explain that he and Kristen were in NY to tape WWHL, and Kristen came to his hotel room. She wanted to watch RHOBH with him, but “became aggressive.” Tom claims that he knew Kristen was up to something, so he video-taped them together in his hotel room. Now, Tom is threatening to release the video tapes to the press to prove that he never touched her that night, let alone made out with her, in his hotel room. He also goes on to say that, “I really feel sorry for her and hope she gets the help she needs, and gets off the path of destruction.”

Tom and Kristen have both proved multiple times on Vanderpump Rules that they are really, really good liars. We were leaning towards believing Tom on this one, but then he went back on Instagram and deleted the entire post claiming that Kristen Doute was lying, which is really suspicious. So, who do you guys think is telling the truth, Tom or Kristen? Or, are you just as sick of their drama as we are? Let us know in the comment section below.