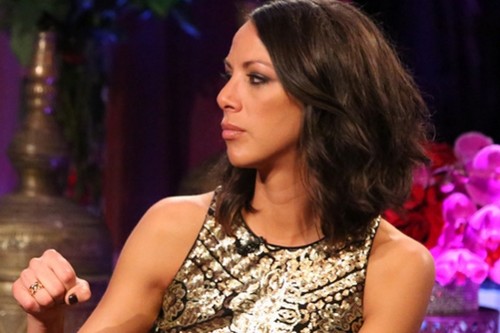 Tonight on Bravo VANDERPUMP RULES continues with a new episode called, “Reunion Part 1.”  On tonight’s episode as the SUR-vers and Andy Cohen assemble, Stassi and Kristen face-off, while Tom makes a surprise revelation..  Did you watch last week’s show?  We did and we recapped it right here for you.

On last week’s episode in the season finale, SUR’s sexy annual photo shoot turned tearful as Stassi attacked Jax for his womanizing, and Lisa helped Tom deal with the growing evidence of Kristen’s infidelity. Things came to an explosive head at Scheana’s engagement party when Kristen and Tom finally faced off with Stassi and Jax.

On tonight’s episode Andy Cohen brings Lisa Vanderpump and her sexy staff together at SUR for the first time since the shocking season finale. Stassi faces off against Kristen, Tom makes a surprise revelation about his relationship with Ariana, and Jax and Tom confront each other for the first time since their fight. Andy uncovers who’s been dumped, who’s sleeping with whom, and who might be leaving SUR for good.

Tonight’s episode is going to be another drama packed one, which you won’t want to miss. So be sure to tune in for our live coverage of Bravos’ Vanderpump Rules Season 2 reunion show — tonight at 10PM EST! While you wait for our recap, hit the comments and let us know how excited you are about the new episode of VR tonight and check out the sneak peek video below of tonight’s episode!

Tonight’s Vanderpump Rules Season 2 reunion takes place at Sur restaurant, with Bravo cost Andy Cohen.  Since filming Stassi has gone even blonder, and Katie has returned to brunette.  Tom Sandoval and Kristen Doute have split up since the season finale of Vanderpump Rules.

Lisa announces that all of her employees are still working at Sur, except for Stassi.  She turned her uniforms in about a month ago, and hasn’t worked at Sur since.  Jax “likes to come to work now,” he thinks that all of the tension has gone away.

First Andy addresses Stassi and Scheana’s friendship, or lack of.  Scheana comes to the conclusion that their friendship meant a lot more to her than it did to Stassi.

Jax announces that he is completely over Stassi, if she wanted him back now he wouldn’t even consider it.  Stassi does feel bad about the time Jax cried at dinner, because she didn’t realize at the time that he had just tattooed her name on his arm.  Stassi has a boyfriend now, named Patrick, and she is very happy.  Her parents have met Patrick, and they like him much better than Jax.

After Stassi met Patrick, she left Sur, and didn’t even call Lisa and tell her she quit.  Lisa is annoyed because she thinks she at least deserved a phone call from Stassi letting her know that she was quitting.  Stassi confesses that after everything that happened with friends at Sur, she “was just done.”

Next Andy addresses Scheana’s “singing.”  Scheana laughs it off and says that she knows she isn’t a good singer, but she loves entertaining people and putting on shows.  She says that when Andy retires, she plans on taking his job.

Andy asks Jax about his alleged affair with Golnesa from Shahs of Sunset, but Jax denies that they are hooking up.  He is currently single.  Jax thinks that he has hooked up with over 300 girls, and he may be a sex addict.  Lisa thinks that the only reason he stays at Sur is so he can pick up girls.

Tom Sandoval is in the hot seat now.  First they discuss Tom cheating on Kristen in Vegas.  He claims he cheated on her, because he knew their relationship was already over.  What we didn’t know was that Kristen had a three month long affair with another employee at Sur.  When Tom kissed Ariana in Vegas, it was because Kristen was home cheating on him.  Tom says that out of all of the people at Sur the only ones he trusted were Ariana and Schwartz.

Ariana joins the Sur staff at the reunion.  Lisa wants to know why Ariana denied hooking up with Tom to her.  To this day, Ariana and Tom still claim that all they did in Vegas was kiss, regardless of what anyone thinks.  The reason Tom lied for so long was because he knew no one would believe that all they did was kiss.  Tom and Ariana are actually dating now though.

Now that Kristen knows they are dating, she says she is “f—-g heartbroken.”  But, now Kristen is dating a 21 year old busboy at Sur named James.  Tom is annoyed, he was in a band with James, they were even going to move in together.  He thinks Kristen is only hooking up with James to get back at him.  Andy points out that ironically all of Kristen’s suspicions and paranoia about Tom and Ariana actually drove Tom and Ariana together.

Next they address the Sur team’s trip to Cabo, and Jax no realizes that it was Stassi’s grand plan to seduce Jax in Cabo flirt with him until he admitted that Tom and Ariana hooked up.  All of their coworkers agree that Jax will do anything when it comes to Stassi, she has “Jedi mind-control over him.”

In Cabo there was also the ordeal when Schwartz threw his drink at Katie.  Andy points out that Katie was ridiculously drunk in Cabo, Katie admits that watching herself drink on television is “sobering.”

Kristen and Katie aren’t friends anymore.  Katie says they haven’t been friends because Kristen blatantly lied to her face over and over about Jax.  But, she doesn’t have a problem with Jax because Jax didn’t lie to her and wasn’t supposed to be her best friend.

Kristen is still convinced that Ariana and Tom did more than just kiss in Vegas, and she flips out when she realizes they are holding hands during the reunion.  Lisa Vanderpump tells Kristen to “just zip it.”  Kristen thinks that the only reason Ariana even got to be on the show was because she was “f—-g her boyfriend.”  Stassi points out that Kristen slept with Tom’s best friend…twice, he is allowed to hook up with whoever he wants now that they are broken up.  Ariana announces that she doesn’t hate Kristen, but she thinks she is extremely hypocritical.  She thinks that Kristen was just using a “diversion tactic” by accusing her of sleeping with Tom so no one realized she was actually sleeping with Jax.  Tom points out that Kristen was “huffing and puffing” around the restaurant and screaming at Ariana and the way Ariana handled it as amazing.  Kristen is furious that Tom is taking Ariana’s side, she tells him to “go f—k himself,” and storms out of the reunion.

To Be Continued Next Week…