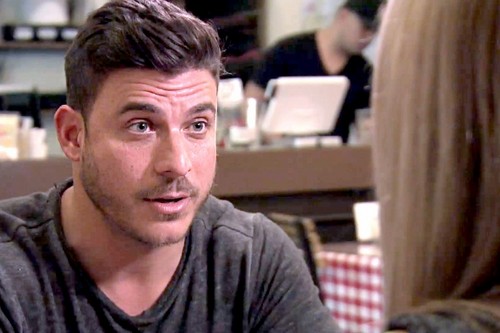 Tonight on Bravo VANDERPUMP RULES returns with a new Monday, November 10, season 3 episode 2 called, “All Fired Up.” On tonight’s episode, Lisa Vanderpump punishes the staffers for their behavior at Scheana Marie’s birthday bash. Also: Lisa anticipates her largest restaurant opening yet; Jax Taylor tries to choose between his two girlfriends; Stassi Schroeder tutors Tom Schwartz on how to charm Lisa.

On the last episode, Lisa Vanderpump still ruled over everything at SUR, but no longer ruled over Stassi, who returned from New York to find everything had changed between her and her former friends. Meanwhile, Jax prepared for plastic surgery, Scheana planned her perfect birthday party, and Tom Sandoval sparked a romance with Ariana, but all happiness was jeopardized when Kristen dug up a secret that would rock everyone. Did you watch the last episode? If you missed it, we have a full and detailed recap right here for you.

On tonight’s show as per the Bravo synopsis, “on the eve of her largest restaurant opening yet, Lisa must dole out harsh punishments to the SUR staff for their appalling behavior at Scheana’s birthday party. Jax tries to do the right thing by choosing between his two girlfriends, but finds honesty has its downfalls.Stassi coaches Tom Schwartz on how to charm Lisa into giving him a fair shot at his new job at PUMP.”

Tonight’s episode is going to be another drama packed one, which you won’t want to miss. So be sure to tune in for our live coverage of Bravos’ Vanderpump Rules Season 3 episode 2 — tonight at 10PM EST! While you wait for our recap, hit the comments and let us know how excited you are about the new episode of VR tonight.

Tonight’s episode of Vanderpump Rules kicks off at Scheana’s birthday party where Tom and James are arguing, Tom throws the first punch and it turns in to an all-out brawl, when the dust settles Tom is covered in bruises, Scheana has glass in her foot and has to go to the emergency room and get stitches.  Schwartz and Kristen are still screaming at each other because she punched him in the face when he was trying to break up the fight.

The next day Lisa is up bright and early with Eric to interview staff for her new restaurant pump.  She plans to bring in a few of her veteran employees from Sur, but she wants all fresh meat.  After a day of interviews she has an all new staff and has them try on their new uniforms.

Ariana wakes up and gets Tom some coffee and Ibuprofen, he lays in bed and whines that he got his ass kicked.  Ariana tries to talk to him about the rumors Kristen started about Tom cheating on her with a girl from Miami.  Tom insists the rumors are all ridiculous and explains that Kristen is crazy and vindictive and just is trying to break them up.  Tom gets up and gets ready for work and covers up all of his cuts and bruises with concealer.

Schwartz and Jax head to the tattoo parlor so that Jax can get the Stassi tattoo on his arm covered up.  He already got his new girlfriend Carmen’s name tattooed on his other arm.  Jax is dating another girl named Tiffany too, and Schwartz jokes that he should just get her name tattooed now so that they can save a trip.

Tom shows up to work at Sur, and James and Kristen are both working the same shift as him.  Jax tells him that Scheana was in the hospital until 6:00 AM getting her foot taken care of.  Tom admits that he was too drunk to text so he sent Scheana a video of him crying and apologizing for ruining her birthday.

Lisa arrives at Sur and corners Katie and wants to know what happened at Scheana’s birthday party, she heard that Schwartz was involved in the fight last night and she isn’t happy about it.  Schwartz was supposed to start working for her at Pump, but if he was throwing punches then she isn’t giving him the job.  Katie begs Lisa to hear Schwartz out and is sure there is an explanation.

Schwartz tells Stassi that Jax got her name covered up on his arm with a black rose.  She is ecstatic, she hated her name on his arm, and it grossed her out to think of him having sex with other girls with her name right there.  She says she is going to buy two bottles of wine tonight to celebrate.  Schwartz talks about the brawl at the party, and Stassi tells him he needs to go talk to Lisa if he still wants a job at Pump.  Schwartz confesses that he is “scared shitless” of Lisa Vanderpump.

Scheana shows up at Sur with Shay to eat dinner, Katie is shocked that she showed her face after the brawl last night.  James corners her and apologizes for what happens and blames it all on Tom.  Scheana doesn’t want to hear it, she says that she is taking a break from him and Kristen and all of their drama.

Stassi and Katie go apartment hunting, she wants to find a two bedroom and two bathroom for her and her boyfriend to start their lives together.  In the car Stassi brags to

Katie that her boyfriend is a rockstar in bed, and she is so happy that she upgraded and found someone that has his life together and she can trust.
Jax pays Tom a visit at his apartment where he is trying to clean up.  Jax vents to him about his two girlfriends, apparently Tiffany is going to be in town, and Carmen is mad.

Jax doesn’t know what to do because he likes both of them and he doesn’t want to dump Carmen or Tiffany.  Jax confesses that the reason he started dating Carmen was because Tiffany lives in Vegas and she isn’t around half of the time.

Jax leaves Tom’s to meet up with Tiffany for drinks, Jax fills her in on his relationship with Carmen.  He tells her that he doesn’t want to hurt Carmen, but he is going to dump her because he loves Tiffany and he can only think about her.

Lisa is trying to get Pump set up and Schwartz pays her a visit, she tells him that she wants to know what happened at Scheana’s party.  He explains that James and Tom were punching each other and he was just trying to pull Tom away.  Lisa is furious that they were fighting at her friend’s bar, she says she is going to call everyone in for a meeting.

Jax meets Carmen at a pizza place, and cuts right to the chase and tells her that he doesn’t want to hurt her or hold her back.  Carmen isn’t buying it, she says she never wants to see him again and he is full of it because just a day ago he was saying he wanted to have kids with her and tattooed her name on his arm.  She tells him that all he cares about is himself and he is 35 years old and needs to grow up.

Lisa holds a meeting with her Sur crew and rants to them about how pissed off she is about their brawl at Scheana’s birthday party and informs them that they are all trash.