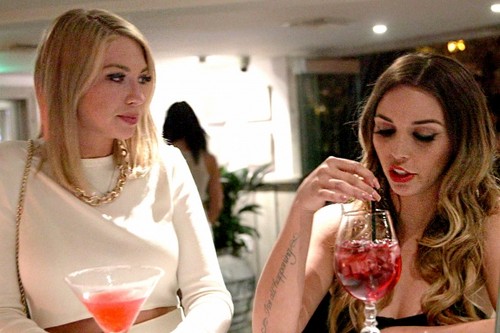 On the last episode, on the eve of her largest restaurant opening yet, Lisa had to dole out harsh punishments to the SUR staff for their appalling behavior at Scheana’s birthday party. Jax tried to do the right thing by choosing between his two girlfriends, but found honesty had its downfalls. Stassi coached Tom Schwartz on how to charm Lisa into giving him a fair shot at his new job at PUMP. Did you watch the last episode? If you missed it, we have a full and detailed recap right here for you.

On tonight’s show as per the Bravo’s synopsis, “after going over the budget and past schedule, Lisa struggles to make the grand opening of PUMP a huge success. Stassi confronts Scheana over her mean-spirited tweets, but Scheana maintains she only retweeted what someone else already said. Kristen seeks closure with Tom Sandoval, but watching Ariana take her place triggers her innermost feelings for her ex-boyfriend.”

Tonight’s episode is going to be another drama packed one, which you won’t want to miss. So be sure to tune in for our live coverage of Bravos’ Vanderpump Rules Season 3 episode 3 — tonight at 10PM EST! While you wait for our recap, hit the comments and let us know how excited you are about the new episode of VR tonight.

Tonight’s episode of Vanderpump Rules kicks off with Lisa’s team meeting, she is furious over the brawl at Scheana’s birthday party.  She announces that Kristen and Tom are both suspended, and James is officially fired.  After the meeting Lisa gets back to work opening her new restaurant Pump, she orders Scheana to get her shift covered at Sur and help out at the Pump opening tomorrow.

Outside James is furious that Lisa fired him, Kristen gives him a pep talk and assures him that it was all Tom’s fault.  Kristen thinks that if he talks to Lisa in private and writes her a nice apology note she will let him come back to work.

Stassi meets up with her dad for drinks and fills him in on all the latest drama.  She vents to him about how Scheana won’t stop harassing her and how stressful it is to be back and dealing with all of the drama.

Jax heads to therapy to vent about his latest love triangle with Carmen, she lectures him about his latest tattoo and tells him that he has a serious co-dependency issue.  He reveals that over time he wants to be friends with Stassi again and he reached out to her in an email.  His therapist thinks that he still has feelings for Stassi and he isn’t over her yet.

Kristen and James head out for drinks, he’s still upset over Lisa firing him.  She rants about Tom and is upset that she is still paying his car insurance and cable bills.  She doesn’t get why Ariana won’t handle his bills for him.  James tells her that she needs to go to his apartment and get the cable box and be done with him.

Tom and Schwartz head to the gym the next day and laugh at how funny it was when Lisa fired James in front of everyone.  Tom is excited about being suspended for two weeks because it’s like vacation from Kristen.  Tom brags about how much sex he has with Ariana, and Schwartz admits that he and Katie don’t have time to have sex anymore.

Stassi stops by Sur to grab a drink before the Pump opening, Katie fills her in on all the latest drama and Kristen and Tom getting suspended and James getting fired.  Katie and Peter head outside, and are shocked to see James pull up in his car and head inside after he was just fired.

The Pump grand opening looks like a big success, while Lisa is talking to the press Peter arrives.  Peter takes Ken aside and tells him that James just showed up at Sur for his shift and is working, Ken says that he is still fired and he needs to get off the property.  Lisa checks in on the bartenders and Schwartz reassures her that he is on his best behavior.

Stassi arrives at the grand opening and heads straight to the open bar.  Scheana corners her and tries to talk to her.  After some small talk they cut straight to the chase and start arguing.  Stassi says that she is tired of her talking crap about her on social media, and Scheana reminds her that she was making fun of her wedding and wouldn’t be in it.

Jax arrives at Sur and learns that Stassi was there, he admits that he wishes he seen her and wants to say hi and see how she is doing.  Kristina goes off on Jax and tells him that Stassi doesn’t want him to say hi to her and reminds him that he ruined her life and slept with her best friend.

Tom and Ariana head to the batting cages to hang out.  After Tom fails miserably at trying to hit the balls, he sits down with Ariana and explains that Kristen has been harassing him over the cable box.  He transferred it over to his name so he is paying the bills, but the box is still under her name and social security number.  Ariana tells him that it was the dumbest thing he could have done – he needs to cut all ties from Kristen because she is going to keep finding ways to interfere with his life.

Katie and Schwartz head to Stassi’s new apartment, she gives them a tour of the new place and jokes that the spare room is going to be either her boyfriend Patrick’s office, or a nursery.  She gushes that she is so in love with her new apartment, and her old apartment in LA had too many bad memories…like Jax.

James shows up at Sur, and begs Lisa to sit down with him.  She offers to have Peter come along, but James says that it is personal.  Lisa sits down with him, and reads her a letter that he wrote apologizing for his behavior and tells her how much his job means to him.  Lisa is impressed that he wrote a letter, he asks him to see it and tells him to get out so she can think about rehiring him.

Kristen stops by Tom’s apartment to pick up her stuff, and she is in tears seeing Ariana sitting there with Tom.  Tom whines that he has stuff saved on the DVR, but finally caves and unhooks the cable box.  Ariana sits there and awkwardly watches while Kristen cries that he moved on before she did and she just wants it to all be over.  Tom calls her out and says that he has moved on and they need to cut ties.  Tom packs her clothes up in to a bag and tries to ignore Kristen as she cries about how hateful he is being to her.  He hands her the bag and she sniffles and walks out and leaves their old apartment for the last time.