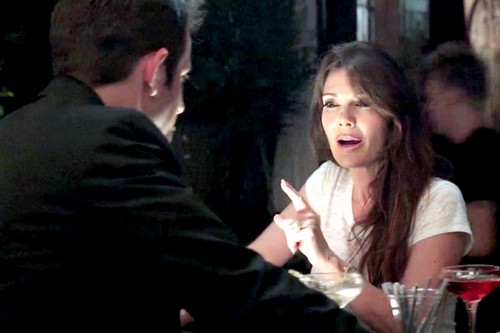 Tonight on Bravo VANDERPUMP RULES returns with a new Monday, November 24, season 3 episode 4 called, “Jax Nose Best,” and we have your weekly recap below. On tonight’s episode Stassi Schroeder reconnects with the SUR gang at a Hollywood bash, only to find her happy homecoming marred by Scheana Marie and Kristen Doute. Elsewhere, Jax Taylor endures a painful nose job, and panic strikes Tom Schwartz at his job at PUMP.

On the last episode, after going over the budget and past schedule, Lisa struggled to make the grand opening of PUMP a huge success. Stassi confronted Scheana over her mean-spirited tweets, but Scheana maintained she only retweeted what someone else already said. Kristen sought closure with Tom Sandoval, but watching Ariana take her place triggered her innermost feelings for her ex-boyfriend. Did you watch the last episode? If you missed it, we have a full and detailed recap right here for you.

On tonight’s show as per the Bravo synopsis, “Stassi reconnects with the SUR crowd at a Hollywood party, but Scheana and Kristenmake sure she doesn’t enjoy a happy homecoming. Jax learns who his real friends are when he undergoes a painful nose job. Tom Schwartz suffers a panic attack and runs out on his job at PUMP, infuriating both Katie and Lisa Vanderpump.”

Tonight’s episode is going to be another drama packed one, which you won’t want to miss. So be sure to tune in for our live coverage of Bravos’ Vanderpump Rules Season 3 episode 4 — tonight at 10PM EST! While you wait for our recap, hit the comments and let us know how excited you are about the new episode of VR tonight.

Jax is about to have surgery and so friends wanted to come together to celebrate the last day he’ll have his old nose. However their idea of celebrating is definitely a west coast thing. Sure they had a few beers but eye-brow threading is kind of considered a torture rather than a luxury.

And speaking of torture, Kristen has apparently stopped by her ex’s place because she “just wanted to collect the cable box”. Though she showed up at his and Ariana’s place all decked out. Pretty part dress and all. Also if her attire alone wasn’t suspicious enough – Kristen also used the time she was at his place to cry on Tom’s shoulder for close to an hour.

Tom was very gentlemanly about it. He let Kristen cry it out without ever complaining and that ended up upsetting his girlfriend. Ariana was extremely ticked off by Kristen’s display. She felt it was both inappropriate and disrespectful of someone else’s relationship. In fact Ariana was so upset she even turned to Stassi as a confident. Stassi doesn’t like Kristen so she was the perfect person to vent to. Both women can easily see Kristen’s flaws so they had no problem blaming the entire cable box incident on her. And not Ariana’s boyfriend who really should have set boundaries.

Yet Stassi had some other things to say as well. She didn’t like Kristen but she felt Ariana should also be upset with her friend Scheana. Scheana was the one that recently got a matching tattoo with Kristen. So it’s time Scheana stopped trying to be everyone’s friend (minus Stassi) and pick a side in the Ariana/Kristen fight.

Although Stassi, as it turns out, was full of advice. Katie had gone to her after Schwartz had an incident at the restaurant. Katie had gotten her boyfriend a job after begging Lisa for a chance and Schwartz was barely there for a few hours before he claimed to have experienced a panic attack. It seems the fast pace of being a bartender at a popular restaurant was just too much for him. So he told his boss he had to go home and then tried to tell Katie the job was stressing him out.

Schwartz was probably expecting some sympathy but Katie didn’t have any in her. She was actually ashamed of her boyfriend. He hasn’t a real job in the last six years and the one opportunity she managed to get for him – he screwed up. So Katie was envious of the boyfriend Stassi had. Stassi had a real man to come home too.

After Jaz had his surgery, Schwartz volunteered to look after him. But Lisa showed up at Jax’s pace to see how he was doing. And she ran into Schwartz there.

Schwartz of course tried to make excuses. Yet, ultimately, Lisa didn’t want to be bothered. She’s tired of excuses. And if he needed someone to tell him that then he should have asked James. James has apologized over and over again. Plus his parents know Lisa and Ken which generally should have guaranteed him his job back. But did that matter? It didn’t at first. Though Lisa did end up changing her mind about him.

She finally allowed James his job back when he literally tried to beg for it from an alleyway. Schwartz on the other hand has only come with crap about how much he respects Lisa. But he hasn’t called up or shown up to make an apology. The first time Lisa had seen him after he had walked out was at Jax’s where she caught him unaware.

He never once made contact in the time in between the two incidents. And so Katie is now questioning whether or not Schwartz can be an adult. She was there when James won his job back and she can’t understand why Schwartz hadn’t tried to do the same.

Then when Schwartz did make the effort – it was half-hearted. He simply said sorry then handed over his shirts from the job.

Later everyone. Literally everyone, showed up at an OK Magazine event. Stassi, Katie, and Schwartz were on one side and Tom, Kristen, Scheana, and loved ones on the other. Truthfully, it was an awkward set-up. Especially after Kristen had talked to her boyfriend James about the cable box incident. And in her version of events, Ariana had been rude to her. She felt Ariana should have removed herself from the situation and gone off while Kristen was talking to Tom. So there was some tension with having everyone on one place.

Tom and Ariana left their table to go join Stassi’s but the drama eventually followed them. Stassi had said hi to Scheana and Scheana thought she should return the favor by coming over to their table with Kristen in tow.

So, yes, Kristen brought drama. Though thine time she didn’t start it. Stassi was angry at Scheana for befriending Kristen and she finally let the other woman know. But, before Scheana could defend herself, Stassi held a dramatic walkout where she left the party with her posse following close behind her.