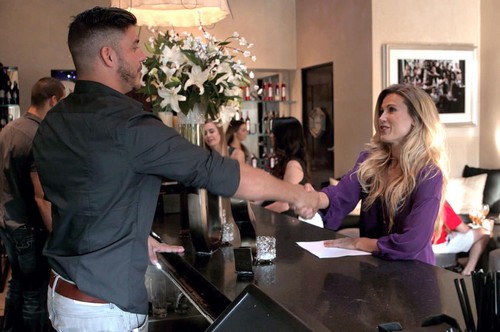 Tonight on Bravo Vanderpump Rules returns with a new Monday December 15, season 3 episode 7 called, “New Girls, Old Grudges,” and we have your weekly recap below. On tonight’s episode with Gay Pride coming up, Lisa Vanderpump hires a new hostess named Vail, who immediately catches the attention of Jax

On the last episode, Kristen revealed that Tom Schwartz may be cheating on Katie. Katie interrogated the SUR staff about Schwartz’s infidelity and discovered they know more than expected. Lisa hosted the “50 Gay Mayors” event at PUMP. Did you watch the last episode? If you missed it, we have a full and detailed recap right here for you.

On tonight’s show as per the Bravo synopsis, “With Gay Pride coming up, Lisa hires a new hostess named Vail, who immediately catches the attention of Jax. Stassi slams Tom Schwartz for remaining friends with Jax, but Schwartz believes her anger is just a grudge against her ex-boyfriend. James feels the strain of Kristen’s ongoing obsession with Tom and Ariana.”

Tonight’s episode is going to be another drama packed one, which you won’t want to miss. So be sure to tune in for our live coverage of Bravos’ Vanderpump Rules Season 3 episode 7 — tonight at 10PM EST! While you wait for our recap, hit the comments and let us know how excited you are about the new episode of VR tonight.

Stassi, Katie and Kristina are at Stassi’s house discussing the situation with Tom. Katie tells them that she asked him everything she needed to know and nothing more. She adds that a lot of the things he admitted were hard to hear, including the fact that there have been periods in their relationship when he was very unhappy and questioning it. Tom then bursts in with flowers, and as soon as Stassi confronts him for cheating on Katie, he says he isn’t here to talk about that, just to drop off some flowers. Stassi keeps berating him and Kristina jumps in, asking who would cheat on someone as awesome as Katie. Tom jokes that he guesses he does, and Stassi tells him he isn’t allowed to make jokes right now. Stassi tells him to leave the apartment and he complies, which makes Katie mad. She says if he really had something to say, he should have stayed. She says that he definitely has some growing up to do.

A new hostess comes into SUR, whom Jax is immediately attracted to, saying he will definitely sleep with her. She interviews with Lisa, who thinks she seems perfect for the job, but not everything that glitters is gold.

Katie and Tom go out on a fancy dinner date.

Tom says although they’ve been through hell the last few days, but there is a silver lining in the fact he will learn to appreciate her more. Katie tells him she can get over his infidelity, though it will hurt. However, she hates Jax and tells him she prefers he doesn’t see Jax. Tom says that isn’t feasible because they hang out in the same circles and he will bump into him anyway. He tells her Jax thought he was unhappy in the relationship, and that’s why he was trying to break it up.  She asks him at least not to hang out with Jax alone, saying she’s being really reasonable.

Today is the gay pride event at PUMP.  While getting ready, Jax flirts with the new girl, saying he may even be a borderline asshole.  At the bar, Stassi confronts Tom on his cheating yet again. Tom thinks Stassi is a good friend, but isn’t sure if she has Katie’s best interests in mind. He suspects she has her own interests in mind.

Meanwhile at SUR, the hostesses are complaining about how dead it is. “Why would you start a business down the street from your other business?” one of them says.

Stassi comes to SUR to see Katie. She makes a point to avoid Jax. Jax is bored at SUR, and goes over to PUMP to check on Tom.  He asks Tom if everything is okay, and Tom says, “because of you, my life is literally a living hell.” Tom complains to Jax that now he’s on a short leash and won’t even be able to check out other girls.

Kristen confronts Ariana, who still denies she banged her ex-boyfriend when they were together. Kristen then says she’s just as much of a liar as he is. She says this week she is going to go to his house, and when she needs to talk to him about bills, she isn’t trying to hook up with him.

Stassi is introduced to Vail and realizes she has seen her before. She is surprised that she just took a hosting job at SUR, as she had thought Vail was a glamorous jet setter. Scheana is annoyed by Stassi’s pretentious attitude, saying she doesn’t understand why she thinks she’s better than everyone who works at SUR when she keeps coming around and used to work there.

James asks Kristen if Tom knows she is coming over to get her stuff, and she says she hopes “his shadow” isn’t going to be there. Tom asks why she even cares, telling her to get over it and get her stuff and get out. He asks how many more time she’ll need to go over to his house to get stuff, considering this is the third or fourth time she has gone for this reason. He says he realizes she still has to deal with him, but he wonders when this going over thing is going to stop.

Kristen arrives and the two Toms are there. Her ex points her to her stuff. He says she shouldn’t be getting any of her mail at his house as she hasn’t lived there in six months.  He thinks that she is obviously trying to look good around him, but it is incredibly transparent.  He tells her not to go and talk crap to Ariana. He confronts her for saying their relationship is built on lies. She accidentally calls him babe, and then says she is telling him from a place of love that when things start off badly and dishonestly, they aren’t going to end well, and they know that. She then says that’s how he and Ariana started their relationship, which he denies. He then says she was banging Jax on their couch while he was in the house.

She says she wants him to be happy, and he says that she should then stay out of his relationship.  She asks why she would stay with her for six years if their relationship was hell, and he says it’s because he felt trapped with her. He says he doesn’t want to be around her. Crying, she says they don’t have to talk anymore and clearly have nothing left to talk about. Then, she storms out.

Ariana arrives and they update her on what happened.  “The last time Kristen came over, she took one look at me and started bawling her eyes out,” she says. “I don’t need to be here for that.”

Tom Schwartz says he wants Katie to call Kristen out for spreading rumors about his relationship.

Vail is late for work, and Laura starts asking her questions to see if she is a risk to breaking any more rules. She asks Vail if she drinks, and she says yes, but that she stops drinking for extended periods of time. She talks about how she was on The Young and the Restless for a few years, and got stuck into the show business lifestyle, partying and drinking. Laura warns her about Jax, telling her that she doesn’t want staff members dating each other.

Stassi, Katie and Kristine are decorating a gold ombre cake for Peter, “because that’s the cake I wanna eat,” Stassi says. Stassi says she is sick of everyone making excuses for the group of people doing terrible things and making eachother feel better about it.  Katie tells them about her dinner date with Schwartz, saying she doesn’t want to be the ultimatum boyfriend and that he knows what Jax did was wrong.

Stassi asks Tom why he wants to be friends with someone when he’s witnessed everything he’s done. She says he should never let anyone talk about his girlfriend like that, and he says he has dealt with it but he won’t stop being friends with Jax. Stassi says that’s the best thing he could possibly do. She asks him what more he has to do or how serious it has to get for him to want to stop being friends with Jax. Tom tells her she needs to let it go. “He should be exiled,” Stassi says.