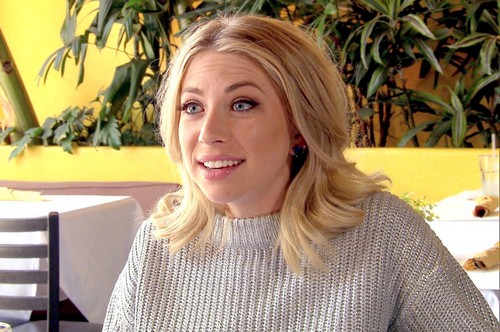 Tonight on Bravo Vanderpump Rules returns with a new Monday December 8, season 3 episode 6 called, “Kiss and Tell,” and we have your weekly recap below. On tonight’s episode Kristen Doute reveals that Tom Schwartz may be cheating on Katie Maloney.

On the last episode, Kristen and Tom Sandoval returned to SUR after their suspensions. Tom Schwartz adopted a puppy to delay marriage talks with Katie, but their relationship was tested when Jax spreaded rumors that Katie cheated. And Lisa gave Stassi a special opportunity to style her for a cover photo shoot, which ended up with both women feeling under-appreciated by the other. Did you watch the last episode? If you missed it, we have a full and detailed recap right here for you.

On tonight’s show as per the Bravo synopsis, “Kristen reveals that Tom Schwartz may be cheating on Katie. Katie interrogates the SUR staff about Schwartz’s infidelity and discovers they know more than expected. Lisa hosts the “50 Gay Mayors” event at PUMP.”

Tonight’s episode is going to be another drama packed one, which you won’t want to miss. So be sure to tune in for our live coverage of Bravos’ Vanderpump Rules Season 3 episode 6 — tonight at 10PM EST! While you wait for our recap, hit the comments and let us know how excited you are about the new episode of VR tonight.

Stassi comes over to Katie and Tom’s house to find Katie doing Tom’s hair. Tom tells her that needs to bartend Sunday at SUR to help them for an event. He is surprised that he has been asked back, even for one night, after his previous panic attack.

Kristen thinks that if it weren’t for Stassi, she and Katie would be in a better place.  She wants to have a conversation with Stassi to tell her that although they’ll never be friends, they should still be chill.

Laura is hosting a party where 50 gay mayors will come together. She needs all the help she can get for the event, and she asks her bartenders to pass trays. They complain because they find tray passing “mindless work,” “demoralizing,” and “bottom of the barrel.”

Stassi and Kristen meet up for drinks. Kristen welcomes Stassi back to LA. Kristen tells her that the intentions of her previous affair with Jax were not malicious and that she wanted to take that to the grave. She apologizes, and Stassi thanks her.

Stassi brings up the rumor that Kristen is trying to bring Tom and Katie down, and Kristen tells Stassi, “I know that Schwartz cheated on Katie, with two different people, for sure.”

She says she isn’t going out of her way to ruin anyone’s life, but she was “exiled and quarantined” for behavior that everyone participates in. She says Jax’s girlfriend says Schwartz slept with her friend in Vegas, and Sheena also says he made out with her friend.

Jax meets his therapist. He tells her that he watched The Green Mile, which made him cry because one of the characters was a tough guy on the outside but kind on the inside. She tells him he is more of a man because he allows himself to go to those deeper places.  He confides that he saw Schwartz’s girlfriend cheat on him, and he was obligated to say something about it. When Katie was confronted, she attacked him, which made him upset. His therapist tells him to analyze the situations that make him angry.

Stassi and Katie meet up and talk about the meeting. Stassi tells Katie about the cheating rumors, and Katie says Tom would never sleep with that woman in Vegas. Stassi agrees, saying that the sources of the rumors are untrustworthy. Katie says she knows everything about Tom and they don’t lie to or cheat on one another.

Stassi asks Katie if she is okay with Tom being friends with Jax and Sheena. Katie says she needs to confront them about the rumors and find out what they really said.

Kristen comes up to Jax and talks to him about Katie claiming that she is out to get them, and she says he needs to own the fact that he claimed Tom cheated on Katie, but he says he didn’t say that. Jax says he would love nothing more than for Tom to “rail a girl right in front of her.” Kristen repeats that he needs to own what he said.

Katie takes him outside and confronts him about the rumor. He claims again that he didn’t say that. Katie asks why she would say that then, and he says she needs to take it up with Kristen, someone who actually enjoys meddling in people’s lives. He suggests she may be lying, possibly because of her friendship with Stassi.  She asks him if Tom cheated on her in Vegas, and he says no.

She goes back to Kristen, and she says Katie needs to stop saying she is trying to bring them down. She tells Katie what Jax said at the bar about  how he would love nothing more than to see Tom rail a girl right in front of her.

Kristen tells Katie that she thinks Tom is a really good guy, but she believes he cheated on her. Katie says it isn’t any of her business.

Tom arrives, and Katie updates him. He immediately admits to the rumor about making out with someone, saying it was over a year ago and after one of their huge fights. He tells her the girl’s name is Kate. He says he was drunk and doesn’t lust after other girls. She asks if he did this in public, and he reiterates he was drunk. She starts crying, saying he doesn’t even kiss her in public, and he says he’s been getting better about that.

“I’m not a cheater,” he says. “But you are,” she answers.  She asks him why she would have friends like Jax around him and that she wants them out of her life. He says he’s going to talk to Jax.

Jax comes outside and sees the couple, immediately knowing something is about to go down. She confronts Jax about his comment that he made at the bar to Kristen, and he says he doesn’t know what he is thinking. She tells him to go back to therapy, saying that she hates him. He says he hates her more than life, telling her to cry some more.  Jax thinks Tom would have more fun if he were single.

Tom and Jax meet alone, and Jax admits to starting the Vegas rumor. “She is a bad person, man,” he says. He adds that he took matters in his own hands, and that these women just drive him crazy.  Tom says he can’t disrespect his relationship while he’s sitting right there with Katie, and now he looks like a jerk for remaining friends with him.

At Stassi’s house, Stassi tells Katie that Jax shouldn’t be fighting with girls. She is surprised about Tom’s behavior, saying it’s almost an insult to compare him to Jax and Kristen but her radar was off.

Katie says it was hard to hear that there have been periods in their relationship where he was unhappy. She says she isn’t asking him to get married, but she wants to know if he can see himself getting married to her. She says he said yes, but she still needs to know the extent of his commitment.

Stassi and Chrisley from Chrisley Knows Best are the guests.

Stassi says she finds it weird that Tom is still friends with Jax, wondering if “some kind of weird protection thing is going on.” Stassi says she is embarrassed that she is still tied to Jax. Andy asks her about her new boyfriend, who looks a lot like Jax, but she denies it.

A caller asks Stassi how she feels about Jax’s new nose, and she says she really hopes he can breathe better. Andy asks if she believes he really had a deviated septum, and she says “come on.”

Stassi says her new boyfriend, Patrick, isn’t on the show because he’s a man and she couldn’t see him on there doing what those boys are doing.

A caller asks Stassi if she is making any money with her styling or if she has a job. Stassi says she is coming out with a jewelry line full of statement necklaces.

A viewer asks her why Stassi would criticize for bullying because she herself is a bigger bully than anyone, and she thanks them for the compliment.

A caller asks Stassi about Tom’s bartending skills and panic attack. She says he gave her so much crap about working at Sur, but he couldn’t even bartend for 15 minutes, so she gave him crap but she loves him.

Stassi is asked what she learned from her relationship with Jax, and she says she learned exactly what she wants and doesn’t want, and that she is happy with the experience because she got the best man ever out of it. “Who looks like Jax,” Chrisley says.

A caller asks Stassi what is up with her dress, saying she looks like an old lady. Andy remarks that Stassi’s style has gotten more mature over time, and she describes her style as “granny chic.”

Stassi is asked what her favorite insult ever told on the show was, and she says when she threatened to skin someone alive.

The viewer poll of the day is whether or not Katie and Tom should break up. Yes: 47%, No 53%. Stassi says she’s happy about those results.