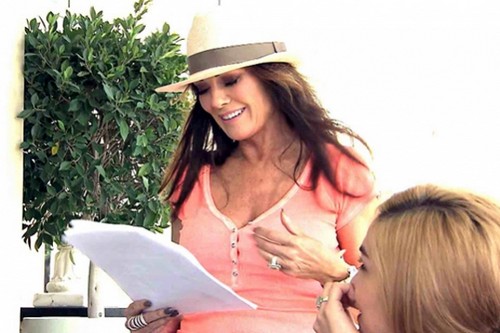 Tonight on Bravo VANDERPUMP RULES continues with a new episode called, “Secrets Revealed.”   On tonight’s episode Uncover unseen #PumpRules moments including Jax’s secret gf, Tom’s darkest fantasy, an insight into Lisa’s sex life. Did you watch last week’s show?  We did and we recapped it right here for you.

On last week’s episode the SUR staff opened up to Andy Cohen about why Kristen slept with Jax, why Jax had no remorse towards his old friend Tom, and whether Stassi could overcome the hurt and betrayal. Nothing had been the same since the explosive finale, and Lisa revealed how she’s been keeping it together at SUR, where old friendships and couples have split, and as always new, even more controversial alliances and romances had taken their place.

On tonight’s episode Vanderpump Rules: Secrets Revealed” serves up never-before-seen moments, as Andy Cohen visits Lisa Vanderpump and SUR to discuss the most revealing, embarrassing, and hilarious scenes you didn’t see this season. Stassi attacks Jax for claiming he’s “in a relationship” with a girl he’s never met; frozen vodka helps Scheana reveal how she really feels about Stassi, Katie and Kristen; Tom reveals his darkest fantasy about seeing Kristen with another man; Katie shows Schwartz what half a bikini wax looks like; and Lisa accidentally reveals too much about her sex life.

Tonight’s episode is going to be another drama packed one, which you won’t want to miss. So be sure to tune in for our live coverage of Bravos’ Vanderpump Rules “Secrets Revealed” — tonight at 10PM EST! While you wait for our recap, hit the comments and let us know how excited you are about the new episode of VR tonight.

Tonight on a special episode of Vanderpump Rules Andy Cohen and the cast of Pump Rules share unaired scenes of Season 2 and secrets that were never revealed before.

First the stars reveal what they do “to look good” and keep up in Los Angeles.  Scheana and Ariana actually went into a chamber that was negative 230 degrees, because the salon told them that it would boost their metabolism and burn more calories.  Stassi, Katie, and Tom all get waxed.  Jax follows a strict supplement diet and works out six days a week.  Peter even helped Jax shoot his own workout video.

Up next they discuss whether or not Jax will “ever settle down.”  In an unaired clip Stassi, Katie, and Kristina call Jax out and ask him why he changed his relationship to status to “in a relationship.”  In another scene Stassi reads all of the sad desperate text messages the received from Jax to Scheana.

In another unaired scene Lisa has to spend an hour reading her Sur team the rules of the Gay Pride Parade.  Apparently there is a dress code and strict guidelines for float riders.

Later they discuss their trip to Mexico for Stassi’s birthday, and Tom points out how crucial it is to have a good passport photo.  You have the same passport photo for ten years.  To prep for his passport photo, Tom and Schwartz went tanning.  When they arrived at the office to have their photos taken for their passports, Tom even put on makeup and concealer.

We also get to see an unaired scene featuring Tom and Jax discussing cheating, before either of them actually admitted they cheated.  Ironically, Tom confesses to Jax that he thinks he would like to watch Kristen hook up with another girl.

There are also never-aired scenes that were recorded at Stassi’s Mom’s lakehouse.  Jax drew penises all over Tom’s face while he was asleep and then forced him to come eat breakfast with Stassi’s Mom covered in markers.

Up next on the unaired Vanderpump scenes, Andy shows us clips of Stassi trying to waitress with a demon eye.  She used one of Scheana’s eye-drops in her eye, and it dilated her pupil to double the size of her other eye.

Andy also shares a clip of a heated competition between the Sur bartenders.  Tom is annoyed because the other bartenders are making drinks wrong, and then when Tom makes them they didn’t taste the same.  Lisa has all of the bartenders prepare her a cosmo, to see which is correct.  Lisa realizes that Jax has no idea what he is doing.  Lisa tastes the cosmos and declares that Ariana’s cocktail is the best, and Jax definitely needs some training.  Lisa also shares clips of her discussing the Sur’s servers’ etiquette at work.

Overall there were some pretty funny clips tonight, but Andy Cohen definitely didn’t deliver on “revealing Vanderpump Rules secrets” like he promised.