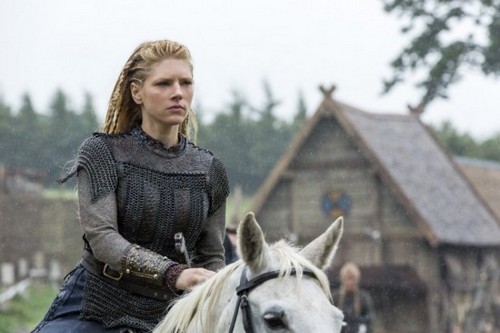 Tonight on the History Channel VIKINGS continues with another episode called, “Answers in Blood.”  In it Lagertha and Ragnar unite to battle Jarl Borg. Later, Bjorn makes a difficult choice.

If you have not watch the show the show follows the adventures of Ragnar Lothbrok, an actual historical figure, and the greatest hero of his age. The series tells the gripping sagas of Ragnar’s band of Viking brothers and his family, as he rises to become King of the Viking tribes. As well as being a fearless warrior, Ragnar embodies the Norse traditions of devotion to the gods – legend has it that he was a direct descendent of Odin, the god of war and warriors.

On tonight’s episode Lagertha and Ragnar unite once again and together fight to win Kattegat back from Jarl Borg. Aslaug must face the truth of her prophecies. Athelstan struggles to define his faith. Bjorn must once again make a choice.  Expect many important things to happen in this episode.

Tonight’s episode looks like it is going to be great and you won’t want to miss it, so be sure to tune in for our live coverage of The History Channel “Vikings” at 10:00 PM EST! While you wait for our recap hit the comments and let us know how excited you are for the season 2 episode 5 of Vikings tonight.

RECAP: Lagertha enters a longhouse and speaks to Rollo; with her she’s brought her son who still can’t grow a beard. Rollo and her son hug. Lagertha sees Siggy and hugs her, Siggy looks behind her to show a woman. It’s the princess, Lagertha is happy to see more of the princess’s sons. Lagertha asks to take a look at the baby and hold it; the princess lets her and tells her that he’s named after her father. Ragnar enters and tells them enough with the pleasantries and that they need to make a plan, the enemy has no idea that they’ve been reinforced. They’re plan is to affect the enemies food supplies, Lagertha’s son offers himself to go and complete this task. It cuts to person cloaked covering herself she’s apparently a nun and can’t show herself to any man, she’s in front of the King and he wants to see her face because he believes he’s not any man. The woman reveals her face and it’s injured, turns out her husband did it due to him suspecting her to be unfaithful. The king asks the woman if she was unfaithful and she tells him no, the King tells her that he believes that her that she’s not lying and won’t allow her to be branded in public. Ragnar and his company are sneaking into the enemy’s base, he’s going to make a distraction in order to lead the guards away and create an opportunity for them. Ragnar tells them not to be afraid of death, to embrace it. Two of the company create a distraction for both Ragnar and Bjorn; they blow a horn to catch the guard’s attention. Ragnar begins his invasion by throwing an axe into a guards head, allowing for him and Bjorn to sneak inside unnoticed. One person of the company with Bjorn and Ragnar end up dying, he is bitten to death by dogs. Ragnar and Bjorn are still being stealthy; Bjorn takes out a guard by choking him to death without making a sound. Ragnar and Bjorn are successful with making it to the enemies food supply; they begin to try starting a fire. The other man of the company shows up alive to help Bjorn and Ragnar with lighting their food supply on fire; they successfully complete their task and make it out alive.

Jarl Borg isn’t pleased with their Winter food supply being destroyed, he sets out on horseback witch a bunch of soldiers by his side to search for who did this; they end up meeting face to face with Ragnar who’s with his allies and fellow soldiers. They begin to fight with each other, the enemy are getting completely slaughtered by Ragnar and Bjorn. During the fight Rollo saves Lagertha at the last second. Ragnar has his eyes set on Jarl Borg who’s in the fight. Ragnar is making his way to Jarl Borg, wanting to kill him once and for all; but he keeps getting interrupted by the enemy soldiers. Ragnar throws his hatchet and ends up striking Jarl Borg, but not killing him. Jarl Borg ends up escaping with what’s left of his men.

Ragnar and comrades arrive back to their settlement, the people there are glad to see them back and alive after their fight with Jarl Borg. Princess Aslaug keeps eyeing Lagertha, as if there’s something she knows about her that no one else does. Athelstan speaks to a man who’s now a pagan, he tells him to not speak to those higher than him if he values his soul. The pagan ends up seeing the woman he helped before, the one who was a nun and was beat by her husband. She thanks him for what he did and kisses him on the cheek, then walks away. Rollo has a prisoner that they took back after the fight with Jarl Borg; he’s got the entire settlement watching. He’s going to decapitate him with an axe; Ragnar stops him and wants Bjorn to decapitate the man instead. Bjorn sacrifices the man to the gods by decapitating him; Floki wipes the man’s blood on his face and looks happy. Lagertha keeps eyeing Ragnar; she doesn’t seem pleased with what he did with making Bjorn sacrifice the man. Ragnar talks to the Seer saying he loves two women, and that he doesn’t want to choose between them. The Seer tells Ragnar a story, about a woman who could choose a husband, but she could only choose him by his feet. The woman ended up choosing the feet she thought looked the nicest and thought it was the most handsome of the men, turns out that it was the god Nord who was old. Ragnar stops him and says that he doesn’t want to choose one; the Seer tells Ragnar that he should decide by their heart and not by appearance. King Ecbert is in a church, the pagan man is seeing visions of people being sacrificed during the entire ceremony.

It begins to rain over Ragnar’s settlement, while eating the princess sits next to him to talk; he mentions how it’s nice to see all the children to play together. She then says that she’s bearing him another son, but is worry about the prophecy. She then brings up about what he’s going to do with Lagertha; he tells her that he will not tell Lagertha to go if she does not want to. Ragnar then admits to the princess that he wants both her and Lagertha to stay; he shows her he loves her by kissing her. Ragnar heads on over to the house Lagertha is staying at, he’s come to talk to her and asks to be alone. Rollo leaves them alone to give them their privacy. Ragnar wants to know what she’s going to do; she has no idea of what to do because Bjorn is very happy staying in the settlement. Ragnar tells her that they should both stay; Lagertha says that his wife would not be happy if she does stay. Siggy believes that Ragnar loves Lagertha still and thinks that Rollo also does. It cuts to the pagan man who’s now asking for God’s help, he wants God to show himself before himself; while praying for God to show himself, a weird creature is inside of the room roaming around. The pagan man finds a monster underneath his bed; he believes that it’s a devil of some sort; when he checks the bed again the monster is nowhere to be found.

Ragnar is visited by a man, he is given bad news; he asks about what has happened to Athelstan, but the man has no news of what’s happened to him. Lagertha tells Ragnar that she’s come to a decision, that she is aware that Bjorn wants to stay here with his father and she really can’t blame him. She gives her permission to let Bjorn remain in the settlement with Ragnar; she has decided that she will go back to her husband. Lagertha wants to leave her son in their hands; she wants Ragnar to look after him because he’s all she has left. Lagertha walks away and Bjorn follows. Lagertha is getting her horse ready, princess Aslaug thanks Lagertha for what she’s doing, and they end up hugging. Lagertha gets on her horse and leaves.