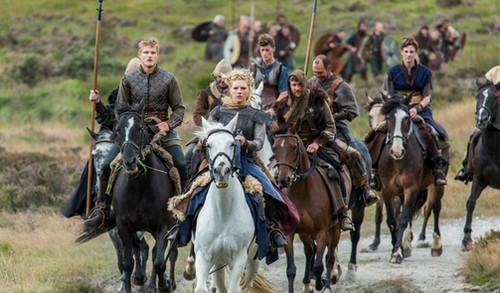 Tonight on the History Channel VIKINGS continues with another episode called, “Unforgiven.”  In it King Horik presents a surprising proposition to Ragnar; Athelstan becomes confidant to King Ecbert.

On last week’s episode Lagertha and Ragnar united once again and together fight to win Kattegat back from Jarl Borg. Aslaug had to face the truth of her prophecies. Athelstan struggled to define his faith. Bjorn had to once again make a choice.  Many important things to happen in this episode.  Did you watch last week’s episode?  We dd and we recapped it right here for you.

Tonight’s episode looks like it is going to be great and you won’t want to miss it, so be sure to tune in for our live coverage of The History Channel “Vikings” at 10:00 PM EST! While you wait for our recap hit the comments and let us know how excited you are for the season 2 episode 6 of Vikings tonight.

On tonight’s episode of The History Channel’s series Vikings, Lagertha returned home to her drunk and abusive husband. He accused her of still being in love with Ragnar and then tells her to sleep alone because he made other arrangements. After he leaves, he sends a group of men to beat Lagertha up and leave her barely conscious.

Bjorn meets a servant girl and he appears interested in her. She tells him that she had a boyfriend, and then excuses herself to finish her work. Ragnar watches Bjorn get turned down form his tent.

In Scandinavia Rollo pays Jarl Borg a visit, and gets to meet the skull of Borg’s first wife. Rollo reveals his brother wants to rebuild the alliance he once had with Borg, Rollo tells Borg Ragnar doesn’t want revenge, he wants Borg’s men to help his men raid.

The servants are having a dance party, they are all gathered around the girl that Bjorn spoke to earlier and clapping as she dances around like a mad woman. Bjorn joins the party and watches the servant girl, obviously intrigued by her.

While Athlestan is writing he begins having visions of blood running down his face on to his paper. Ecbert summons for him, and he snaps out of it. Ecbert shows Athlestan scrolls of paper from Rome and tells him that the stories are about Gods, Ceasarian times, empires, and dreams. Ecbert opens the scroll and reveals to Ecbert that he can read them. Ecbert tells Athlestan he has chosen him to be the “guardian of the books,” he wants him to make copies of them. He threatens Athlestan that if he ever tells anyone about htem he will crucify them.

Rollo and Jarl Borg arrive via boat, as they are reaching land Jarl Borg tells Rollo he “hopes he told him the truth.” Jarl Borg sits down with Ragnar and pledges his loyalty to him and promises to help him fight for their common cause. Jarl Borg promises him that they have “much to gain” if they work together. Ragnar thanks Jarl borg. King Horik confesses to Siggy that he is shocked that Ragnar took his advice. Siggy tells King Horik that Ragnar always does the opposite of what you expect him to do.

A badly beaten Lagertha sits down to dinner with her crazy husband and all of his people. He stands up and announces that Lagertha has “the most beautiful breasts in the world.” He tries to rip her shirt open and expose her breasts to everyone but Lagertha spins around unexpectedly and stabs him in his eye.

Siggy tries to sit with Rollo, but he grabs his axe and storms outside. She asks where he is going and he gives her a strange look before he slams the door. Jarl Borg is lying in bed having visions of Eagles and men in cloaks, he is convinced someone is in the room with him. Meanwhile Rollo and his men are burning down the barn where Jarl Borg’s army is spending the night.

While all hell is breaking loose outside, Bjorn is putting the servant girl to bed in his room. She tells him she can’t sleep at his house. Bjorn doesn’t want to order her to stay here, he wants her to choose to stay there. She takes off her dress and asks him “is this what you want?”

Rollo barges into Jarl Borg’s cabin and sits on his bed next to his pregnant wife and watches while his men brutally beat Jarl Borg. They bring half-dead Jarl Borg back to Ragnar’s house and drop him in a heap on his floor. King Horik asks Ragnar why he did this, Horik thought they were forming an alliance, and Ragnar explained there was no way he wasn’t going to seek revenge on someone who threatened his family. Horik obviously thinks what they have done is wrong, but there isn’t much he can do about it, it is pretty clear that Ragnar is the one calling the shots.