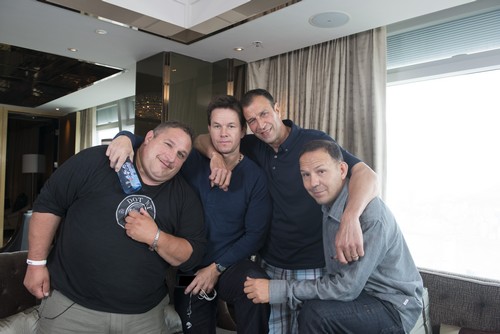 Wahlburgers airs tonight on A&E with second episode of season 2. On tonight’s episode called, “The Great Wahlberg of China,” Johnny and Henry tag along when Mark travels to Hong Kong to promote a film.

On the last episode, when Donnie asked Paul to join a fantasy football league, Paul decided to enlist the help of New England Patriots’ Rob Gronkowski. In return, Paul gave “Gronk’ a cooking lesson to prepare for an important family meal. In LA, Mark took Drama to the dentist to take his teeth, and his acting career to the next level. And when Alma got a new smartphone, she quickly became addicted to a host of new apps. Did you watch the last episode? We recapped it all right here for you.

On tonight’s episode Mark is in Hong Kong to promote his film and Johnny “Drama” and Henry “Nacho” are along for the ride. During their stay Mark sends “Drama” to a casting agency to audition for a local commercial. Meanwhile, “Nacho” uses his stomach of steel to sample local delicacies and a scouts out a new location for a future Wahlburgers restaurant.

Mark, Nacho, and Johnny board the place and head to China. En route to Asia Mark reveals to Johnny that he got him an audition in China. Johnny thinks it is another set-up, Mark reassures him that it is the “real deal” this time.

They arrive at the premiere, and Mark let Nacho and Johnny walk the red carpet with him and make a fool of themselves. Afterwards they head back to the hotel for dinner. Mark tells Nacho it is his job to sample all of the local cuisine in case they need to incorporate it in to their Chinese menu. After dinner Johnny and Nacho head out to find a Chinese fortune teller. They sit down in the tent and Johnny learns that the man’s pet bird will pick his fortune out of a stack of cards for him. Johnny asks the bird how is audition will go, the bird finally picks his fortune. He learns that he will be successful in the future, but it will take him a long time and a lot of work to get there. They tell him that if he finds a black thousand year old egg and eat it, it will speed up his fortune.

Johnny and Nacho head out at night to explore Hong Kong with Mark’s assistant Hamster. Mark told them to “immerse themselves in culture,” so they hit up all of the street vendors and try all of the food. They video tape themselves eating mystery meat so that they can show Mark.

They head back to the hotel room and show Mark videos of that they have been doing all day. They recorded themselves getting their fortune read, eating mystery meet and black eggs, and wearing their “kitty cat shirts.” Mark gags when he sees the video clip of Nacho eating the black eggs from the street vendor.

It’s time for Johnny’s audition, he heads to the address that Mark gave him, and Johnny is surprised that they are actually excited to see him. They offer him a spot in a commercial for tea made out of panda poop and a commercial for anti-fungal and jock itch. Johnny isn’t interested, so he offers him a commercial for turtle pudding. Johnny likes the turtle pudding idea, and is rushed in to the audition. They have him read the script and tell him he has to take a bite of the pudding, Johnny wants to fake eating the black turtle pudding. He hits a road block when he learns that he has to read the script in Chinese, he starts yelling in Chinese and is sure that he “nailed it.” They tell him that they will call him and let him know.

They all head home and Johnny rushes to tell Alma about his fortune telling bird and the black turtle pudding. He reveals that he didn’t get the gig, and he thinks it is because he wouldn’t eat the turtle pudding. Paul makes fun of him and he tells him how disgusting turtle pudding is, he pulls out a can and dares Paul to eat it. Paul laughs hysterically and tells him that it isn’t made out of turtles, it’s just herbal jelly.