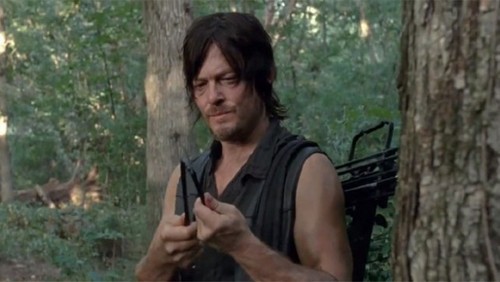 Alright ya’ll, we’re halfway through the Walking Dead‘s Season 4 back half, and it’s been an interesting ride. Unlike the first half of this season, this back half definitely has palpable tension of who’s going to die, who’s going to meet up with who, and who’s going to get eaten by who. Thankfully, we don’t have any more boring Governor episodes, and all the stand-alone character episodes have been fantastic. And now, we’re here with some possible spoilers for the next episode, ‘Still’. So look AWAY if you haven’t caught up on the show, and/or don’t want to know what happens [or technically, what COULD happen].

We haven’t verified the accuracy of these reports, but they seem to come from a legitimate fan page that’s had scoops in the past. According to the Walking Dead Women’s Facebook fan page, Rick, Michonne, and Carl will be meeting up with Daryl and Beth soon, and it might even happen in the next episode. This is somewhat surprising news, especially since Daryl and Beth seemed to be headed in the opposite direction as our favorite trio, away from the ‘Terminus’ signs. Plus, Tyreese, Carol, and the kids all seemed to be headed in the same direction as Rick, Michonne, and Carl, which led everyone to think that theirs was the reunion that would happen first.

Alas, it’ll definitely be interesting to see Beth and Daryl reunite with other people. I hate to say it, but they’re not terribly interesting on their own, are they? Plus, Daryl’s supposed to have a fantastic stand-alone episode coming up, but if they’re going to join another group at the end of the next episode, then I’m guessing that stand-alone episode is ‘Still’?

Also, Beth does NOT die in the next episode, and that we can say with [almost] assured confidence. So for those three people out there who care about Beth’s fate, don’t fear. Your favorite singer in the zomebopocalypse will not meet her end just yet.