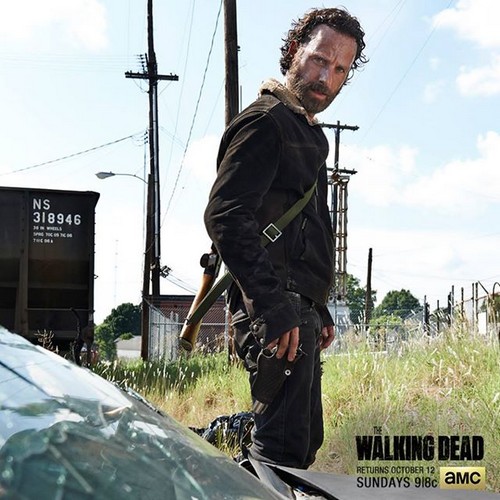 The Walking Dead has spawned many superstar actresses and actors, but the unquestioned king of that show is Andrew Lincoln who plays Rick Grimes. Despite being covered in filth and grime, Lincoln has become one of the most coveted actors on the planet in recent years. Upon starting this fifth season of Walking Dead, his star is set to shine ever brighter. Here are five things you never knew about this powerful new superstar:

Andrew Lincoln is British – Some might say, big deal…but the first time I heard him speak as Andrew Lincoln rather than Rick Grimes, I was stunned. I had no clue the guy with the country slang and twang and cowboy hat was actually from over the pond. It is an absolute shock and miracle that he is able to completely go from one voice to another with such accuracy.

His father-in-law is lead vocalist for the legendary rock band Jethro Tull – Growing up, Jethro Tull was the ultimate rock band alongside Kiss and other powerful bands of the era. Turns out that the head honcho for that band is actually the father in law of Lincoln. That is a mixture you would not expect to see everyday. Daryl, maybe, but not Andrew.

Lincoln is a big supporter of homeless charities – What began as a cause in Britain with the homeless charity named “Shelter” continues to this day. It is rather noble when you see people invest in things like this despite their wealth and success. Many people simply turn off that part of their brain when they make it big. It is clear that Andrew Lincoln has a huge heart for charity.

Lincoln is a legendary cook with the cast of Walking Dead – It is said that Lincoln is the resident chef in between takes and shoots on the Walking Dead set. He has all the guys and gals over to his home for various dishes and apparently is pretty renowned for it. What is not explained is how in the world anyone could be thinking about food after working on a Walking Dead set all day. The zombies eat enough, don’t they?

Shane Walsh really is his best friend – Jon Bernthal, the actor that plays Lincoln’s best friend Shane in the early Walking Dead episodes, really is one of his best friends in real life. Perhaps that explains why the dynamic between these two guys was so powerful from the beginning. Shane Walsh’s character eventually shows his evil colors and turns on Rick Grimes. He is then summarily dispatched and zombified until Carl puts him down for good. The entire Rick, Shane, Carl saga was the lynchpin for the entire series and a big part of why you get so hooked on the stories. This friendship is bound to be a big part of why.