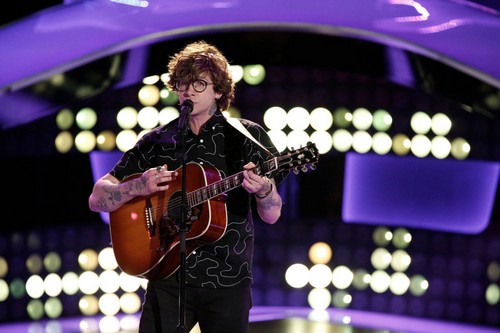 Team Adam’s Matt McAndrew took the stage tonight on The Voice for his Top 4 video performance. Matt sang “Wasted Love” for his single performance. On tonight’s show the remaining artists from each coach, Blake Shelton, Adam Levine and Gwen Stefani’s team performed live for America’s vote and the chance to win the title of “The Voice.” Did you miss tonight’s episode? If you did, we watched it and we recapped it here for you.  Did you miss any of tonight’s videos we have them all right here for you.

Matt is up next with his original single called Wasted Love. Adam says this is a great hybrid number and is an amazing number for him. Matt is excited to not be doing another cover. Adam coaches him and then says he thinks he has a hit on his hand. Matt McAndrew sings for the finals crowd. He’s got a choir backing him which is really cool since it’s such a soulful song.

The crowd goes absolutely wild, the coaches are on their feet. It’s incredible. Pharrell says he thinks all of Philadelphia and the kids Matt teaches are standing up for him now. Gwen says she got lost in the lyrics and she thanks him for inspiring her. Adam says they’ve been working 24/7 on the song and says this is the first time that this has happened. He says Matt sang his own song and that it was amazing and one of the best he’s heard in his life. Adam says he knows all the words already because he’s a fan of the song and Matt. He says – this kid is so special. He says he’s so proud and on the verge of tears.