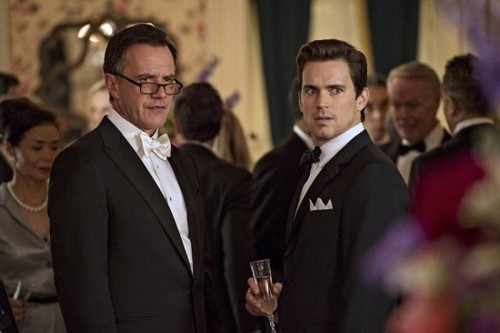 White Collar continues tonight with an all new Thursday November 13, season 6 episode 2 called, “Return to Sender.” On tonight’s episode, The FBI agrees to grant Neal [Matt Bomer] his freedom if he can bring down the Pink Panthers once and for all.

On last the last episode, the sixth season premiere found Neal trying to secure his freedom once and for all by making a deal with the FBI brass. To do so, however, he had to gain access to the leader of an international crime syndicate. Elsewhere, El gt startling news about her future with Peter. Did you watch the last season 5 finale episode? If you missed it, we have a full and detailed recap right here for you.

On tonight’s episode as per the USA Network, “Peter presents Neal’s deal to his superiors at the FBI: Neal will bring down the Pink Panthers in exchange for his freedom. And this time Neal is making sure there are won’t be any technicalities. The stakes couldn’t be higher for Peter either, as Pillar makes it clear that the bureau is intent on bring down the Panthers and Peter could lose his job if Neal’s plan goes south. When Neal finds out that Keller is now part of the Panthers, Peter wants to call off the mission and simply take Keller down once and for all, but Neal knows that this is his last chance. He can’t trust Keller and can’t figure out why he didn’t sell him out to the Panthers right away, unless Keller needs something from him.”

Be sure to stop by here later tonight at 9 PM EST for the live recap of White Collar season 6 episode 2 “Return to Sender.” It’s sure to be a great one, and we’d love to hear your thoughts throughout the show. In the meantime, hit up the comments below to chat about all the things you’re loving about this show.

Neal had attempted to make several agreements in the past that would have allowed him to walk away, freely, from the Bureau but nothing had ever come from it. He would work for them and they would countlessly go back on their word to him. So before Neal targets the Pink Panthers for them, he wants some reassurances.

Neal had Moz drafted up a legally binding document that would guarantee his freedom if he brought the Pink Panthers down. And if the Bureau doesn’t sign on the dotted line then Neal will walk away from the case as is his right. He’s even said so to Peter.

Plus if the bureau tries to maneuver its way out of the agreement once Neal had already done his part – he’s prepared to take them to court. And no one honestly wants to put Moz on the stand. So Peter realized it would be best for all parties to just get the document signed. He brought it to his superiors’ notice while Neal was busy meeting the Pinks Panthers. However, after their respective meetings, both of them were on guard.

As it turns out, Keller isn’t in prison anymore.

Neal told Peter that he saw Keller with the Pink Panthers. When Peter had heard that, he immediately wanted to pull Neal off the case. Yet Neal stopped him. He said Keller had his chance to rat him out to the Pink Panthers and chose not to take it.

And that could only mean one thing with a guy like Keller – he wants something. Keller later approached Neal and it seems Neal’s assumption was right. Keller does want something but for now he’s hedging his bets. He doesn’t fully trust Neal nor does he believe the great Neal/Peter relationship is over. So for Neal to past his test – he has to past the Pink Panther’s test as well.

And that could only mean one thing with a guy like Keller – he wants something. Keller later approached Neal and it seems Neal’s assumption was right. Keller does want something but for now he’s hedging his bets. He doesn’t fully trust Neal nor does he believe the great Neal/Peter relationship is over. So for Neal to past his test – he has to past the Pink Panther’s test as well.

Neal was asked to steal a very expensive stamp and to do that he had to go in undercover this week in order to get his hands on an invitation to black market bidding war. But, he found out he was tad too young to play the part he needed so Peter had to step in to play his father. And although, Peter doesn’t believe he’s old enough to play Neal’s father – a highly killed black market auctioneer managed to be fooled all the same.

And anyways it wouldn’t hurt for Peter to get some practice on being a dad. Peter and his wife haven’t told anyone yet about the baby they’re expecting.

They’re planning on waiting until Elizabeth passes the first trimester. Though Moz did figure it out on his own. He noticed that Elizabeth wasn’t drinking her wine and seeing as he’s claimed to have delivered a baby or two he reportedly knows pregnancy when he sees it.

So the only one in their tightknit quartet that doesn’t know about the pregnancy is Neal. Which ended up being funny because he started to refer to Peter and Elizabeth as mom and dad. It was to go along with his new identity but the parents involved were worried their secret had gotten out.

Later, when Peter and Neal were attending the auction, they walked in and mistakenly thought their job was going to be easy. Security was barely acceptable and so Neal had developed a false assumption. He didn’t know how hard it was going to be to steal a mere stamp until he saw that stamp had its own security.

But a small ploy carried great rewards. Neal had arranged things so that he got his hands on the stamp and ended any future auctions. When the stamp went missing, he had blamed the theft on the auctioneer and that alone should destroy any credibility either she or her organization had in the first place.

So Neal was able to hand over a stamp to the Pink Panthers. Though it wasn’t the real thing and when it came time for Keller to identify whether it was real or not – Keller hadn’t given him up.

Neal has information on Keller just like Keller has information on Neal. Keller was sprung from Russian prison by Interpol. Apparently, he’s working with them to take down the Pink Panthers an in return he’s been guaranteed his freedom. So, for now, neither Neal nor Keller are going to turn on each other.

Yet, one never knows what will happen after they’ve both been released from their contracts. Peter had gotten the Attorney General to sign off on Neal’s plea agreement. So the second he takes the Pink Panthers down – Neal will be free to do whatever he wants.

And god help the world with both Neal and Keller free!