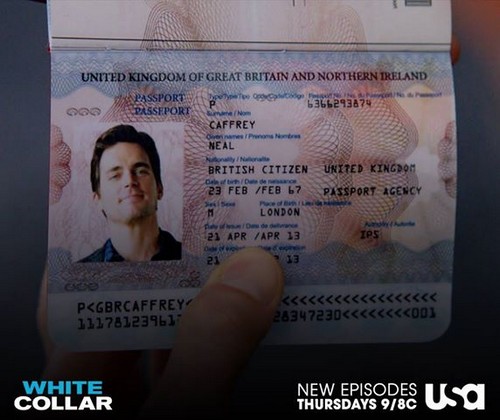 White Collar continues tonight with an all new Thursday November 6, season 6 premiere episode called, “Borrowed Time.” On tonight’s episode, Neal [Matt Bomer convinces Peter [Tim DeKay] to make a deal with the FBI brass, but must first get access to a crime boss.

On last the last episode, Neal and Peter raced against a criminal mastermind to unearth an invaluable treasure hidden in New York. Did you watch the last season 5 finale episode? If you missed it, we have a full and detailed recap right here for you.

On tonight’s episode the sixth season premiere finds Neal trying to secure his freedom once and for all by making a deal with the FBI brass. To do so, however, he must gain access to the leader of an international crime syndicate. Elsewhere, El gets startling news about her future with Peter.

Be sure to stop by here later tonight at 9 PM EST for the live recap of White Collar season 6 premiere “Borrowed Time.” It’s sure to be a great one, and we’d love to hear your thoughts throughout the show. In the meantime, hit up the comments below to chat about all the things you’re loving about this show.

Neal Caffrey is missing but unlike the first time he pulled a disappearance act – this time Neal didn’t leave on his accord. Someone had taken him and now he needs his friends to come to the rescue. However, and unfortunately for Neil, there wasn’t a lot of people at the bureau that was prepared to give Neil the benefit of the doubt. So the moment his tracking device was disconnected – everyone had just assumed he ran.

Although there was one glaring problem with that theory. If Neil did run then he would have taken Mozzie along with him. And here’s the dilemma – Moz is still in New York.
Moz knows the truth. He was able to figure out pretty quickly that something must have gone wrong. He’s Neil best friend and he knows for a fact that Neil would never have left him behind. So he told Peter that someone must have kidnapped their friend. And while Peter wants to believe him – he still has to investigate all avenues.
Hence Peter had to speak to Rebecca. If Neil was actually taken then Rebecca could either be the culprit or the team’s biggest asset in finding Neil. She still loves him after all. So, in spite of his betrayal, she wouldn’t want anyone to hurt Neil.

And funnily enough Rebecca can be helpful. It was one of her former partners that grabbed Neil right off the street. It seems Boots had made some promises to the Pink Panthers. These people are a notorious ring of thieves and Boots had promised them he would deliver a certain diamond.

Now that the diamond is in FBI custody, the kidnapper still needed to pull off a big enough job in order to impress the Pink Panthers. Apparently he wants to join their ranks and to do that he needs to impress them first. And by this point, he can’t turn go back on his promise to them even if he wanted to. Boots has already seen their faces so unless he makes a big heist – the Panthers are going to come after him.

So Neil convinced Boots to free him. He told him that if they (ye, they) were to steal from the Head of the Pink Panthers then it would definitely leave an unforgettable impression. And thankfully Boots bough that idea.

He released Neil, but Neil had told him he was going to need some extra assistance in carrying out the plan. They needed things like supplies and Neil knew the perfect man to turn to for what they needed. They were going to have to stop by Fat Charlie’s place. And, luckily, by time they made to Charlie’s – Moz and Peter were already there.

Neil had left behind clues at the warehouse he was originally taken to. In his message, he named the place he and Boots were going to rob. It was the Kessener building and Moz was able to work with that little piece of information. He knew what Neil was going to need and where he was going to get them in order to break into a building like the Kessener.

Thus, Peter had the opportunity to bring Neil back into custody. But he chose not to take it seeing as Neil was offering him an even bigger bust. Neil had secretly messaged him at Big Charlie’s place that the Pink Panthers were involved.

And the FBI truly would do just about anything to take down the Pink Panthers. Hence Neil was allowed to carry out with his plans and ultimately Peter was able to still arrest Neil’s kidnapper.

Yet none of that mattered in the face of Neil ended up doing with his heist. He use the sting as an audition for the Pink Panthers and he got an invite into their club. And in return for bringing the bureau that much closer to taking down the Panthers – Neil rearranged his agreement with the FBI. He wants his freedom and if he brings down a notorious ring of thieves then he expects to walk away from them after that.

Though don’t expect Neil to suddenly go straight when he’s free. He and Moz weren’t built to have their many talents locked away. And neither was Rebecca. She was allowed to say goodbye to Neil but then she killed herself before she was brought back to prison.

Some people just can’t change. Although it’s going to be fun watching Peter try to. He and his wife are expecting a baby.