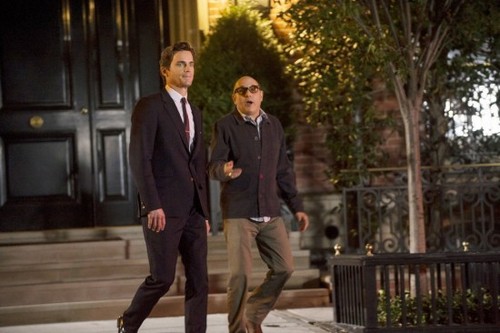 White Collar continues tonight with an all new, exciting episode and the season 5 finale called “Diamond Exchange.”  On tonight’s episode, in the season finale of White Collar, Neal and Peter race to find a treasure hidden beneath New York City before it falls into the wrong hands..  If you missed the previous episode and need to get caught up before tonight’s epic show, then be sure to check out our full recap RIGHT HERE.

On last week’s episode Neal asked Peter to support his request to have his sentence set aside, assuring him that he could truly go straight. As they were packing up evidence from Rebecca’s case, a phone rang with a request to hire Rebecca for a job. Peter asked Diana to impersonate Rebecca and met with the client. Rebecca was brought to the FBI office, where she helped Diana authenticate herself in return for being allowed to talk to Neal. The client wanted Rebecca to steal a thumb drive from a financier’s office, and Jones deduced that the drive contained an algorithm that could cause a financial crash. The financier took the drive to his house.

On tonight’s episode Neal and Peter race against a criminal mastermind to unearth an invaluable treasure hidden in New York.

Be sure to stop by here later tonight at 9 PM EST for the live recap of White Collar season 5 finale “Diamond Exchange.” It’s sure to be a great one, and we’d love to hear your thoughts throughout the show. In the meantime, hit up the comments below to chat about all the things you’re loving about this season. Where do you hope the characters will end up by the end of tonight’s episode.

On tonight’s episode of White Collar, Rebecca managed to outsmart and outmaneuver everyone that tried to take her down. Neil, Moz, and the Federal Bureau of Investigations but after she managed to escape from prison, using the front door of all things; she’s gotten a little bit cocky. It seems Rebecca no longer expects to go out and do the work for herself anymore. Now she expects others to do the manual labor.

Rebecca wa sin the apartment when she overheard Moz tell Neil he knows how to get the diamond. So she could have gotten the last riddle to the codex from Moz when she chose not. Rather than breaking the information out of she chose to inject him instead. Moz was given a virus and only Rebecca has the cure. If Neil wants to save his oldest friend then he’s going to have to find the diamond for her. Peter suggested the take Moz to the hospital but the patient refuses to go. He believes all hospitals are death centers. Moz wants to take his chances the treasure hunt.

Peter caves although he doesn’t like it. He sets his people to work out where Rebecca’s been lately while he helps Neil and Moz find the diamond. Moz was right with the last clue. Little Teddy’s toy had helped him figure out that mysterious letters weren’t for making words. It was numbers and it leads to an address in Queens. However when they reach the stone structure, Moz begins unraveling. At first Peter doesn’t notice it. Its only after Neil points out that his friend is acting strangely that Peter picks on Moz’s behavior.

They’re getting close to the diamond but no one can focus. Whatever Rebecca injected has made Moz deteriorated too rapidly. He passed out before they could even find the diamond. Meanwhile back at the office, Jones and Diana might learn what he’s suffering from. They picked up on a pharmacy break in that happened not long after Rebecca’s escape. Hopefully what they find will be able to save Moz in time.

The guys had to stop their search to be by Moz’s side. The ambulance had to evacuate him but he told Neil to return to the building. Prior to passing out he saw something. Once Peter and Neil realize that they went back and looked at the ceiling. There lies their clue. Following the message the guys happen to find the secret room. Inside, of course, there was a hidden compartment. And yet underneath all of the brick and dirt there was a diamond. Both beautiful and large with only one other like it in the world. But what will happen to it?

Peter wants to use the diamond to lure Rebecca back into prison. Neil contacted her and told he was ready to make a deal. She agreed as long as they weren’t any extra agents at their meeting. Peter had heard Neil’s conversation with Rebecca but he still feels like he can capture her again. Neil tried to warn. He said that it all appeared too easy. And it was easy… for Rebecca. She was never going to meet them at the location.

She decided boxing in the guys would make it easier for her and what better way than to have been following them all along. Then when they found what she was looking for; she drew out her gun and forced them to hand over the diamond. Rebecca locked Peter and Neil up in a gated off area. Neil had asked her for the cure but she refused to give it. She knew better than to hand over her only weapon.

Diana and Jones got lucky though. They saw what Rebecca stole and found the cure for it. The doctors originally didn’t want to give it to Moz until they ran more tests however they weren’t willing to go up against a very angry Elizabeth. She made them rush and thanks to her Moz began recovering almost instantly.

Neil and Peter broke out. Neil was to make a run for Rebecca. He said he knew the best way to stall her while Peter called in for back up. When he showed up, Rebecca was about to catch a helicopter. That is until it was revealed that Neil had stolen back the diamond from her. Again she was just too cocky. She thought she could stand next to a renowned thief and be safe.

He stole it before she even got the chance to lock him up. Neil had exchanged the diamond with one of the stones lying around. And Rebecca couldn’t leave without it and so her ride abandoned her. Everyone knew she was going to get caught. Rebecca tried to fight this fact and in the end she was forced to yield.

Peter took her back into custody and he chose to give the diamond to te State Department. Moz was disappointed to hear the last past. Neil didn’t make anything better when he told Moz that, no; they weren’t going to steal the diamond back either. Neil wants his freedom and he’s willing to live the straight and narrow.

Later on Peter told him that he’s spoken with some people and they’ve agreed that Neil has done great work for bureau. It’s possible that Neil could be released from any agency obligation within a matter of days. Hearing the news makes Neil surer than ever. He won’t risk his freedom for anything now. No more cons.

Sadly, Neil isn’t going to be set free. Peter’s boss realized that White Collar has the highest total of arrest in the whole division. He doesn’t want to risk losing that by letting Neil go. Neither of the guys take the news well. Peter knows he has to stay in the city. He has to keep watch over Neil now more than ever but Neil told Moz he’ll do anything to be free. If that means running then so be it.

There a stranger following Neil around. Neil has noticed him but he didn’t feel like it was a big concern. He only confronted the stranger after getting disappointed about his release. He probably thought the guy could be his new handler. He wasn’t. The stranger and couple of his friends kidnapped Neil.

We won’t know the why or the who until the show returns next season. Still, will Peter figure out that Neil was stolen in time?