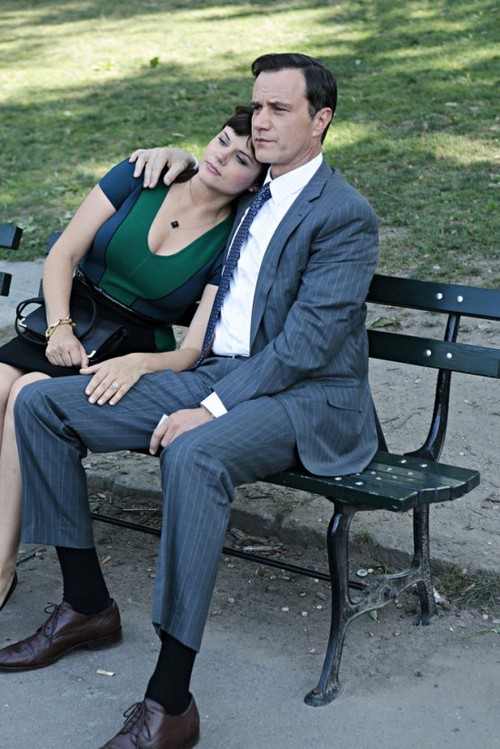 White Collar continues tonight with an all new, exciting episode called “Live Feed.”  On tonight’s episode, a life hangs in the balance after Hagen tasks Neal with his final assignment. This sounds like it’ll be a great episode, so you won’t want to miss it.  If you missed the previous episode and need to get caught up before tonight’s epic show, then be sure to check out our full recap RIGHT HERE.

On last week’s episode Peter’s was thrown back into an unsolved larceny case that had Neal worried – because Neal’s the one who committed the crime.

On tonight’s episode it is the biggest episode left and there is a twist you won’t see coming.  On tonight’s show a life hangs in the balance after Hagen (Mark Sheppard) tasks Bomer’s Neal with his final assignment.

Be sure to stop by here later tonight at 9 PM EST for the live recap of White Collar season 5 episode 10 “Live Feed.” It’s sure to be a great one, and we’d love to hear your thoughts throughout the show. In the meantime, hit up the comments below to chat about all the things you’re loving about this season. Where do you hope the characters will end up by season’s end?

On tonight’s episode his and Neil’s choices come back to haunt Peter. He can’t thinking about all the sacrifices he’s made with his personal integrity but at the same time he’s been offered a promotion in D.C. Hi ssuperiors really want him for the job and all Peter has to do is let go the White Collar division go. While he’s struggling, Jones takes a moment to talk to him. He doesn’t know what happened although he kind of figured it involved Neil doing something wrong again. He tells Peter that he has to move on past this same vicious cycle. The one where Neil does something harmful and Peter has to try to clean up the mess afterwards. Jones tells Peter that he deserve better. Peter should have long been promoted by now.

Neil has his own issues to deal with. He and Moz agree to hold back the decipher from Hagen. They were going to use the piece of stained glass window as leverage when it turns out that Hagen is always a good step ahead. The other man has Rebecca in his custody and he’s only willing to make one bargain- he wants the decipher. Neil agrees to do whatever Hagen wants all the while he has Moz tracking down Rebecca’s location. When that fails they move on to Plan B. Moz has a tracker he wants Neil to plant on Hagen. If it works then the mastermind will lead them directly to where Rebecca is being kept.

Peter tells Elizabeth he’s taking the promotion. However he wants to stay on in the city to finally figure out what happened to Davidson. He has to close that case before he can move on. He told his wife he’s made peace with what Neil did but she told him it was just as important for him to make peace with Neil too.

Neil gave Hagen the decipher to Hagen. He and Moz had run out of time so they cave. Yet they were right to keep the tracker. Hagen didn’t return Rebecca. Instead he decided to renegotiate the deal. He’ll continue to keep Rebecca prisoner in order to get both Neil and Moz to help him use the decipher in unlocking the codex. Neil can’t stay though. After his talk with Elizabeth, Peter called Neil in to do a job. He’s willing to work wih him again and Neil can’t exactly refuse. To do so would make Peter suspicious.

Neil shows up for a forgery case in a tense mood. He quickly snaps out of it when Peter notices he has am attitude. Neil wants to hurry up and work the case when he realizes who the forger o the painting was. It seems they cae upon Hagen’s work and now Peter is excited to be going after the Dutchmen again. Peter is working out a plan to capture Hagen when Neil began to suddenly provoke him. He made Peter so angry that he was dismissed early. Neil left but not before planting the bug on the museum curator. Neil needed to know how far along the case was going and when the feds would make their move on Hagen. If they do it too early then Hagen would think Neil betrayed him and he may never know where Rebecca got stashed.

Neil returns to be at Moz’s side just in time. Moz actually got spooked prior to Neil’s arrival. Hagen had somehow learned his real name. With Neil by his side, Moz was able to recapture back some of his normal snark. They were work together to help decode the codex only to find it an language urecognizable by all three of them. Hagen told the guys they had to break that code in order to get Rebecca back. By this point Neil and Moz are fed up and frustrated. They know Hagen will keep adding to their to-do list and they don’t have time for it. They know the feds are on the way and they have to take desperate measures to get Rebecca back in time. So Neil pours liter fluid on all the documents and threatens to burn everything. They also mentioned how Peter and his merry men are on the way. Both threats genuinely terrify Hagen. He tells his people to let Rebecca go. Once that was done he expected Neil to hand him the lighter, but Neil followed through on his threat. Neil burned all the codex pages they’d deciphered. Moz had looked at it long enough to remember everything.

Neil fetches Rebecca as Moz starts finding possible safe houses. They don’t know what Hagen will do to retaliate. Whatever it is it involves Peter. Hagen stayed in the abandoned building long enough to get captured. He must have done that for a reason.

Neil wants to tell Peter the truth about everything. Rebecca on the other hand wants them to find the treasure. When Neil brought up one of the symbols the codex had revealed, she managed to figure out what the treasure is. She traced the symbol back to an idol that’s been missing for years. The idol holds the twin to the hope diamond. She wants to convince Neil to keep going after the diamond when they were interrupted by a call. Moz told him that Hagen allowed himself to be captured.

Things go further downhill when Neil arrives at the office. Jones had looked up his tracker and saw he was with Hagen all afternoon. This makes Peter listen to what Hagen has to say. Hagen said he could lead them to evidence. He even went as far to imply the evidence could harm Neil. Neil, Jones, Peter, and Hagen arrive at the sight only to never make it into the building. Someone killed Hagen with seconds of him leaving the car.

Now Neil is as clueless as Peter. They have a receipt, found in Hagen’s wallet, to go on and decide to use it. On the back of the receipt there was data on the comings and goings of someone. When they arrive at a mysterious apartment, they see files on everyone they’ve ever worked with including themselves. There was even a file on Seagull. As it turns out the apartment belong to Rebecca. She used it to change into various identities. And to make a bigger fool out of Neil; she used the very same apartment to stage her “kidnapping”. It looks like Rebecca used to be Hagen’s partner.