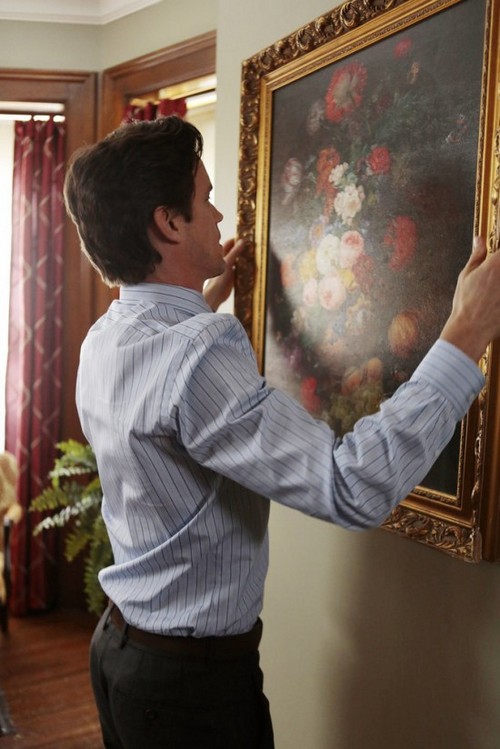 White Collar continues tonight with an all new, exciting episode called “Taking Stock.”  On tonight’s episode, Diana from maternity leave for an undercover sting on a rogue stock trader.. This sounds like it’ll be a great episode, so you won’t want to miss it.  If you missed the previous episode and need to get caught up before tonight’s epic show, then be sure to check out our full recap RIGHT HERE.

On last week’s episode While Neal distracted Rebecca, the FBI search her apartment. Peter concluded that she was actually in love with Neal, and as a ruse called her in and told her that Neal was the prime suspect in Hagan’s murder. She asked Neal to meet in a park; Neal told her he would have to run and she offered to go with him. Just as she was about to say that she was not really a mild-mannered book expert, she detected the FBI stakeout and fled. From evidence in the apartment, Peter determined that she was really Rachel Turner, a disgraced former MI5 agent.

On tonight’s show when a corporate espionage case has personal ties to Neal, Peter recruits Diana from maternity leave for an undercover sting on a rogue stock trader.

Be sure to stop by here later tonight at 9 PM EST for the live recap of White Collar season 5 episode 12 “Taking Stock.” It’s sure to be a great one, and we’d love to hear your thoughts throughout the show. In the meantime, hit up the comments below to chat about all the things you’re loving about this season. Where do you hope the characters will end up by season’s end?

Neil wants to renegotiate his contract with the feds before Peter moves to Washington DC. Neil claims he’s done a lot to help Peter get his new job and even helped close a lot of cases. In return for that Neil wants a recommendation. With what he’s asking he’ll be released from federal custody and will no longer have to deal with a handler. However Peter says he can’t but he will accept Neil’s in helping him packing. Peter has to load every file he’s worked on and it’s a lot of boxes. Peter doesn’t want any hard feelings and this is way for them to say their goodbyes.

After a long day at the office, the boys were just finishing up work when one of the boxes, they packed, began to ring. It was an evidence box in Rebecca’s case. They had confiscated her phone and someone was still trying to reach her. The voicemail said they wanted to hire her for a job. Usually Peter would send in Neil for such a task but he needs someone else this time. Preferably female. Who better than Diana?

Diana is coming off of maternity leave. She admits a slight problematic area to Peter. She has to use her breast pump every couple of hours otherwise she’s sees no reason to not be fully back in the game.

Neil was just telling Moz about his offer to Peter when he mentioned Diana’s return. Moz didn’t know Diana was going back to work so soon.. He’s actually worried about his namesake and what will happen to the little guy. Neil tries to comfort him by saying Diana will most likely hire a babysitter. Moz doesn’t like the idea at all. The baby he helped bring into this world shouldn’t be fostered onto strangers.

As for Diana, she’s gotten back into the grove of things. She played her part as Rebecca very well although there was one thing that slipped past her and the team. Rebecca has a special signal to new clients. The team doesn’t know what it and can only get the answer from out of Rebecca.

They bring Rebecca to the interrogation room. Peter has to be the one that questions her. When he begins with the questions though Rebecca quickly assumed (correctly) that they need her help. So she makes a deal. Rebecca wants to speak to Neil in return the feds will get her signal.

Once they verify Rebecca was telling the truth, Neil went in to meet her. Neil doesn’t have a lot to say. All he tells her is that they’re over. He began to care for the person she was pretending to be. Neil wasn’t actually falling in love with Rebecca.

Diana meets the new target at the park. It’s a crowded and public place which should be safe. But her target is only willing to discuss the deal in private. He makes Diana leave the safety of open area. Jones is till tracking although slowly he won’t be able to see her. Jones has to follows them on foot.

Diana runs into trouble. Her target wants further evidence she is in fact Rebecca. He askes her about a job she had overseas. Peter hears his agent is in trouble and makes Neil get the answer out of the real Rebecca. Neil did but he had to tell her certain things. Like yes he does believe he’s smarter than Peter. Neil was also nearly tripped up. Rebecca wanted him to talk about the diamond. She knows he doesn’t have it yet and wanted to figure out if he was close. Neil confesses he might be although Rebecca won’t be anywhere to see for herself.

Diana came out of her meeting unscathed. Once she got the client to trust, her he gave her all the details she needed to know. Now it’s up to the team to figure out why her client wants to steal a hard drive from a wealthy man. Of all things to steal; why a hard drive? The case gets weirder when Peter tells them how the company owner, Beck, reacted to the news someone wanted to rob him. According to their surveillance, Beck quickly left his office with the hard drive in tow.

Jones suspects the hard drive is caring an illegal algorithm. The type of company Beck runs generally use algorithm for all of their data, but he would only go to great lengths to hide it from the feds if it were illegal. Beck was once their client’s boss until there was an SCC investigation. Beck walked away unscathed while the client was fired. This can all be because of revenge.

If the client got his hands on the hard drive then he make a lot of money and never have to worry about Beck reporting it missing.

Neil and Diana were sent to Beck’s home to retrieve the drive. They were close to going in (against Peter’s orders) when Diana got an emergency call from her nanny. She leaves Neil to go in alone while she rushes back home. Diana didn’t have to rush though. The “emergency” was Moz. He had talked his way into the home and then accused the nanny for incompetence. He says she could have let a killer in. The nanny is furious her credibility was getting questioned by a mad man and so she quit. Leaving Diana with no one to care for her son except Moz. Moz quickly agrees to watch the baby even if he doesn’t like the nickname Diana gave it.

Neil was able to get the hard drive. All he had to was pretend to be the mister (a male mistress) of the wife’s. He had run into Beck’s mistress and they formed a camaraderie based off of their “positions”. She helped Neil get out of the house unseen by Beck.

Back at the office they realize the algorithm helps disturbs the market but Peter didn’t like how Diana and Neil were able to get it. He wanted them to wait until he had at least gotten a warrant. Still they can go forward with what they have. Diana meets with the client and all appeared to be going along with their plans when he suddenly pulled a gun on her. Someone has texted him Rebecca was in jail. Diana managed to talk him out of shooting her and when he let his guard down, she took the gun away.

They’ve got their guy but he blew Diana’s cover. As far as the feds can tell the test was traced back to Rebecca’s prison. They were just worried about how she got a phone in there when not long afterwards they got word she escaped.

Rebecca is on the loose right when Moz figured out the last code to retrieving the diamond. He was with the baby and one of Teddy’s toys helped him figure out the last clue. Luckily, Diana soon came in to relieve him since this allowed Moz to rush over to Neil’s without worrying about Teddy. He was trying to call Neil with the good news and only got voicemail. The normally suspicious Moz was excited and left a message. In the message, he told them they can go searching for the diamond the moment Neil came back. Unbeknownst to him, Rebecca heard everything.

Peter doesn’t want to give Neil his recommendation. He talked it over with Elizabeth and he doesn’t feel like Neil can go straight but Neil told him he’ll just get his freedom on his own. Catching Rebecca again might even help his case.