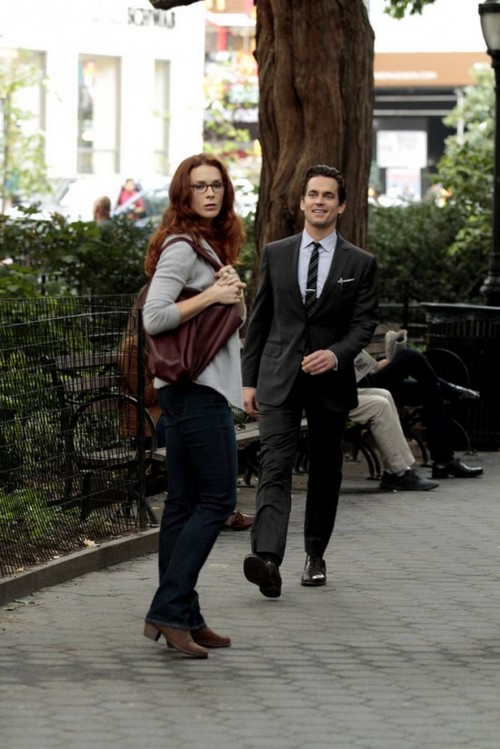 White Collar continues tonight with an all new, exciting episode called “Shot Through the Heart.”  On tonight’s episode, Neal and Peter go after an assassin. This sounds like it’ll be a great episode, so you won’t want to miss it.  If you missed the previous episode and need to get caught up before tonight’s epic show, then be sure to check out our full recap RIGHT HERE.

On last week’s episode Peter was offered a promotion and reassignment to DC, but he was reluctant to take it until he resolved the mystery of David’s murder. Neal brought the panel to a meeting with Hagan intending to bargain, but Hagan showed him that he is holding Rebecca hostage and forced him and Mozzie to solve the puzzle hidden in the Codex. Peter was called to investigate an apparent forgery of a painting by William Blake.

On tonight’s show when Neal and Peter go after an assassin, the stakes are raised even higher when they realize this may be the same person who has been pulling Neal’s strings.

Be sure to stop by here later tonight at 9 PM EST for the live recap of White Collar season 5 episode 11 “Shot Through the Heart.” It’s sure to be a great one, and we’d love to hear your thoughts throughout the show. In the meantime, hit up the comments below to chat about all the things you’re loving about this season. Where do you hope the characters will end up by season’s end?

Neil is reeling from Rebecca’s betrayal. Thinking back on how they met even astounds. He thought it was his idea to target Rebecca back in the beginning and now he realizes that Hagen was playing him all along. They made sure he saw her as target and then they both went to work on him. The only good thing Rebecca’s hideaway reveals is that they believe Rebecca isn’t on to them. She thinks she’s safe and Peter knows they can use that to their advantage. He wants to keep up the charade and as Neil later points out what better way to fool Rebecca then to keep up the pretense of their relationship.

Both Peter and Neil believe she killed Hagen. She most likely spotted him following her one day and knew she had to remove any trail leading back to her. She’s dangerous and Peter told Neil now isn’t the time for secrets. It’s essential he knows everything. Like why did Rebecca team up with Hagen to use Neil. Neil had no choice. It was for the best to reveal the tidbit about the twin to the hope diamond.

What Rebecca did has affected everyone. Elizabeth was thrown when she found about Rebecca. There she was thinking the two of them could even have become friends when she learned the truth. And yet Rebecca had a file on her as well. She was willing to use whoever she needed to get her hands on the treasure. Luckily Peter saw the file and quickly took his wife out of the city.

Moz was hurt in his own way. Sure, he liked Rebecca too, but he was the one that vetted her. He must be slipping if she was able to get passed him.

Rebecca ended up coming to Neil rather the other way around. She had stopped by his apartment wanting to talk. It seems she hasn’t given up searching for the diamond and she’s willing to continue to play the loving girlfriend in order to get. While Neil kept her busy, Peter and his team searched her apartment. The plan was working just fine until an agent accidently triggered her alarm. Rebecca got a warning on her phone and was rushing to leave Neil’s place. He had to think on his feet and the first thing that came to mind was to tell her he was falling in love with her. It did stop her although not for long. It was just long enough for the remaining agents to leave her place looking like they’d never been there.

When Rebecca came home nothing looked out of place. Peter had thrown a menu under the door to make it appear as if that had triggered her alarm system. She didn’t suspect anything after catching the menu on the floor. The agents would have known about it if she had searched the apartment. They had set up cameras inside.

Peter, Jones, and Neil were monitoring her when she called Neil. They made sure he didn’t answer the phone in order to hear her message over the bug. The message was that she loved him too. It’s a bit awkward in the office when the guys hear her confession. Neil wants to dismiss her words when Peter informs him he doesn’t think Rebecca was lying. They see her packing up boxes but it wasn’t for an escape. She was packing away all of aliases. She would only have done that if she wanted to stay Rebecca.

Somewhere during the con, Rebecca fell in love with Neil and the team knows how to use that against her. They set up a sting. The feds made it look like Neil was a suspect for Hagen’s murder. They had called in Rebecca to see if Neil revealed anything criminally suspicious to her. She told him no and the immediately alerted Neil that he was in danger.

Neil played along and claimed he needed to go on the run. He told her it was what he needed to do and that he was sorry he couldn’t take her. After all she simply not that type of girl. Rebecca was going to tell him that she was and provide with proof when she saw the agents watching them. She knew then he was conning her and she made sure to make a run for it.

They couldn’t catch her.

They go back to her apartment looking for more clues when Neil was shot at from the window. He wasn’t harmed in any way. But she inadvertently helped him by shooting at him. He knows she didn’t do it to kill him so she must have been sending a warning. He want back over where he was searching and he found what she was desperate to hide. She had left her money stash behind. Without she can’t run!

Her real name is Rachel Turner and she was formerly MI6. She left the job to go underground. It is where all the money is. And Rachel has always cared about the bottom line. Its how Neil figured out he could catch her. Peter told him not use himself as bait and he had ignored him. He sent her Rachel a message. He told her he still wanted to find the diamond and he wanted to find it together.

She showed up all ready to mistrustful when he surprised her. He was so adamant about wanting to be together that she let her guards down. Right in time for Neil to handcuff her. It wasn’t going to stop her forever. She did have gun.

Rachel could have shot Neil when she instead chose to shoot herself out of restraints. However Neil has ample time to call in back up. They arrived in the nick of time to arrest her. They had found her weapon she used to kill Hagen and that was enough evidence to put her away for murder. Not that this will be the end for her. Rachel called Neil from Prison. She wanted to warn him the game wasn’t over.

Peter is going to take that job in Washington. He thinks it’ll be the best decision for him and Elizabeth. And yet he doesn’t know that it also gives Neil plenty of opportunity. With the one man able to capture him now out of commission; Neil is free to pursue the diamond with Moz.