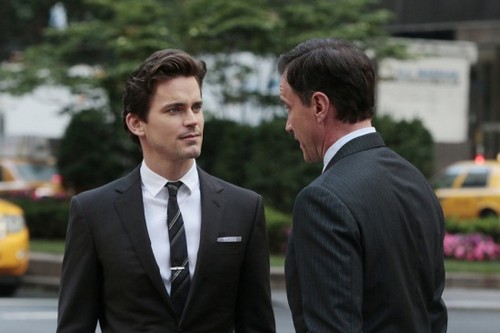 White Collar continues tonight with an all new Thursday December 11, season 6 episode 5 called, “Whack-A-Mole.” and we have your weekly recap below. On tonight’s episode, the Pink Panthers ask for a huge favor from Neal on very short notice; Peter’s family life takes a hit following the murder of a colleague.

On last the last episode, Peter and Neal focused on a case dealing with someone from Mozzie’s past. Did you watch the last episode? If you missed it, we have a full and detailed recap, right here for you.

On tonight’s episode as per the USA Network synopsis, “Neal must orchestrate a treacherous operation for the Pink Panthers on short notice.”

Be sure to stop by here later tonight at 9 PM EST for the live recap of White Collar season 6 episode 5 “Whack-A-Mole.” It’s sure to be a great episode, and we’d love to hear your thoughts throughout the show. In the meantime, hit up the comments below to chat about all the things you’re loving about this show.

Neal had a close call on tonight’s episode of “White Collar”. The Pink Panther suspect they have a leak and because Neal was still new to their team – he was thrown into a surprise questioning session with Alan Woodford. And he’s one of the heads in Pink Panthers’ organization.

Thankfully, though, Neal’s fast talking style got him off the hook. He was able to reassure his employers that he wouldn’t never be anyone’s rat. So, after he had proven his loyalty, he was told about their latest score. Neal was told the Pink Panthers were about go after half a billion dollars. A very tempting amount of money and it would have been a useful piece of information.

Yet, later on, Neal failed to mention what he had heard to Peter and the team. He had purposely withheld info and funnily enough his “friends” had also held back on what they knew.

Peter had already known about how much money was on the line. But he didn’t want to tell Neal because Neal isn’t exactly the most trust worthy guy to deal with. However he painted an entirely different picture of Neal when it came time to speak to his favorite Interpol agent.

Alan is about to cancel the Pink Panther’s latest sting if he can’t find the leak in time. So Peter wants Neal to hand over Keller. Now Peter needed Luke’s permission before he could do so. After all Luke is Keller’s handler. So he convinced Luke that they could depend on Neal. And that’s what got Luke to agree to the plan.

But, Keller had his own talk with Luke and he warned him about how things tend to turn out for everyone surrounding Neal. I.e. not good!

So Luke ended up wanting to call off the whole deal with the FBI. He told Peter he couldn’t take the risk of betting on a guy like Neal. And Peter wanted to prove him wrong. Though, when he went looking for Neal – he couldn’t find him.

Earlier Neal had warned Peter about the major firearms the Pink Panthers were prepared to use on the heist. And he kept holding off on introducing Moz to the organization because he felt they were too dangerous for his friend to be near. So his Peter and Moz were left worried when Neal had disappeared on them. Yet he wasn’t floating in a river somewhere!

Neal had used Moz’s latest invention, a randomizer, as a safer option to persuade the Pink Panther into giving up on using guns for their upcoming heist. That’s the benefit of the randomizer, they could just use that to manipulate the system that tells whoever to drop off the money at wherever.

Alan agreed to the plan and that left only one thing for Neal to do. He had to come up with a means of transporting the money from the airport to a second location. And that’s where Peter comes in. Peter was asked to help Neal and Moz find a means of transport.

Peter came up with the old mailing tubes. And once Neal had Alan on the idea – he then had to talk Alan’s men into trusting him. The other guys were a bit weary around Neal. To them, he came out of nowhere and suddenly he was at the head of the class. So they mistrusted him but Neal was able to get them to warm up.

Though, Neal hadn’t expected Keller would eventually make a reappearance. And that’s because Keller had showed up for a meeting with Alan when he wasn’t supposed to.

Apparently, Keller decided to save his own skin by choosing to name someone else as the mole. And when Neal and the rest of the guys met up for an impromptu meeting – Keller had already made his move. Alan was told to mistrust one of his closest friends and when Keller had “arranged” things to make said guy look guilty – Alan was forced into killing a friend.

Keller had told Alan about where he could find Luke and Alan then killed an Interpol agent in order to get his hands on his tracker. By time Alan had used the tracker – Keller had planted on Alan’s most trusted ally.

So the team was down a man. And they needed to make up their numbers but Neal didn’t want to bring Moz into it. Hence he recruited Peter.

Peter is going in undercover and hopefully he’ll come out of it alive!